A few weeks ago when the weather was cool (before it got warm again and then cool and then warm...you see the cycle), I decided to make some soup.  I had seen this great looking lentil recipe on Brittany's site and knew I had to try it.  So, one Sunday after church, I pulled out the crockpot and started cooking.  I wanted to eat it for supper, so I increased the heat to high, thinking that would help it cook faster. 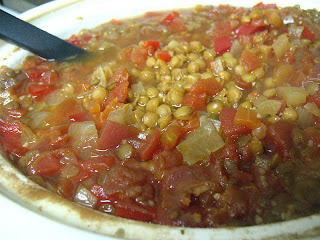 Wellllll, all it did was make the crockpot overflow!  Yes, it bubbled over and I ended up having to was the insides of my crockpot.  Maybe I'll try those liners one day.  :-)  Anyway, I turned the heat down to low, like the recipe called for and let it cook for the full time.  Thankfully, I had some distraction and just had a late supper.  It was SO good!  I ate it for days, sent some home with my parents, and have some frozen in the freezer for later when the weather turns cold for good....or not!  Try it out! 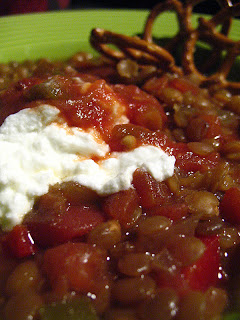 Slow Cooker Lentil Chili from A Healthy Slice of Life

8 cups stock/broth (I used chicken because it cost less but to make this vegan use veggie stock)
1 package dried lentils
1 medium yellow onion, diced
1 large red bell pepper, diced
2 cans diced tomatoes
5 cloves of garlic, finely chopped (or cheat and use pre-minced garlic like Brittany and I did) 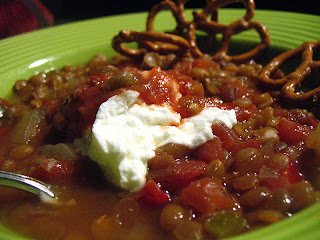 Rinse your lentils well, but no need to soak.  Chop the onion, pepper, and tomatoes.  Put these, lentils, and broth along with garlic and chili powder into your slow cooker.  Set on low and go do something fun.  Let it cook for 8 hours.  Serve with yogurt atop.  Enjoy!
Posted by Unknown at 2:17 PM

That looks nice and easy - I'll have to give it a try - thanks!

Also, re: the liners, I use them sometimes but I've found that they really radiate the heat and make everything cook hotter. I've had things burn in bags that normally I'd have no problems with.

Mmmm this sounds awesome. Heart lentils. Those liners scare me... I dont think plastic should get hot like that next to food...maybe its just me?