Saturday, I babysat Luke (who is TWO this coming Saturday...expect pictures!) and while he was playing with his Little People Farm, I decided to test his animal sound skills.  He's pretty good...cow, horse, sheep, pig, dog, cat, bird...I started running out of animals.  So, I decided to see if he know what monkeys say.  Nope!  So, I taught him..."ooo, ooo, ooo."  He said he was going to tell his mama when she got home but ended up just looking at me, grinning and saying "No."  :-)  Oh...and he wanted to leave with me when I went home.  Sweet boy! 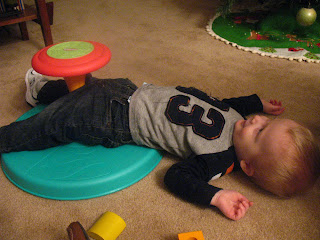 Over Christmas, I decided to make some monkey bread to take to work since we were stuck there six straight days.  I had seen some people decorate the monkey bread as a wreath; I thought this was cute and tried to but didn't want to buy a whole box of  Fruit Roll up just to make the ribbon, so I just put "holly berries" on the "wreath!" 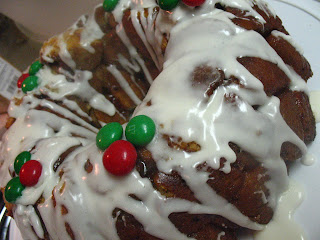 So, monkey bread...that's not so special...except that I changed it up a bit and used cinnamon rolls instead of biscuits to make it.  It definitely gave a fun and different taste to this monkey bread.  If you're in the mood for a breakfast treat, try this one out!  And please stop by Lisa's for more great treats! 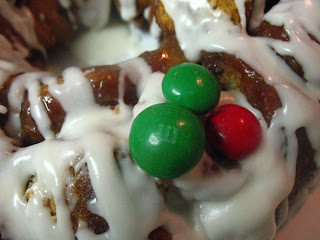 Preheat the oven to 350.  Mix the 3/4 cup sugar and cinnamon together. 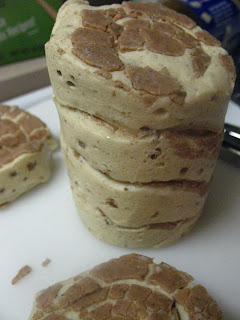 Open the packages of cinnamon rolls and cut each roll into quarters.  Put these into a container with a top (or a bag).  Pour the sugar mixture in and shake to coat. 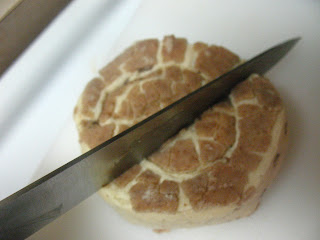 Spray a bundt pan (or tube pan) with cooking spray and put the quartered rolls in it.  In a small bowl, melt the butter and mix the remaining sugars into it.  Pour this over the cinnamon rolls.  Bake in oven for 35 minutes or until biscuits are browned and beginning to "crisp."  Remove from oven and allow to cool.  Remove to a cake plate or your transporting container.  Spread the icing on top and decorate (or not) as desired.  Enjoy!
Posted by Unknown at 6:14 PM

That's a lot easier than the start from scratch.

Your bread is so pretty. I love what you did with the M&Ms. I hope you'll come by and link this up to Sweets for a Saturday #3.

Cinnamon roll monkey bread ! That is amazing. My hubby can't shake his love for cinnamon rolls from a tube. He would adore this.

that monkey bread looks delicious! love the icing dripping over the edges...