I LOVE buying those big bags of bananas that are "ready to eat" (though really overly ripe if you ask me) because they are perfect for baking!  However, sometimes I want to try sometime other than banana bread.  The other day, I wanted something a little fall-like as well.  For some reason, banana cornbread popped into my head. 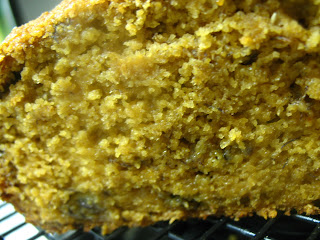 So, I went in search of a recipe and found this one.  The picture on Ashley's blog looked SO good that I decided to try this one.  However, I had a bit of a problem...no maple syrup.  No biggie, I decided to use molasses.  So, where I used molasses, the original recipe used maple syrup.  It turned out to have a nice texture and just enough molasses flavor.  The banana wasn't overwhelming and you might not really know it was there if you weren't told.  However, put a little butter on this and it is some FANTASTIC cornbread!  Try it out!  Thanks, for a great recipe Ashley! 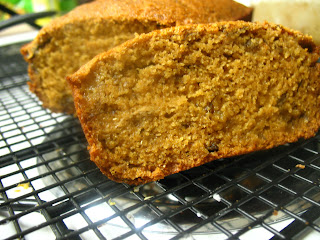 Banana what is exactly what I said.

mmm I love corn bread when it is just a little bit sweet. This looks tasty

Claire, I love your new theme and layout, it looks amazing and room for bigger 'yummy' photos, like this moist and awesome looking banana bread!

YUM! Not too sweet . . . definitely has that cornbread kind of texture to it, you can taste the bananas but not overly so. My daughter told me it's the best bread ever! She does tend to put an exclamation on everything though. ;)