My Mouth is Happy!

Long ago.......seriously......17 years ago, I lived far, far away.....seriously........in Bishkek, Kyrgyzstan.  When I was in fifth grade, my family went to live in a family's apartment and they came and lived in our house for ten months.  My dad taught English and physics (THAT was interesting...teaching physics to students using their second (or third) language! 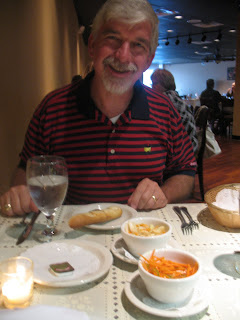 We also worked with some other Americans with the IMB.  While we were there we had MANY opportunities to enjoy the local cuisine.  Let me must tell you, if you even go to a Russian or Kyrgyz house for a meal...don't eat anything beforehand!  They expect you to eat and likely to seconds...if you don't, "you must be ill!"  One house we went to seriously provided a seven course meal! 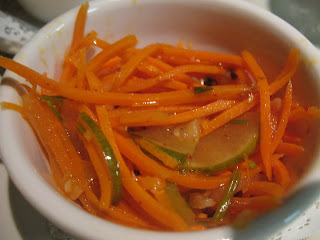 (This is one of the salads we had....pickled carrots and cucubmers...so good!)  Salads, bread, main course 1, main course 2, main course 3, dessert, and tea!  We ate for 3-4 hours....though it was all good, it was too much!  Since leaving 17 years ago, I haven't had any of this delicious food....until Friday night!  We recently discovered that tucked away in Memphis there is a restaurant owned by a Uzbek man (from Kyrgyzstan) that serves many of the dishes we remember.  It is called EuroStyle and was, oh, so authentic!  We walked in and there was a man sitting at the door with an electric synthesizer and microphone singing with lots of revirb.  The floor are wooden and the tables covered in plastic, lace tablecloths (not really as tacky as it sounds).  We sat down at the table and there was a table of women sitting next to us, chatting away in Russian.  A nearby table was for a birthday party...with a bouquet of flowers in the center of the table (VERY authentic!).  We were immediately transported back to Bishkek just by the atmosphere.  Then came the food.  Oh, goodness!  We ordered three dishes to share, but there were others we wanted to try.  First we ordered plov. 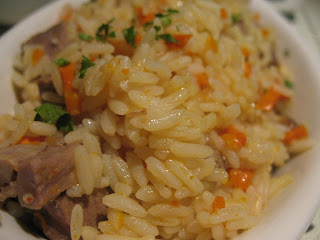 This is a delicious rice dish with carrots, onion, and lamb.  According to recipes I've seen, you should use equal parts carrot, onion, and lamb.  Then the rice is cooked on top of all that without stirring.  It was great!  One thing I liked about this recipe was that it was not nearly as oily as the plov we had in Bishkek.  The only thing missing was roasted garlic!  You WILL see this dish recreated on my blog in the future!  The next dish was laghman, which is apparently the national dish of Kyrgyzstan. 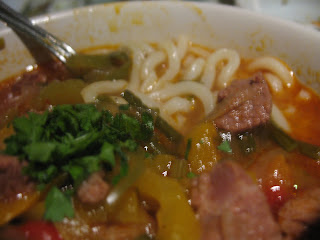 I was SO excited about this.  It is basically a vegetable and lamb soup over HOMEMADE noodles.  Oh my yum!  I'm not big on pasta but these noodles were fantastic!  This was the last thing I had, and my mouth loved it....Daddy did too! 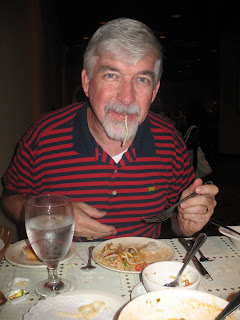 (This picture was posed!)  Once again....at some point, not promising when, this (or a version of it) will appear on my blog!  Finally, the piece de resistance....pelmeini! 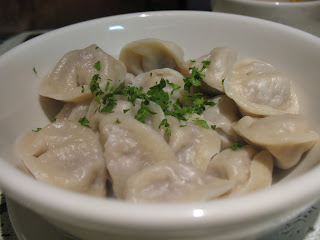 Oh goodness.  THIS was my reaction to pelmeini....I spontaneously made a silly face and just giggled! 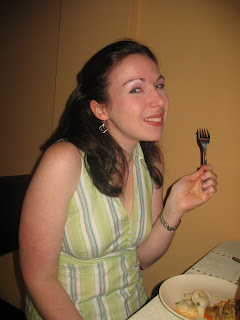 You may think, "oh, but that's just ravioli!"  My dear friends, I must beg to differ!  There is just something unique about the filling of pelmeini that defines it from any other filled pasta.  I don't know what it is but it is delicious!  We learned to make this when we were in Bishkek, but never made it at home. 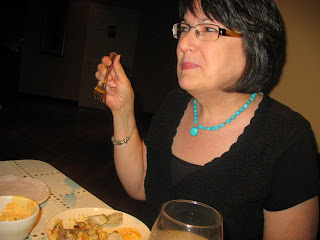 I've got to figure this one out, too.  It is served with smitana (sour cream) but we often added salsa to it.  SOOO very good.  Finally, we ended with blini.  This is basically a dessert crepe. 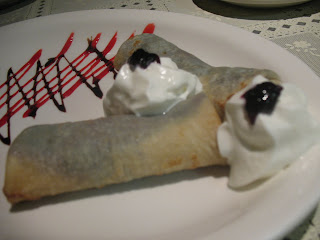 When we were in Bishkek, we would fill them ourselves, usually with honey or raspberry preserves and may dip it in smitana.  These were serves already rolled with blueberry filling and whipped cream.  The blini itself was very good but I left like they really needed to serve it with honey to make it "authentic" in my eyes.  Still delicious!  Another offering on the menu that we wanted to try were the varenki (or piroshki....and bread pocket filled with potato, mushrooms, and/or meat).  These were street foods in Bishkek and were great.  There is another dish called Beshbarmak that we want...and the owner said that if we called him a couple of days before coming, he'd make it for us....but he couldn't use horse like they would in Kyrgyzstan...we're okay with that!!!  :-)  So, if you live near Memphis and want to try Russian, Central Asian, or European cuisine, we HIGHLY recommend trying out EuroStyle.  It is fantastic!!!!
Posted by Unknown at 12:16 PM

Glad you got to eat familiar foods that you missed.