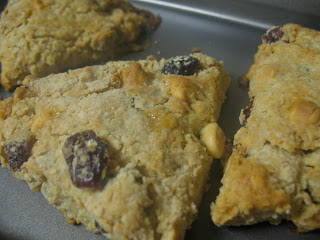 I made them with my friend, Sarah.  It's so funny because we'll both decide we need to hang out and when I ask what she wants to do we usually end up cooking something.  I guess we would rather do something where we could talk as opposed to watching a movie and having to pay attention to that instead of each other (and Luke!!!).  Anyway, after giving her the peach scones from so long ago, she said she wanted to make some. 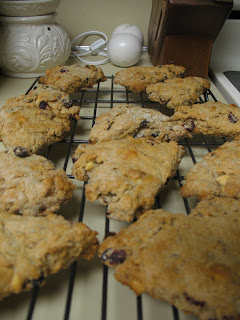 So, I found this recipe from Emily and we went to baking.  This is actually the FIRST scone recipe I've made that has allowed me to form a disc and cut the scones into triangles. 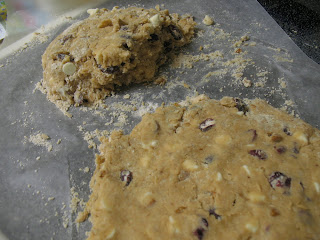 It turned out DELICIOUS!!!  I highly recommend this recipe...and have another scone recipe coming, specially made for my dad this weekend! 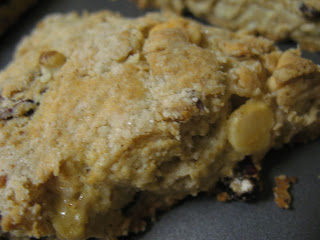 In a large mixing bowl, sift together flour, baking powder, salt and cinnamon; whisk in 6 tablespoons sugar until combined. Knead in butter, using fingertips, until well incorporated and mixture starts to clump together, forming pea-sized lumps. Gently stir in cranberries, pecans and white chocolate chips until combined.
In a small bowl, whisk together 2 eggs, yogurt and vanilla until combined; sprinkle into flour mixture and toss together using a fork.

Turn shaggy dough out onto a floured surface, and gently pat and knead until it comes together, handling as little as possible. Form two (6-inch) rounds. Insides of the rounds should be thicker. Slice each round into 6 equal triangles and place on cookie sheets.

Bake for 20-25 minutes or until golden brown. Cool on wire racks until ready to serve.  Enjoy!
Posted by Unknown at 8:34 PM

I read Emily's blog too.

The scones look nice. Glad you fulfilled your dad's desire!

White chocolate! Love it. And I dig the perfect, classic triangle shape, too.