My goodness! It's almost Christmas. I've only got a couple of more people to get gifts for (would have been one but my original plan for one isn't going to work...grrr). I have two more normal calls and then it's Q2 for six days (call every other day) over Christmas. Another way you can tell Christmas is coming is from all the giveaways going on over the blogsphere. Kelly is giving away an HP touchscreen computer here (as are 4 other bloggers apparently). Sarah is giving away a 2010 planner (gotta stay organized). Tina is having multiple giveaways at her blog. I'm sure there are more...but you'll have to find them on your own. It's just nuts! What else is nuts? This dessert! 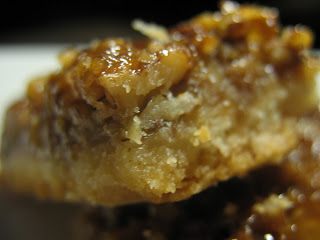 The residents had a Thanksgiving pot luck on Wednesday before Thanksgiving but I wasn't there...I was home. However, I was "guilted" into sending something (after being told it was too bad I wasn't going to be there...I was the one who could cook!). I decided to send these pecan bars. They were VERY good. At first I didn't think that they were sweet enough, but I later decided that they had just enough sweet. 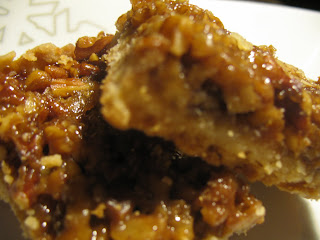 I didn't have enough honey so I substituted syrup for the rest of the honey. This made the filling a little thinner but it cooked up just fine. I think I could eat several of these bars because they aren't that sweet. You could even say that they are a "good for you" (or at least less bad) dessert with the nuts being a main ingredient. :-) I think that alone makes them dangerous. But you'll just have to try them out for yourselves...my fellow residents did, and I was told that there were quickly none left. 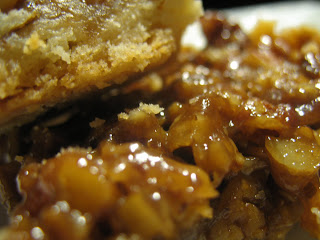 Bake at 350° for 20 minutes or until edges are lightly browned. Cool.

Bring brown sugar, honey, 2/3 (or 1/2) cup butter, and whipping cream (or milk) to a boil in a saucepan over medium-high heat. Stir in pecans, and pour hot filling into prepared crust.

Bake at 350° for 25 to 30 minutes or until golden and bubbly. Cool completely before cutting into 2-inch squares.

Those look heavenly. I love honey in desserts. You're right, it allows just enough sweetness! (Which makes sweet tea the perfect accompaniment. Ha.)

Love honey in baked goods - these pecan bars look perfect for the holidays!