When I went to Sam's Club a few weeks ago, they had a pack of 6 peppers for a little over $6. That's really good considering the peppers were red, yellow, and orange and ONE of these colors in the store is $2-3. So, I picked up the peppers with good intentions. I ended up making some yummy chicken stuffed peppers with them. 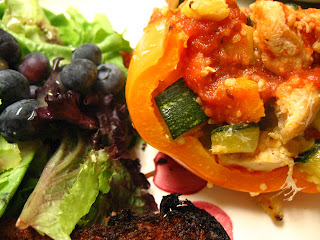 I wanted to use couscous as the grain but only had around 1/4 cup. I know...HOW and WHY!? My mom would say it's the "Nettles" in me! Anyway, these were just perfect except for needing more couscous. So, you really could make them with or without. 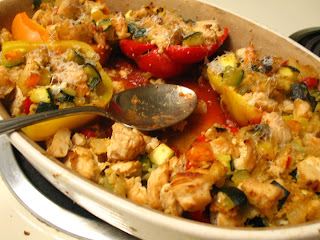 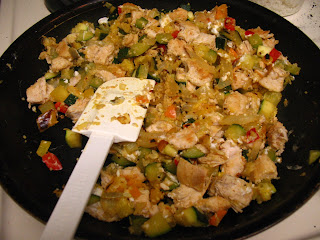 Stir in desired amount of goat cheese. In a large casserole or 11X8 pan, pour some spaghetti sauce. On top of this, place the peppers. Then fill eat pepper half with filling. Any remaining filling should be places around the peppers. 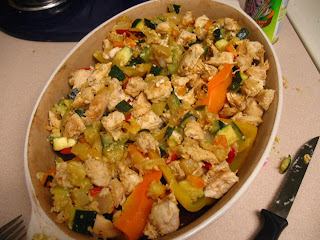 In a 350 degree oven, cook for 15 minutes. When you serve, scoop the spaghetti sauce on top of the pepper when it's on the plate.
Posted by Unknown at 10:07 PM

I passed up a bag of peppers that were on clearance for $1.37 last night - 6 or 7 peppers and every color was in the bag. I usually grab those up but I ended up putting them down. I wasn't sure the baby could handle them. After the last time I ate something with peppers he had some wicked gas.

Looks delicious! Also, I passed on an excellence award to your blog.

Oh Claire, this looks great!
I made grilled stuffed peppers last week. I'm so far behind on my blog it'll probably be a month before I get it posted!

Oh yum, Claire! Those look amazing. It would be hard to pass up peppers at that price!

All these great harvest flavors in one place...but could I substitute feta or jack cheese? Not a big fan of goat cheese.