I love spending holidays with my family. However, this year Easter fell in the middle of one of my rotations, so I could not go to TN, and my parents needed to be at their church. So, I didn't get to spend Easter with them. I was really kind of nervous about what to do about lunch. You see, I knew that my parents' best friends would probably end up inviting me to spend it with them, but I kind of wanted to do something with people my age. So, one evening after our special music I asked a friend who is getting married in June what she and her fiancee were doing. I just assumed that they would be going to eat at her dad's because he lives in Madison. Nope...they didn't have plans. YAY! So, we made plans for them to come to my apartment. I asked a couple of other guys, but they both had plans. My roommate ended up eating with us as well, even though her family lives in town. I decided to make pork loin and almost had a fit because the meat appeared to be the normal cut I got but was really one of those that is cut lengthwise down the center to make two long, skinny loins. 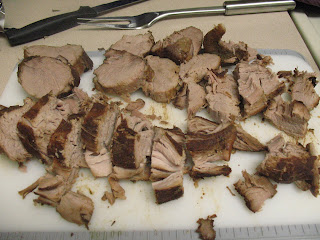 It turned out GREAT though...so flavorful and tender! Matt made green bean casserole 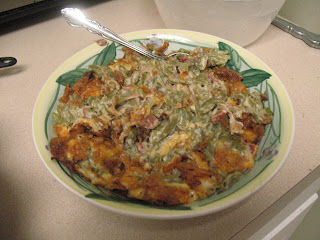 and Kalyn made dirty (or brown as she called it) rice. I had tried a mashed sweet potato recipe but it was, um, gross...so that went in the trash! We cut up a fresh pineapple as well. Then dessert! Ah, dessert. I decided to make an angel food cake. I've done this before; so, when it was time to pour the "batter" in the pan, I thought it looked a little runny but decided to bake it anyway. OH MY WORD! That cake was a disaster. It was flat and oh so eggy. At first, I had no clue what went wrong...then I remember, oops! I forgot to put the other half of the sugar in with the flour. Amazing the difference. 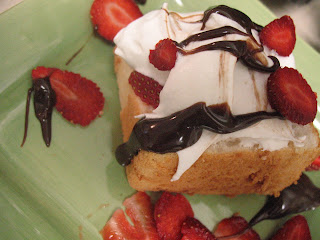 Thankfully, I had purchased and extra dozen eggs to dye (which I ended up NOT doing), so I whipped up another cake, and this one turned out great! We topped it with strawberries, cool whip, and chocolate sauce! A perfect end to a lovely day with friends! 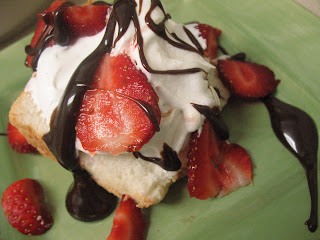 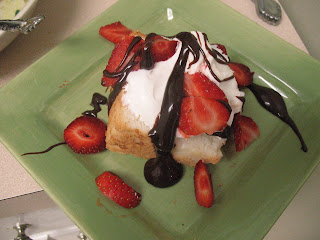 Preheat oven to 325°.
To prepare cake, lightly spoon the flour into a dry measuring cup, and level with a knife.
Sift together flour and 3/4 cup sugar. Beat egg whites with a mixer at high speed until foamy. Add cream of tartar and salt; beat until soft peaks form. Add 3/4 cup sugar, 2 tablespoons at a time, beating until stiff peaks form. Fold in vanilla. Slowly add flour mixture into peaks and fold in. Be sure to fold all the way to the bottom of the bowl to distribute the flour evenly.
Spoon batter into an ungreased 10-inch tube pan, spreading evenly. Break air pockets by cutting through batter with a knife. Bake at 325° for 50 minutes or until cake springs back when lightly touched. Invert pan, and cool completely. Loosen cake from sides of pan using a narrow metal spatula. Invert the cake onto plate. Cut cake into 12 slices.
Posted by Unknown at 9:56 PM

Kristen - I think pork loin (except from my college cafeteria...so dry) is one of the easiest and best "Sunday" meals. It leaves great leftovers, too.