The "I Went Home" Tradition 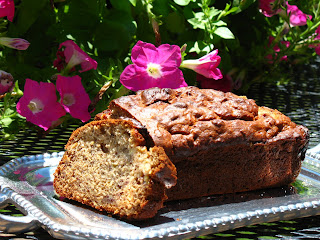 There were frozen bananas awaiting me this weekend. I waited until the last day I was there to make the bread because I wanted to find a new recipe. I tried to find one for peanut butter banana bread and then changed my mind. I found a recipe from Bell's Best II and was going to use it. Then I returned to my original thought and decided I would modify the recipe to make it peanut butter banana bread. Well, I guess I ended up changing it a pretty good big because of a brain mistake. When I measured the peanut butter, in a 1/4 cup measure, I over-filled it and thought "that's probably around 1/3 of a cup. SO, from then on out, still using the 1/4 cup measure, I thought I was using a 1/3 cup measure. When you use it multiple times for one ingredient, that changes the total measures a bit! No worries, the mistake was perfect! 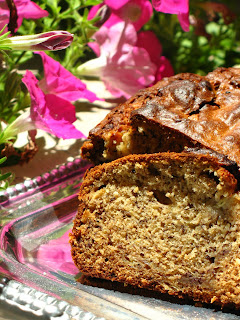 I also decided to try baking this on convection, which I don't really like all that much. Overall, I don't think it changed much...I still baked it for 50 minutes (after checking the bread at 35 minutes and finding it under-done). However, it was perfectly baked. I asked Mama if SHE could tell it had peanut butter in it and she couldn't. I vaguely tasted it, but I think that is becuase I KNEW it was there. If nothing else, it gave a great texture. 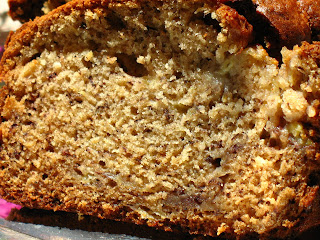 Because both peanut butter and bananas are healthly for you, this is my entry to Sweetnick's ARF Tuesday. Check out her site for more great recipes. 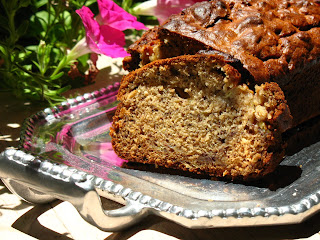 I'm never been able to successfully incorporate peanut butter into a cake or bread. It seemed to work best in cookies and fillings. Of course, now we don't go near peanut butter but pre-peanut allergy, it was a family favorite.

Oh that looks delicious! I'll have to try to add peanut butter next time I make banana bread .. yum!

Cate - Thanks! I may have to try this again so that I can get more of a peanut butter taste.

Paula - I have a cake I want to try and muffins, too. Sad that you can't use it now. Are "you" allergic to all nuts or can you use other nut-butters or soy "peanut" butter. Some of those actually taste pretty good.

Alisha - Thanks! I hope you get a chance to try your hand at it!