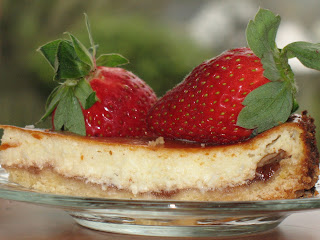 I think one of my kitchen goals this year is to use my springform pan...well, I almost got there! I used my mom's. This month's HHDD, hosted by Peabody, is centered around the theme of Cheesecakes. I decided to take this as an opportunity to make one. 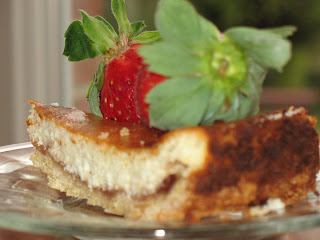 Since it's just me and the roomie, I don't make large desserts often, and cheesecake qualifies as a large dessert. Since I went home this weekend and my mom had friends coming in town today, I decided this would be the perfect chance for me to make a decadent dessert. I decided to use the Hidden Berry Cream Cheese Torte from Dorie Greenspan's Baking from my Home to Yours. 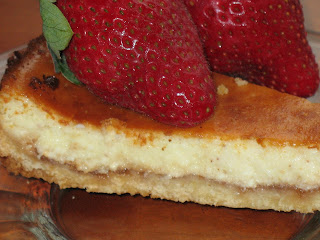 This recipe caught my attention because of the combination of cream cheese and cottage cheese. This is a somewhat lower fat recipe than a normal cheesecake. I did take some liberty in the ingredients. For example, it calls for 9 ounces of cream cheese. Please...tell me where you can buy NINE ounces! SO, I used 8 ounces. Also, I used 33% less fat cream cheese and low fat cottage cheese. Additionally, instead of 2 eggs, I used one egg and the leftover egg whites from the yolks used for the crust...I couldn't stand to waste the whites! Finally, I only used one stick of butter/margarine instead of 1 1/2 sticks in the crust. Apparently, it still tasted good because my mom commented specifically on the crust. 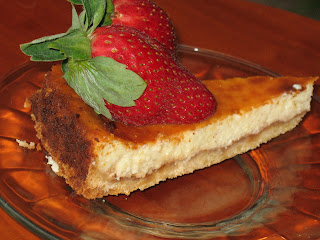 This cheesecake has a really different taste. I thought it had a buttery taste. My dad commented that it was almost custard-like. Both of my parents, after one bite, said it was really good. I think I prefer a graham crust with cheesecake, but Mama liked the shortbread type crust. This was easy to make and a nice change from the often overly rich, traditional cheesecake. Dorie has done it again! 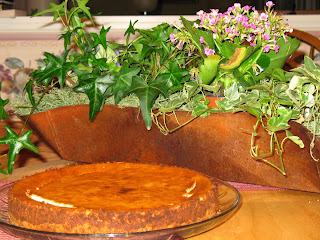 Hidden Berry Cream Cheese Torte
by Dorie Greenspan from Baking from my Home to Yours
Crust:
3/4 cups AP flour
1/2 cup sugar
1/4 teaspoon salt
1 1/2 sticks (12 T) butter (I used 8 T), chilled (I softened mine b/c of the lack of a food processor)
2 large egg yolks
1 teaspoon vanilla extract
Butter/spray a 9-inch springform pan. Put the flour, sugar, and salt in a food processor and pulse just to blend (I don't have one, so I just used my kitchen aid - it worked just fine!). Toss in the pieces of butter and pulse until the mixture resembles a coarse meal (I just put the whole stick in). Stir the egg yolks and vanilla together and add to the mixture until the dough comes together in clumps - don't let youself allow a ball to form! Press the dough into the pan. It should come up 1 1/2 inches on the sides. Refrigerate for 30 minutes.*
Preheat oven to 375 degrees F. Fit a piece of aluminum foil against the crust, covering it completely. Fill the crust with rice, dried beans, or pie weights (I didn't do this because I didn't have any of it!). Put in the oven and bake for 20 minutes. 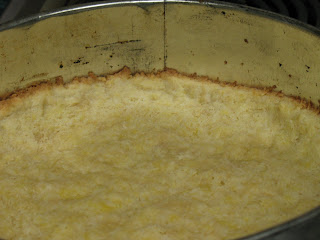 Remove the foil and weights and bake for another 5 minutes, not letting the crust get to brown (OOPS! I didn't see this but no harm done. I don't think the crust needed the extra time, but then again, my mom's oven runs a little hot).
Filling:
1/3 cup thick berry or cherry jam (I used strawberry)
9 ounces cream cheese, at room temperature (I used 8 ounces of 1/3 less fat)
9 ounces (1 cup) cottage cheese, at room temperature
3/4 cup sugar
1/4 teaspoon salt
dash of ground cinnamon
pinch of nutmeg
2 large eggs
Lower oven temperature to 350 degrees F. Put cream cheese and cottage cheese in a mixing bowl and blend (or in a processor and process) for 2 minutes, scraping down the sides of the bowl a few times. You should have a satiny mix. 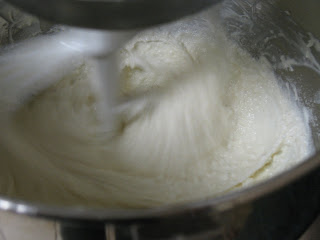 Add the sugar, salt, and spices and process/mix for another 30 seconds. With the machine running, add eggs and mix for one minute. Scrape as you need. Spread the jam over the cooked crust, it can still be warm. 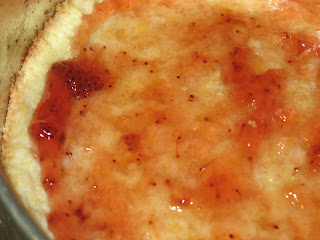 Pour the cheese mix over the jam.
Bake for 60-70 minutes, or until the filling is uniformly puffed and no longer jiggly. Allow the torte to cool to room temperature. The filling will collapse into a thin layer. 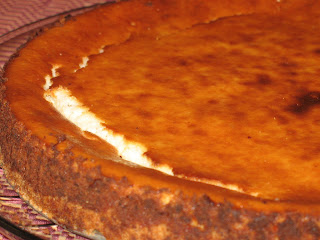 Run a blunt knife between the crust and sides of pan. Open and remove the sides of the pan. Chill slightly before serving. You can dust with confectioners' sugar if you like.
*Dorie says that she likes to roll her sweet crusts. To do this, she gathers the dough into a ball, wraps in plastic wrap and refrigerates for 20 minutes. Then she rolls it and places it in the pan and chills again.
Posted by Unknown at 9:55 PM

That looks great. I have to get my hands on that book.

Wow. Yum. Cheese in any form is fabulous, but cheese in dessert is even better!

FYI, you could have bought 3 3-oz. packages of cream cheese, those cute little ones that get ignored in the dairy case.

Yum - this sounds (and looks) terrific! I agree - I need to get my hands on this book, too.

I have this cheesecake marked in my book, I love that I can see it made by someone else, I think it will be worthy of a try for a different cheesecake and Dorie can't go wrong anyway, I have loved everything I have made thus far from that book, the best investment in hard cover I have made in a while!

Paula - You definitely do! I got it in Amazon for $10 less than the bookstores sell it.

Beth - This was really good. I honestly have NEVER seen those 3 oz. packages, though I've heard of them. I'll have to look for them when I go to the grocery store today!

Gilly - Thanks! The book, IMO, is a must! There are so many recipes I want to try.

Laurie - Do try and and let us know how yours turns out. I think that the book, actually, is quite a steal. For the 30-40 dollars it costs, you get TONS of recipes.

Those strawberries look so nice and summery!

First of all, lovely photos and writing!

Brilynn - Yes...I love the time of year when berries and squash comes back into season!

Kristen - Thanks! I took SO MANY pictures. I'm really starting to enjoy my camera. I bet if you went to my parents' house in TN you'd find a piece waiting just for you! :-)

This looks fantastic, Claire. Alright .. I need to go order that book now. I've seen it used so often lately that I'm starting to be jealous I don't have it.

I enjoyed your step by step photos too. :-)

Your pictures are beautiful as always Claire! The cheesecake looks yummy.
And you know, I don't think I've ever used my springform pans....I keep thinking I will but just never do!

I hate when they ask for 9 ounces of cream cheese...I mean come on!
Looks great!

Alisha - Order it! It's great. I've got some other things that I've made but haven't posted. It's a great book, and, IMO, a great value.

Gail - Thanks. Pull those pans out for Easter. Cheesecake is a perfect Easter dessert!

Peabody- Thanks! I have heard of the 3 oz size but looked in our grocery store and they were nowhere to be found!

I am glad someone decided to make that cake. I have been looking at it for a while but hesitated to bake it. Looks delicious! Thanks for sharing your experience!

I'd say you made some simple and healthy changes in the recipe and came out with a wonderful cheese cake!!

Helene - No problem! :-) It was pretty easy to make and a nice change from regular rich, rich cheesecake.

MKHC - Sometimes the changes are ingredient-delegated and sometimes because I know you don't need as much of something (butter, sugar, etc) as is called for. Given, the full amount probably is "better," but if you start out with the substitutions, no one knowns the difference! ;-) But then again, sometimes it really doesn't make a difference.

I gave the book to a friend for Christmas.I wish I'd kept it. The recipe sounds delicious. Thanks for entering.