After the Bridesmaids' Luncheon, mama and I went to the nail salon to get a pedicure and manicure.  I ended up doing my toes....BLUE!  I couldn't believe it but figured this was the only time I'd do it...so I went for it.  Totally fun! 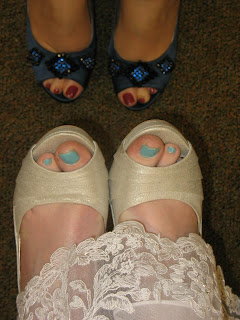 We then got ready for the rehearsal, which went well.  After the rehearsal, D's parents hosted a dinner at a nice local restaurant.  THAT is quite the story.  We hadn't heard from the guy for a while and he wouldn't send us the new menu.  So, finally, after trying to communicate with him several times, D called..."um, he doesn't work here anymore."  Basically, everything he had told us....was WRONG!  Thankfully, no other bookings had been made and the restaurant was great working with us to set everything up in a week.  They even brought me a different dessert since the "planned" dessert was chocolate and I'm just not a huge chocolate fan.  (I think my dessert was better anyway!  Some sort of praline cheesecake...yum!).  The main courses were halibut or steak.  The fish was fantastic! 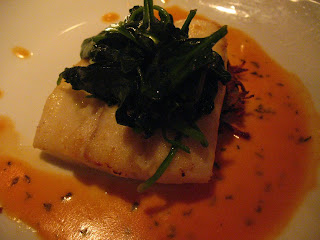 Later, I surprised D and sang him a song - My Own True Love, from Gone with the Wind.  My mom and I have talked about how I would sing that to my future husband at our rehearsal dinner for YEARS....so when mama offered to record the accompaniment so I could do it, I said yes.  D was surprised...and I made it through!  :-)
Posted by Unknown at 3:09 PM