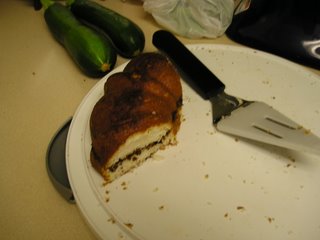 I was in a mood to make something to take to Sunday School this past week. However, I didn't want to do anything "too" involved. This meant I wanted to use...gasp...a mix. Really, I have no problem using cake mixes. Cookies mixes, yes. Cake mixes, no. I had a Betty Crocker Cinnamon Swirl cake mix on hand. I have used this in the past to make cake mix snickerdoodles. It works! But I wanted to make a coffee cake. So...I went in search of a coffee cake mix using this type mix. I couldn't find any so I just spread my wings and flew on my own! 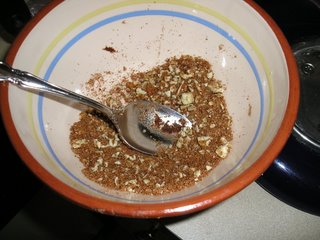 What I decided to do was make the cake with a few changes from the normal cake instructions. Then I chopped some pecans and mixed that in with the cinnamon mixture provided in the cake mix. Before doing this I sprinkled a TINY bit of the cinnamon in the bottom of the bundt pan. This turned out to be a good idea! It put some cinnamon on the top of the cake once it was flipped out. Anyway, I put the pecan-cinnamon mixture in the middle of the cake. I think it turned out well and believe that my Sunday School class would agree. A couple of them commented that it was good, but the cake tells the story...only a quarter was left when I left! 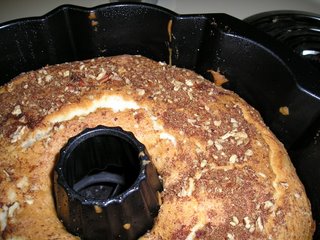 Preheat oven to 350 degrees F. Combine cake mix and remaining ingredients except pecans. Mix on low for 30 seconds and then on medium for 2 minutes. Spray a bundt pan with cooking spray. Sprinkle the pan with some of the cinnamon mix provided with the cake mix. Mix the remaining cinnamon with the pecans. Pour half the batter in the pan. Sprinkle with pecan mixture, reserving some for the top. Pour the remaining batter over the pecans and spread gently. Put the remaining pecans on top. Bake for 38-42 minutes (or as directed on back of box). Remove from oven and let cool. Turn out from pan and enjoy. This cake is good cool or warmed.

*I honestly don't remember the exact measurements of what I used for the buttermilk, water, or oil because I didn't write it down and made it late on Saturday night. So, if you would prefer, use the box instructions for the cake (outside of mixing cinnamon in) and follow this above procedure! Sorry!
Posted by Unknown at 10:11 PM

Glad you found my site, Claire. This coffee cake sounds good. I have a new committment to baking mixes.