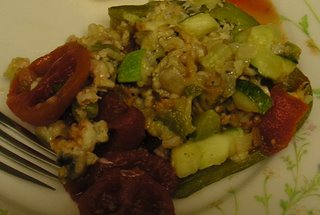 This is one of my favorite meals from home. However, recently I just haven't liked the flavor of ground beef. So, I decided to modify the recipe and use ground turkey. I also added some zucchini and mushrooms. It turned out really delicious! My roommate said it was really good. My only disappointment was that I didn't have any cooking sherry. The grocery store near my house didn't have any and I wasn't going to drive across the town just to get sherry! 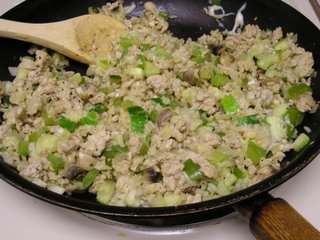 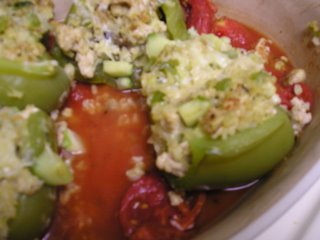 Clean pepper and cut off 1 inch stem end. Cut away stem and choppepper surrounding it. Cut each pepper in half. Parboil peppers for 10 minutes. Saute onion, turkey, peppers, garlic, mushrooms, zucchini, thyme, sherry, pepper, and salt until turkey browns. Fold in rice and cheese. Spoon in to peppers, place tomatoes in dish, arrange peppers on top. Place some cheese on top of each pepper and bake at 350 for 15-20 minutes.

*The original recipe called for 4 peppers NOT cut in half and filled, but this was a little big for us, so we cut them in half. Mama only does two peppers (for a total of 2 halves) but always has leftover filling. I used 3 peppers and had enough to fill them, but if you like ultra-full peppers, just use 4 halves.

**The original recipe did not include these ingredients.
***I didn't measure this but added until I thought it tasted right. Definitely more than a dash!
****The original recipe called for wild rice. This is a really good flavor, but I had brown rice. I added a little curry to it for flavor.

This is my ARF entry at Sweetnicks site. Join in the fun and get your veggies!
Posted by Unknown at 9:31 PM

I love stuffed bell peppers and my mom used to make them as well. Your recipe sounds fantastic and I cannot wait to try it. I love the idea of all the vegetables you added...so tasty and yet healthy! YUM!!!

I was waiting for the pics. They look great. My MIL makes these for us every once and a while when we eat over there so I don't usually bother making them myself. Your peppers look much better than my MIL's.

Lizabeth - Aren't they the perfect little meal? I first added the veggies a while back and basically had a veggie pepper (there was obviously a larger volume of veggies in those!). Then I decided I wanted to try the turkey...it's good!

Paula - Thanks for the compliment. Somehow, these are one of those foods I forget about, but when I remember them I have to make them!

Erika - Thanks! They're pretty easy to do, too. Make great left-overs (I have them b/c it's just me and a roommate!).

My mom used to make stuffed peppers all the time. I modified the recipe and used brown rice instead of white and turkey instead of beef and it's great! Although, now I'd like to find a meat alternative for it...maybe TVP?

Your stuffed peppers look great. I like all the veggies and they are great for leftovers!

Keep up the good work »