Nashville with a Friend

Over the weekend, I spent some time with a friend who now lives in Nashville. I met her at her apartment, which is GREAT! Then we went to eat lunch at Cheesecake Factory. I've never been there except for cheesecake. When I looked at the menu, I started to look at salads, but then I saw in the appetizer section exactly what I wanted: vietnamese spring rolls! The last time I had these was in Chicago at a great little shop called Penny's Noodle Shop (it's near Wrigley Field). Those were better than CF's, but I still enjoyed them. 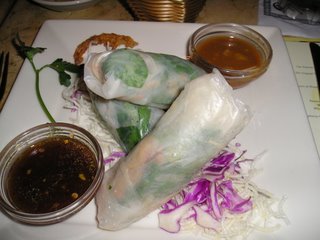 As you can see, they were filled with rice noodles, carrots, asparagus, shrimp, and mushrooms (which I still don't think were in there!) as well as cilantro. They came with a peanut dipping sauce and a soy dipping sauce. I thoroughly enjoyed it at lunch AND supper! 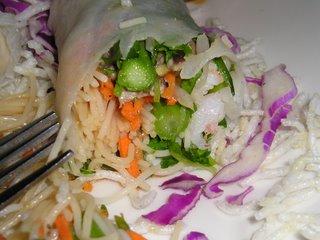 Sarah got the barbeque chicken ranch salad. It is HUGE! The salad comes untoossed with a topping of fried onion rings. I tasted the salad and it was very good. 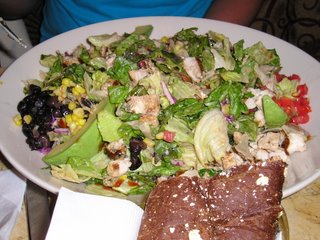 I didn't get a picture, but we both ordered a piece of cheesecake. I took mine home to share with Mama and Daddy. It was the coffee heath bar crunch. It tasted pretty good but should have had more health bar. It seemed that that was just a garnish instead of a big part of the cheesecake. Sarah got some kind of brownie cheesecake. It hink the crust was brownie with original cheesecake on top. All of this was good.

Before we left, I went by Panera Bread to get some bagels for my parents. I got Asiago cheese, Dutch apple and raisin, blueberry, and cinnamon. I think these are the best bagels, although I do not eat bagels much. ON a non-food, side note, Sarah took me to see Vanderbuilt Children's Hostpital! I was great. Nice and bright, family friendly and kid friendly. It made me want o at least go to an away rotation there! We'll see what happens.

After my fun trip to Nashville, I helped with getting moved in. The moving truck arrived on Saturday at 12:30 and didn't leave until 8 pm! That was a long day! My parents are looking for a new refrigerator as the old one arrived with doors that won't shut! It's alright, though. They've had it for 23 years. I think it's time for a new one! I'll try to get a picture when they get it.

Tomorrow I start back to school. Don't really want to, but I must! Such is life.
Posted by Unknown at 10:03 PM

Sound like you had a great time. Good friend and good food. What's better than that??
Good luck getting back into school!

For sure! She's been a friend since birth basically, and I don't see her much so it was nice to get to visit!

Haven't been there in awhile, but LOVE Cheesecake Factory, especially their salads ... might have to make a trip soon. ;)

Cate - I really enjoyed it. I was originally going to get a salad, as my friend said that they are VERY good and always leave left overs! However, when I saw the spring rolls, I knew what I had to get.

Where did you find it? Interesting read » » »