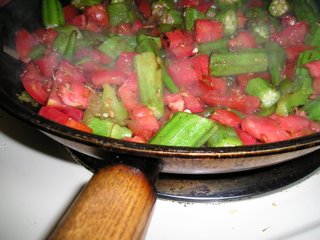 On Saturday when I went to the Farmers' Market, I got okra. Well, I used that to make stewed okra and tomatoes. It's been sitting in my refrigerator all week, and I finally used it tonight. I also made corn bread and put it in my grandmother's cornstick molds as well as a small cast iron skillet. For some reason my camera is not working (AGAIN!), so I don't have pictures of the corn bread. I'll try again later for that. In the mean time, I'll talk about the okra.

For some strange reason I like the slimy quality of okra. I know, call me strange, but I like it!!!Although this recipe was good, the okra didn't quite get soft and slimy enough for me. This may be because I used fresh tomatoes rather than canned diced. So, today while I cooked the cornbread and my fish, I "stewed" the okra and tomatoes some more. I think tomorrow I'm taking cornbread and okra stuff for lunch. Mmmm. 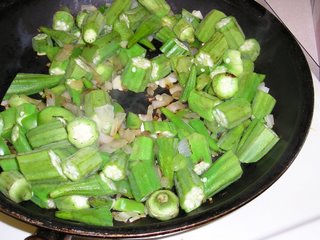 Heat saute pan. Spray with cooking spray. Cook onion until translucent (3 minutes). Add okra, pepper, and garlic. Cook for 5 minutes. Add tomatoes and spices. Cover and simmer for 20 minutes (I increased this time from 10 minutes because it wasn't enough for me. If you want more or less, adjust the time as you desire.).
Posted by Unknown at 8:06 PM

I've never cooked with okra. The only time I have ever had it, was in soup. Actually, I think it was Gumbo. I liked it, but somehow I am intimidated by it. Although, you made it look easy.

I like okra but I've never had any success cooking it myself.

Annie - I must admit that I've never cooked with fresh okra (I've used frozen) before now. My parents have made fried okra, but I've never done it. It's pretty easy though. I LOVE gumbo and think that it MUST have okra.

Paula - I think you just have to cook it long enough adn season it enough. Try it again some time.

Okra is good in gumbo and soups, but my hubby likes it with cooked with tomatoes as you posted here! Your pics are beautiful and I want to peruse some of your recipes later.
I'm from MS too! And wish I had enough time on Sunday mornings to take something to my Sunday School but I don't prepare ahead enough!

Gail - Thanks for stopping by! I love okra in gumbo as well...I guess I really like okra any way! I love to bake, so I try to make time to do some each week. I'm always glad to "meet" other people from MS. Feel free to browse around!

I am a Southern girl, but I have never liked okra and I {gasp} don't like tomatoes either. The only way I have ever tried okra was fried and it was ok, but the slimey version is just not me :)

Cornbread though, yum, I loves me some good cornbread!