We love black bean burgers around here!  It is actually one of our favorites.  I decided to try to make my own version last month.  We had some left over roasted veggies (squash, zucchini, and peppers), so I threw those into the food processor and processed away until they were pureed.  Then I added the black beans and panko.  I cooked these in a skillet though I often try to do them on my grill pan. 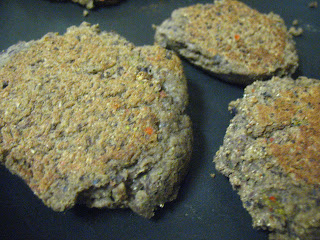 David and K didn't know the difference.  Now, I don't really have to "trick" them as K is a great eater and once she tries most foods a few times will at least eat a few bites.  Oddly enough, she's not a huge fan of potatoes which is fine with me.  And David has been doing a lot better about eating veggies.  However, I do like having the option of getting a few more veggies in us without having to struggle to do it.  So, for those moms out there who struggle with picky eaters, try out black bean burgers.  It will likely be a hit! 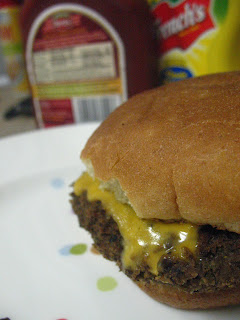 Veggie Black Bean Burgers
1 cup roasted veggies, pureed
1 can black beans (you could add about 1/2 can further if you wanted but I usually do just one)
1 egg (or 1/4 cup egg whites)
1/4 cup Panko bread crumbs
1/4 cup (give or take a little) corn mean - I like adding this for a little crunch when it cooks, you could use all bread crumbs if you wanted to
Tony's cajun seasoning

Puree veggies.  Add the beans and pulse until blended.  If you want some whole beans, add an extra half can near the end.  Add egg and pulse until mixed well.  Add seasoning and bread crumbs and corn meal.  Add until it holds together well.  If using extra beans, stir in at this point.  Heat a skillet on the stove over medium heat.  Spray with cooking spray.  Cook until browned then flip (about 5-6 minutes per side).  Enjoy!
Posted by Unknown at 8:00 AM