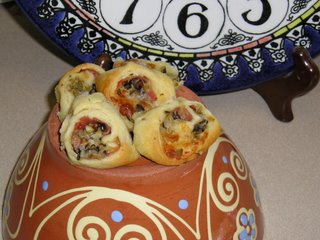 When I was little, we would get sandwiches from Sal and Phil's that were SOOOO good. Little did I know that this was the classic muffuletta. Fast forward 20 years and I have to turn in some recipes for a Mortar Board smorgasboard cookbook. I decided that I wanted to make something different. My idea...a muffuletta pinwheel. So, my loving mother finds an olive salad recipe, and I use that as the filling of the pinwheel. Today, the clinic I am working in had a farewell party for a nurse, so I decided to take these; however, I didn't have all the ingredients I needed, so I modified the recipe. This is a better recipe and more my own. If you need a simple, delicious appetizer and like muffulettas, this is for you! 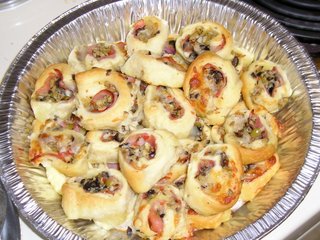 Preheat oven to 375 degrees F. Chop the olives (both). Mix with garlic, garlic powder, and olive oil. Open the crescent rolls (there are four "rectangles" per package). Press down each rectangle until slightly larger than it started. On one long side place the ham (torn in half). The ham should cover the long side. Take half a slice of cheese and place of the ham (this is torn in half as well). Spoon some olive salad over this. I didn't measure how much, but if there is too much you'll know; it won't roll! Sprinkle the extra cheese on this if using it. Roll from the stuffed side toward the other. Use a serrated knife to cut the pinwheels. Place in a greased round cake pan (as you would place cinnamon rolls) almost touching. Bake for around 11 minutes or until slightly browned. Remove and enjoy!

That looks divine! I saw your post on my sister's blog (alicat) and I am writing this down to make for the hayride! Thx

Glad you like the looks...I hope it works out! let me know. I'm actually making it myself next week for a surprise B-day partys! :-)

These are incredible! I made them for Thanksgiving and they disappeared so quickly that I only got one! I've already had a couple of calls asking for the recipe. I added a little salami to the recipe since I usually use it in Muffuletta sandwiches and it really added a lot of flavor. Thanks for the great recipe!