Several weeks back, David found a recipe on a Kroger publication of all places!  It was for Moroccan quinoa.  He's not a big fan of quinoa but Kate and I both like it.  She actually said "I love quinoa" last night.  :-)  So, if he suggested it, you better believe I'm making it.  It really turned out GREAT!   I ended up leaving out the corriander because all I could find was corriander seeds.  Forgive me, but I am NOT crushing my own seeds!  The spices I used were paprika and cumin.  With just that it turned out SPICY.  I guess it's the paprika?  I also added some bell pepper.  I just felt like it needed some veggies in it.  Looks like a great dinner to me?  Try it! 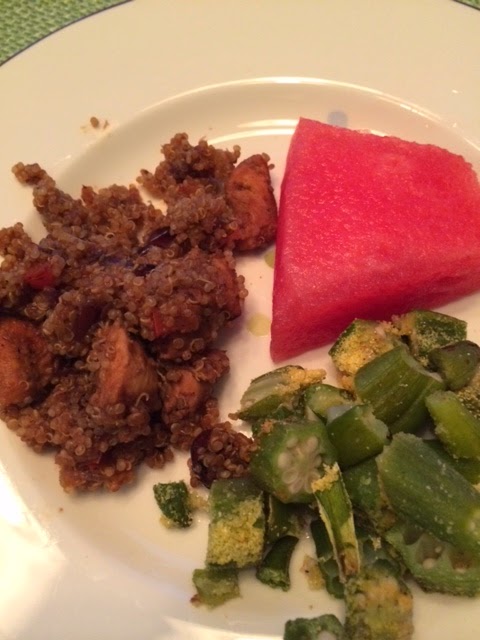 In a medium bowl, combine the paprika, cumin, salt and pepper.  Toss in the cubed chicken.  Once coated, place chicken in a pre-heated skillet sprayed with cooking spray (or a small amount of olive oil).  Cook until browned.  Add the onion, bell pepper and craisins.  Add lemon juice at this point (or the thinly sliced lemon).  Cook until the onion is softened.  Add the quinoa and stir for about two minutes.  Then add the veggie stock and more lemon juice.  Raise heat to a boil.  Then cover the pan and lower heat to medium low.  Cook for 20 minutes, covered.  I cooked about 30.  Remove from heat and let cool five minutes.  I meant to top with sliced green onion but forgot.  Oops!  Fluff the quinoa gently and enjoy!
Posted by Unknown at 10:00 AM