October 4th.  Yes, it really is October...and 90 degrees!  Sigh.  I love fall but unfortunately there isn't much of it around here.  Thankfully, in a few days the high is 75 (though I'm sure not for long).  However, for those of you who are blessed enough to have actual FALL weather, I have some good and easy recipes coming up for you.  About a month ago, I was sitting in clinic waiting on patients to show up (yes...sometimes it's the doctor who does the waiting. ;-)  ) and found a recipe for eggplant lentil skillet.  I showed it to my boss and she agreed that it looked great.  Not five minutes later (still waiting!) I got a text from David who asked if I thought I'd like an eggplant lentil dish.  Ha!  My hubby knows me so well.  I told him that I had already pinned it and we WOULD be having it on our dinner menu the next week...and we did!  Now, if you've been actually reading my posts, you would know that David 1 - likes meat, especially ground beef, 2 - is NOT a veggie fan...BUT 3 - likes for me to have meals that I enjoy, too.  So, I made this meal the next week.  Are you ready for this...David liked it! 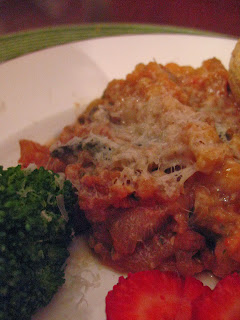 You cook the eggplant enough that it is very tender and, if you get a good eggplant, it doesn't have a very strong flavor.  He even liked this dish better than the crockpot Indian chicken I fixed the next night.  YES!  I have landed on some veggies that we can all eat.  I would be a bit more careful next time which lentils I used.  I have about half a bag of red lentils left over and used those.  They are very soft and didn't hold up as well as I would have liked...but I still think I'll be making this one again.  A veggie meal my family can agree on!  And for your viewing pleasure K's "pascal" face. 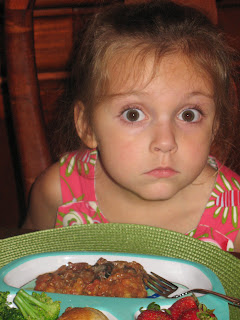 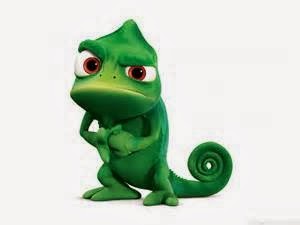 - Saute the onion in a large, non-stick skillet until it begins to brown. Tip: Add a small pinch of baking soda to speed up browning. Add the garlic and cook for another minute. (SO glad to know this! - it works!)

- Add the eggplant, water, and herbs and stir well to coat the eggplant with the seasonings. Cover tightly and cook until the eggplant begins to soften, about 6 minutes, stirring frequently. Add all remaining ingredients .  Cover and cook for 10-15 minutes, until eggplant is tender and sauce has thickened. Season to taste with salt, add fresh basil, and serve over brown rice or other whole grain.Top with Parmesan cheese as desired.