I changed divisions within the pediatric department in July.  It's not what I originally thought I'd be doing but it was definitely an opportunity given to be by God!  I have been working in the pediatric neurology clinic and the people I work with are great!  My division chair is so helpful and encouraging, always available to help me and so supportive of family.  One of the other physicians I had worked with in the past and so was excited to work with him again.  He is a great teach, hilarious, and helpful.  The whole department is like a family...see my crazy and fun co-workers?! 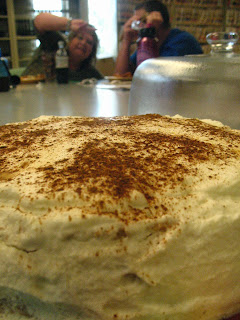 So, when it was Brad's birthday, we all got together for lunch.  I decided that was the perfect time to make my Daring Baker challenge for the month...a Tres Leches cake!  Inma of la Galletika was our Sept. 2013 Daring Bakers’ hostess and WOW did she bring us something decadent and delicious! Pastel de Tres Leches or Three Milk Cake, creamy yet airy, super moist but not soggy.. just plain delish! 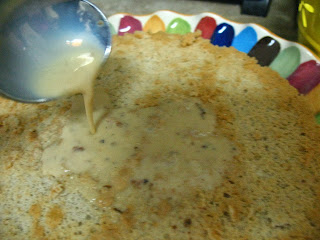 The cake was very easy to make and turned out great.  I used a springform pan rather than a regular cake pan.  I think this just makes it easier to remove and cut.  When I told everyone that I made a tres leches cake I was immediately asked what the three milks were.  Brad's guess:  goat, cow, and...well, something wrong!  The recipe calls for evaporated milk, sweetened condensed milk, and milk (though I used almond milk).  Be careful, though, when you make the syrup....THIS is what happens if it overflows! 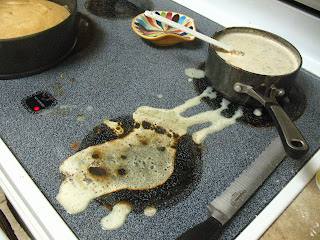 I decided to use cinnamon to flavor the cake, but I was a little unsure about what to use for the filling.  All the examples I saw used fruit but I didn't know what people would want...and was using this for Brad's birthday cake.  So...I decided to make a nutella cream filling.  I just took a half cup of nutella and mixed it with some of the whipped cream I made for the outside.  I thought it turned out good. Of course, David's comment was that you couldn't taste the nutella.  Alas! 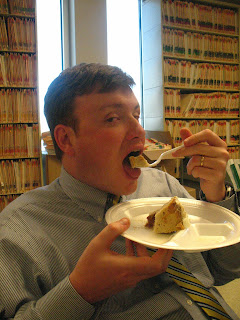 Everyone at the office liked it.  The description was "like tiramisu without the coffee."  Brad even said that, after having five cakes that day, this cake was his favorite!  Thanks, Inma, for such a delicious challenge! 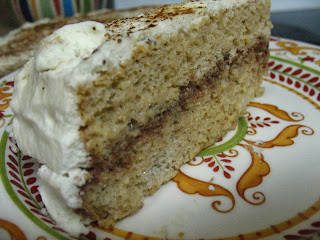 "Like tiramisu but without the coffee" is a great description for this cake! And if yours won out over 4 other cakes, then big congrats!!