Just to Keep it Real...Something that Didn't Work

I get really upset if what I make doesn't fly.  I mean, I know that I won't make things that everyone likes all the time; but when I pick out a recipe specifically because I think K is going to like it and/or I'm super excited about a recipe, then I get bummed when it doesn't work.  That is what happened July 4th.  I found a yummy sounding fresh corn summer chowder that I thought looked good.  K LOVES corn!  She keeps eating on the cob when all the corn is gone, convinced there's more. 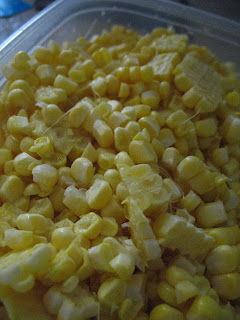 So, I just KNEW she'd like this.  Well, after a fun birthday party, I spent the rest of the afternoon cooking this soup for our July 4th dinner.  I was excited...until we all ate it.  It was more not what I thought it was going to be than not good.  But none of us were fans.  K didn't finish (which definitely means David didn't)...although later in the week she asked for corn soup for supper...thankfully, I had saved it (at David's request) just in case.  I was expecting something thicker and this was definitely more soup like and, as David put it, "tastes like corn" in broth basically.  So, there you go...and "failed" recipe...just to be transparent with my kitchen reality around here!  :-) 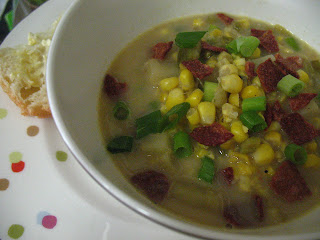 Husk the corn and cut off the kernels. Reserve two of the corn cobs and discard the others. Trim and thinly slice the scallions, keeping the dark-green parts separate from the white and light-green parts.
Cook the bacon in a 3- or 4-qt. saucepan over medium heat until browned and crisp, about 5 minutes. With a slotted spoon, transfer the bacon to a paper-towel-lined plate. Pour off and discard all but about 1 Tbs. of the bacon fat. Return the pan to medium heat and add the butter. When the butter is melted, add the white and light-green scallions and the jalapeño, salt, and a few grinds of black pepper. Cook, stirring, until the scallions are very soft, about 3 min.
Add the broth, corn, corn cobs, potatoes, and thyme and bring to a boil over medium-high heat. Reduce the heat to medium low and simmer until the potatoes are completely tender, about 15 min. Discard the corn cobs.
Transfer 1 cup of the broth and vegetables to a blender and puree. Return the puree to the pot and stir in the cream and all but 1/3 cup of the scallion greens. Simmer, stirring occasionally, for a couple of minutes to wilt the scallions and blend the flavors. Season to taste with salt and pepper and serve sprinkled with the bacon and reserved scallions.