During my studying over the past, oh, five months I must admit that I took frequent breaks.  It's just hard to study all day long!  Two weeks ago, I found a recipe for apple cinnamon monkey bread that looked really good.  I decided to make it for Sunday School.  We used to have some form of breakfast treat each week but haven't recently so I thought it would be fun to take something. 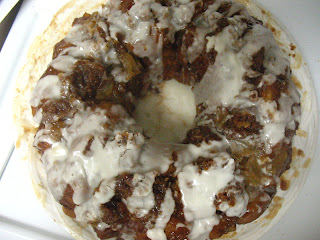 Instead of using the traditional biscuits, this recipe used cinnamon rolls, which I suppose makes it easier since you don't have to toss it in cinnamon sugar.  This is actually a Pillsbury recipe.  It called for granola bars on "top."  Well, I used them but they kind of stuck to the pan...oh, well!  That just means they were super gooey and yummy!  I thought the apple actually turned out great.  It cooked perfectly.  A really yummy fall treat that you can portion as you want!  A couple of pieces for a little treat or several to "equal" a full cinnamon roll.  Try it out! 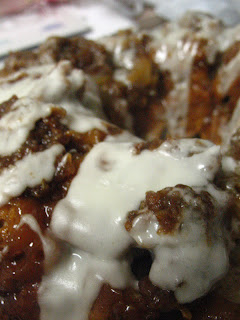 Really a good reciepe. it is gooey and yummy, the apple flavour was super.