Early on in September, I made David some cherry turnovers.  He really misses poptarts being gluten free.  I can't say that I'm sad we don't have those around the house but I do like to indulge him... 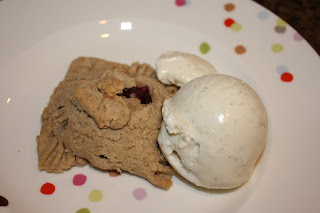 so I made these.  I think he mostly had them for dessert but you could consider them like a big pop tart. 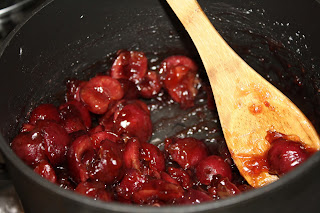 The filling was really good with fresh cherries!  The dough had cinnamon in it, which made it so much better than just regular dough.  It wasn't the easiest of doughs to work with but I made do. 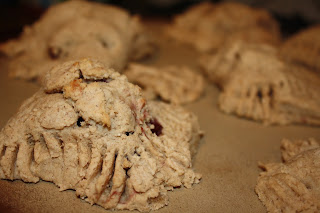 Dough
1 1/2 cup white rice flour
1/4 cup oat flour
1/4 cup almond flour
1/4 cup of sugar
1/2 cup butter (right out of the fridge)
2 eggs
1 tsp cinnamon
1/2 tsp vanilla
6 Tbsp of cool water
In a large bowl mix all flours, sugar & cinnamon together. Cut the butter up and work it into the flour. Beat two eggs, add in the vanilla and water – mix into the flour mixture.  Keep working the dough until all is well blended and you have a nice tender consistency.  Remove from the bowl and form a rectangle – place in the refrigerator for about an hour.
Sweet Cherry Filling
2 loosely filled cups of sweet cherries (pitted & halved)
1/3 cup brown sugar
1/4 cup of water
2 Tbsp of tapioca flour
1 tsp cinnamon
Mix all ingredients in a saucepan over high heat.  Bring to boil and then reduce to low heat and simmer. Cook for 12-15 minutes, stirring often so that it doesn’t stick.  Once cooked, remove from heat and allow to cool completely. 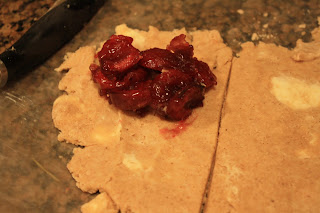 Assembly:
Separate dough into several pieces.  Roll out into a long rectangle.  Top one half with cherry filling then fold the other half of dough over and seal well with a fork on all side.Place on a baking sheet.  Then place the sheet into an oven preheated to 350.  Bake for 22-25 minutes. Enjoy!!
Posted by Unknown at 8:00 AM