So, I had an ultrasound scheduled the day after my due date to check to be sure everything looked good going into the weekend.  I had not had any changes in how I felt or contraction frequency (YES!  I had been having contractions for MANY WEEKS and even had two nights where I was up with some discomfort - though I now know that it was really NOTHING compared to what people really mean when they say discomfort with contractions - with no changes); so, I expected that we'd be going for the ultrasound and then heading out for a fun morning of going to brunch and shopping!  David had even brought a bunch of coupons.  We went into the ultrasound room and she immediately saw Caleb "practicing breathing," his heart looked great and his movements were good.  She tried to get some pictures and we actually saw his face briefly (it actually looked exactly what he looked like...chubby cheeks and round!).

Then she moved on to the amniotic fluid measurements.  Despite being a doctor, I have NO CLUE how much fluid there should be; all I know is that I thought "that looks like really small spaces."  After that, we waited.  My doctor's nurse brought us back and said that Dr. Brantley would be here soon.  Hmmm...I didn't think that was part of the plan but okay.  Then after a little while, she told me to get ready for an exam.  Um, yeah...I KNOW that wasn't part of the plan!  When Dr. Brantley came in she said "I didn't anticipate this at all!  Your fluid is low and we need to come in to have a baby today."  Of course, I hadn't changed any...was only 1 cm dilated (I had been this for 2 weeks).  So, I'm in shock.  Then she says, "And I'm not going to be in town this weekend so the on call doctor will deliver you."  More shock... 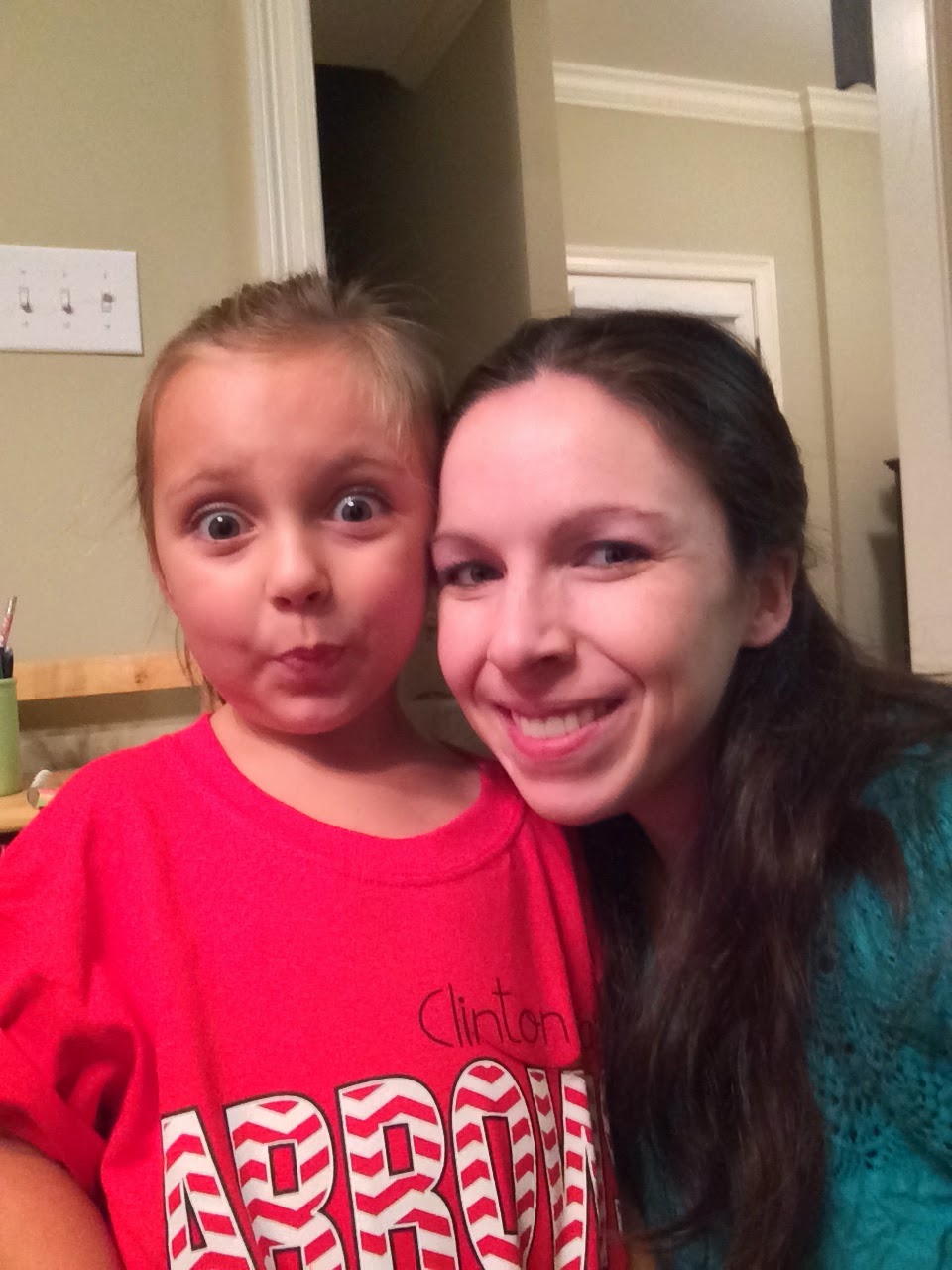 (With Kate that morning.  No CLUE it would be the last before Caleb)

When she left to get everything set up, I just fell into David and started crying!  Yes, I was ready to meet my baby...and had been for a while.  But I didn't anticipate that EITHER...and wanted to go get brunch!  Isn't that silly...I was crying because I was missing brunch with my husband AND my doctor wouldn't be there.  I knew everything would be okay...but I wanted brunch and my doctor! 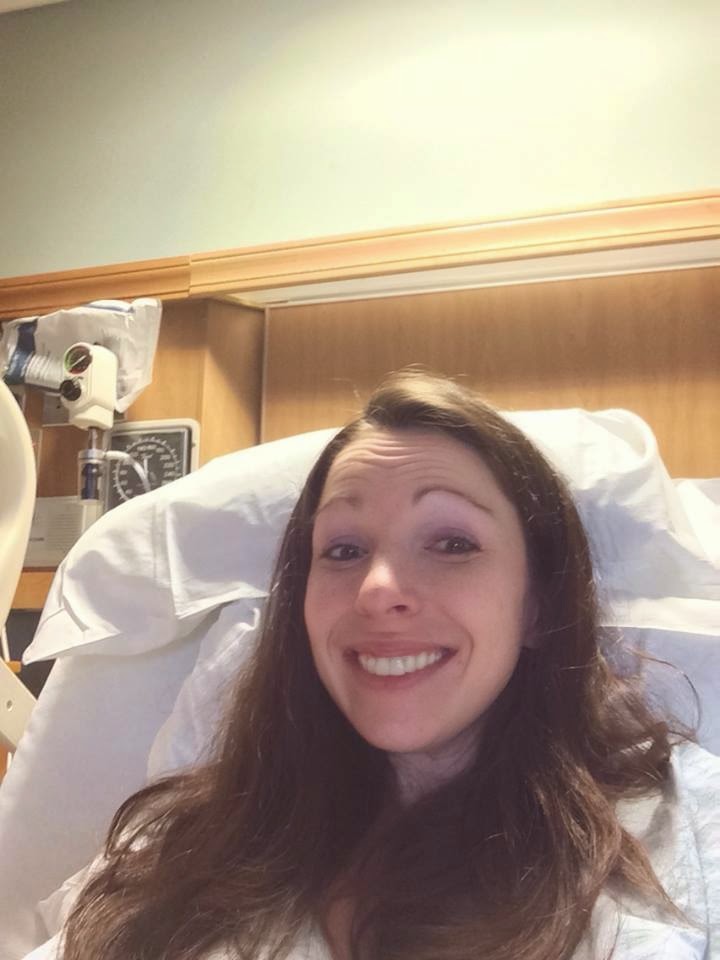 Anyway, we walked over to the delivery suites and got set up in the biggest and best room they had.  We texted our families that they needed to come because baby would be coming.  Then David went and got brunch to go.  How sweet is he?!  It was SOOOOO good...and ended up being lunch.  He also got me a petit four. 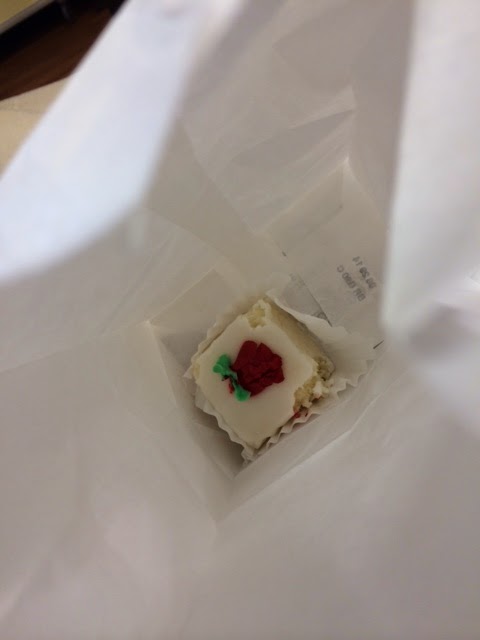 After we ate, he went home to get our bags, etc.  Of course, right as he is texting me that he's leaving the doc comes in to place my balloon.  I was worried that it would be something that I would want/NEED him to be there for.  Thankfully, it ended up being essentially pain and discomfort free...until right after, because that's when my contractions - which were apparently every five minutes since I had been admitted (though they weren't hurting I could feel the tightening) - became uncomfortable.  I could continue without much problem but they definitely hurt some. 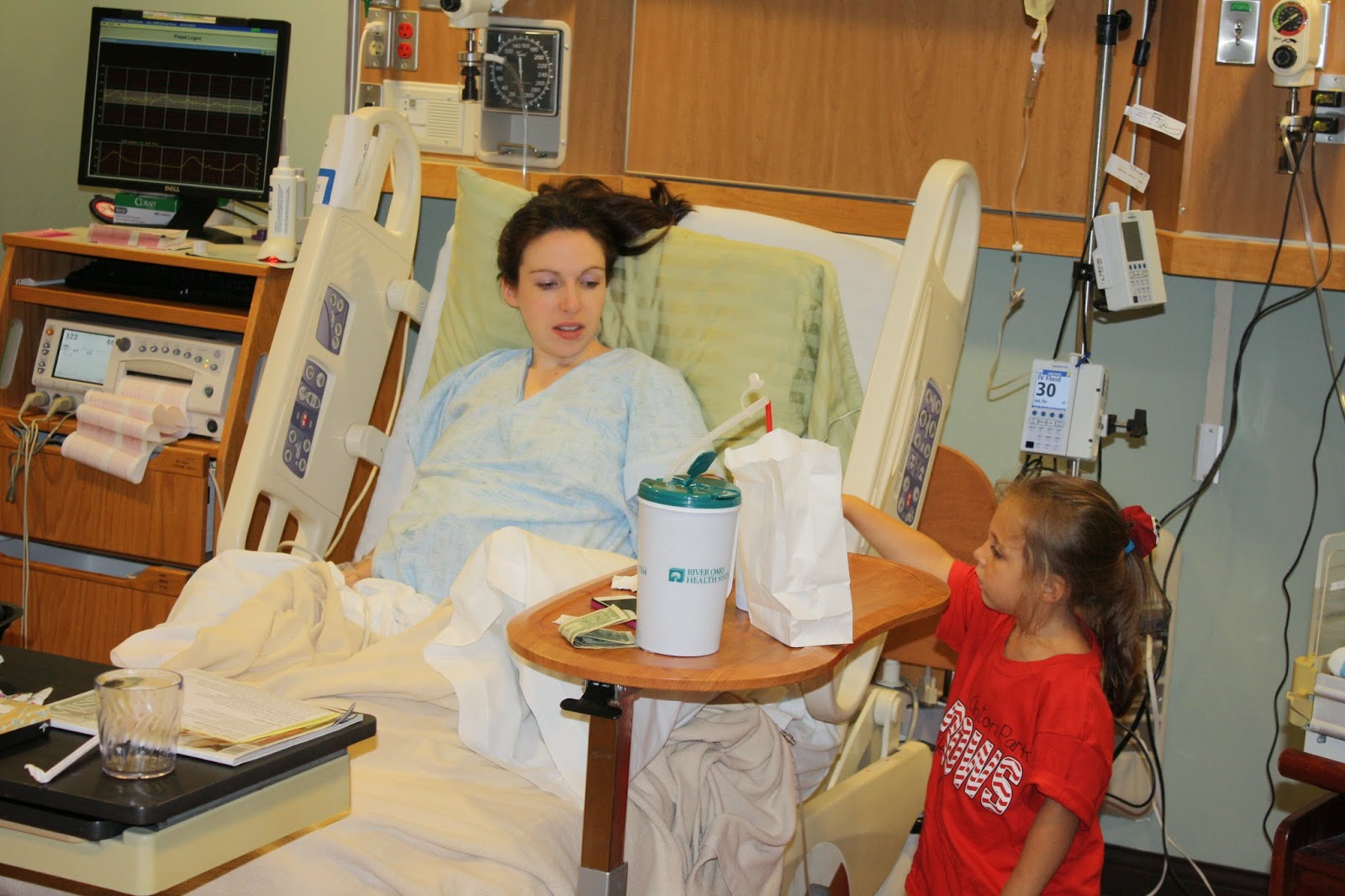 My parents came by and Daddy brought some chocolate covered English toffee caramels.  (Kate is sampling in the above picture.) Then they went to get Kate from afterschool and bring dinner back. 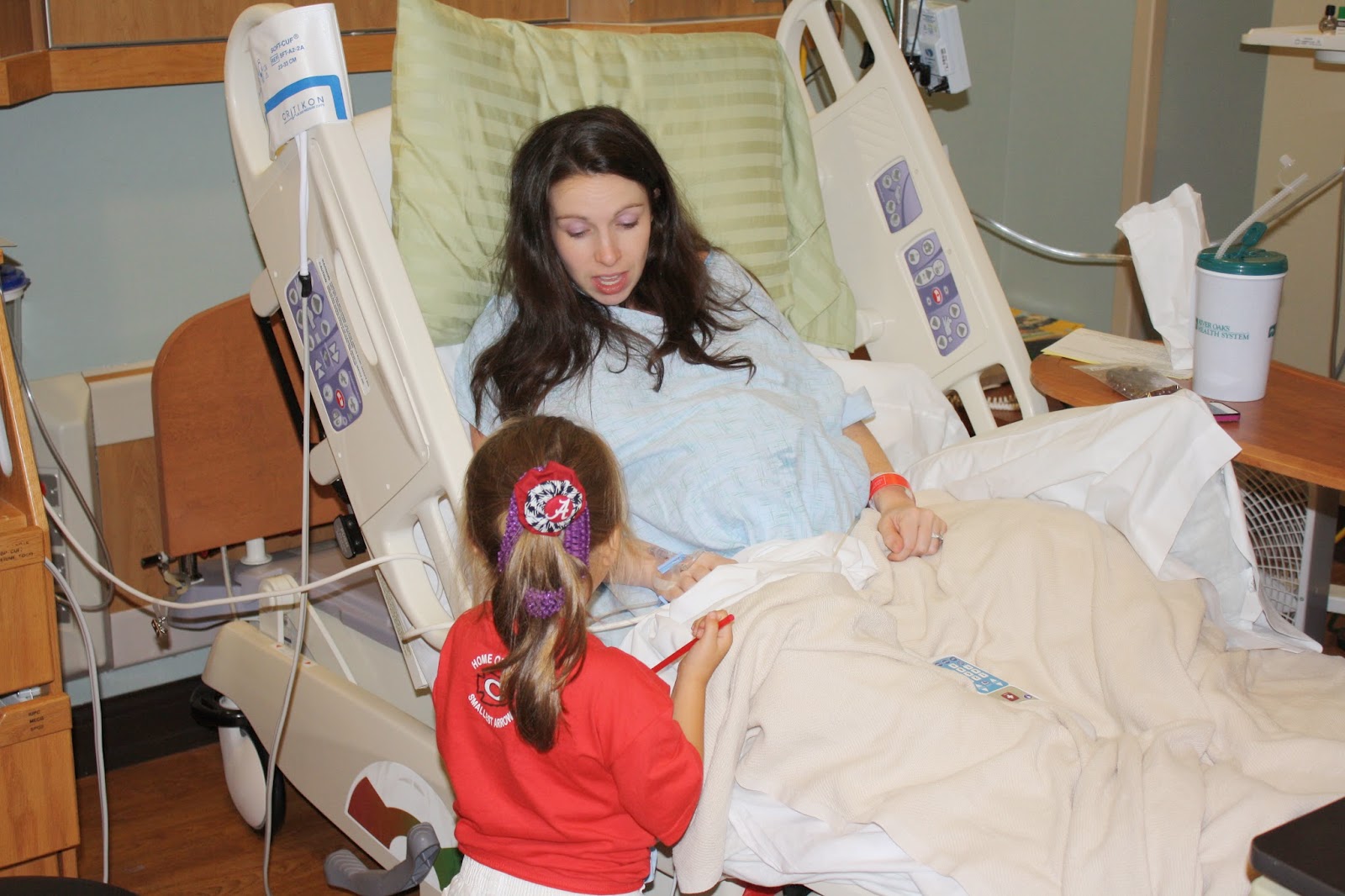 Kate was very intrigued by my IV.  She kept asking why I had it and what it was.  I will say, the worst part of the IV was actually HAVING it.  It only hurt a little bit when she put it in but every time I tried to get out of bed, etc. it pulled a bit.  At one point, it actually hurt some but was still flowing and was definitely not causing an infiltrate.  The next day, my nurse pulled it back a little bit and it started flowing better and didn't hurt.  We think it was up against a valve in the vein.  Anyway, while Kate and my parents were there, I honestly didn't feel any contractions - they were great distractions.  As soon as they left, I started feeling them again...and they only got more painful. 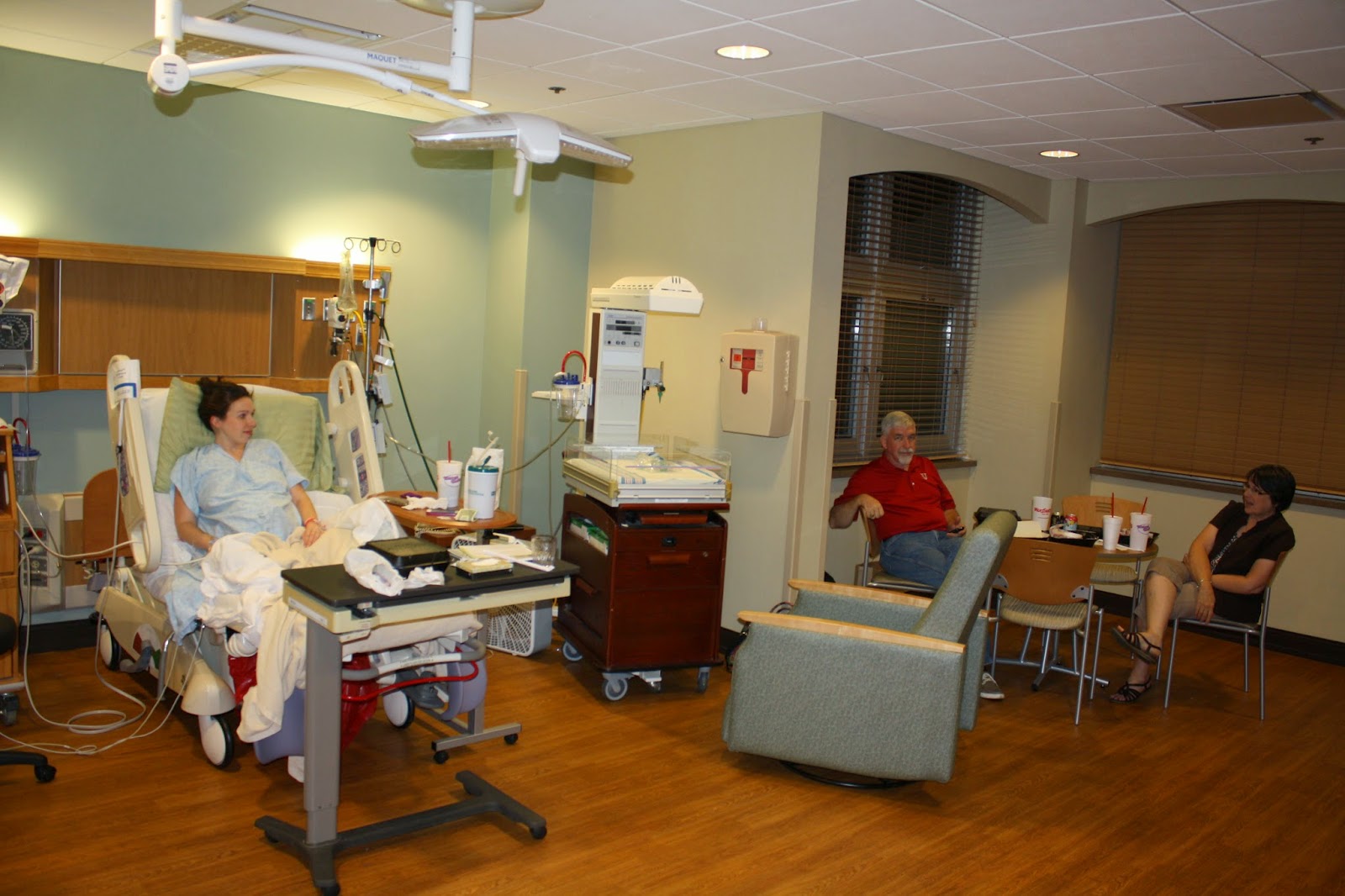 The nurse offered Stadol and Phenergan (as well as Vistaril to help me sleep).  She had actually been offering since around 4pm.  Can I say that 1. I should have taken it sooner (I waited through about 2 hours of painful contractions where I would fall asleep only to be awakened by the contraction every 3 minutes or so) than I did!  2. SO glad I didn't have it before Kate came.  I was afraid of how I would respond to the meds since the anesthesia from wisdom teeth had made me sick for 24 hours after.  As soon as she pushed the meds she said I'd feel effects quickly.  Um, yeah...about 2 seconds later my eyes got all dizzy and I couldn't keep them open.  She said to just give in and boy did I!  I slept for about 3-4 hours without waking up until a contraction woke me.  I asked for more meds and slept through until morning. 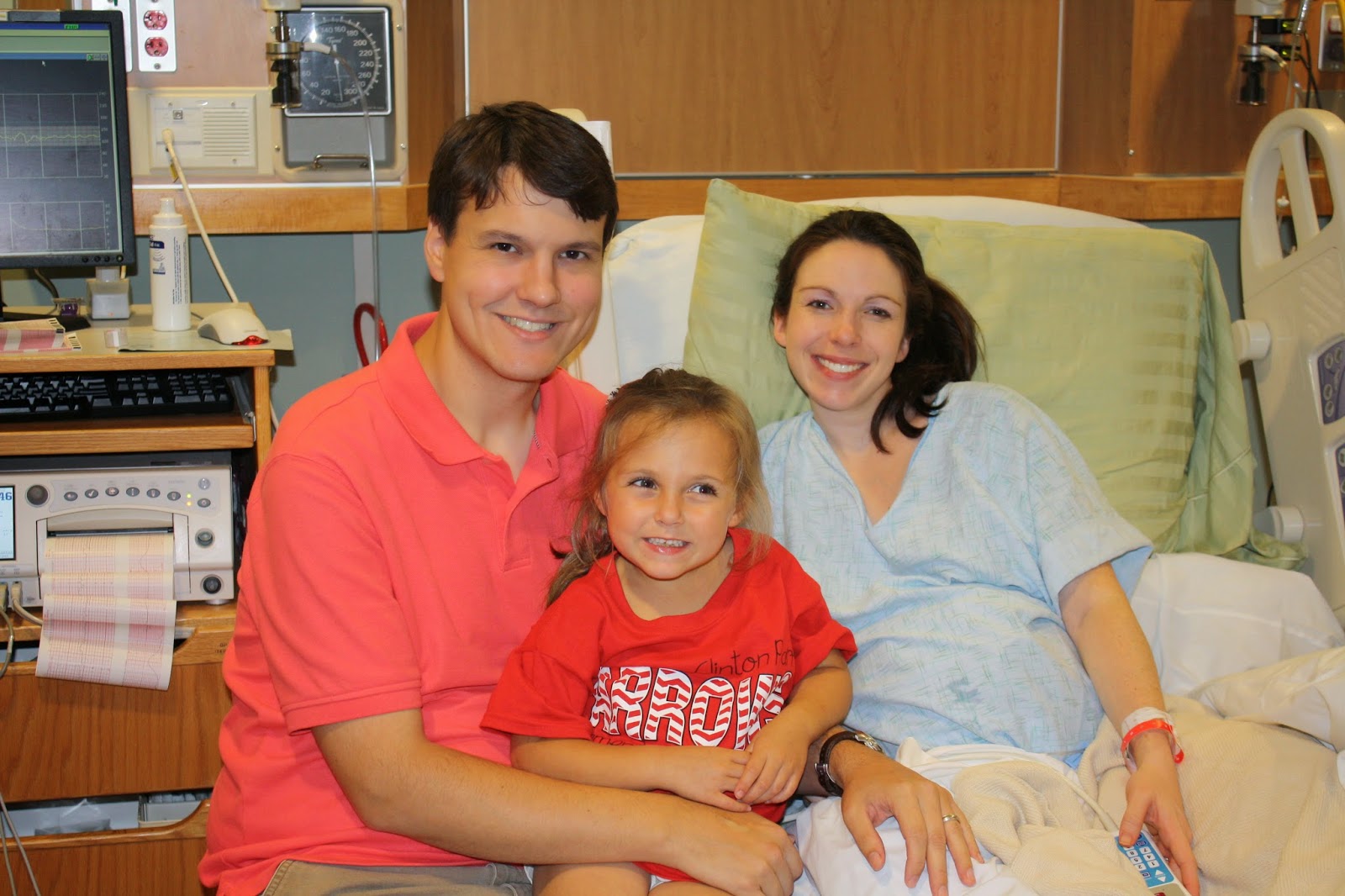