D made a dessert for a party a while back and took pictures...without me asking him to!  My comments below in blue!  Check it out!


Greetings all!  D here.  I’m giving Claire a little bit of a break today, and bringing you a simple recipe to boot.  This was one of C-prime’s favorite recipes to take to functions – even more-so than our sausage balls – as it comes together nicely and lends itself to using those crystal bowls that otherwise you never get to use.  That said, we never knew what to call it.  She called it Strawberry Stuff, and I guess that’s what it is.  Claire asked if it was a trifle, and I explained we didn’t have fancy words like that in Alabama. 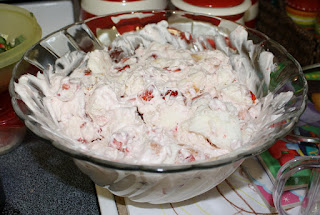 A few months ago, one of Claire and my friends was having a birthday, and her husband hosted a surprise birthday party.  I decided to take this along.  I was told it came out okay, but there were chocolate chip cookies at the party, so I wouldn’t know.  It was good...might use more strawberries next time.  I wouldn't know about the chocolate chip cookies!  :-) 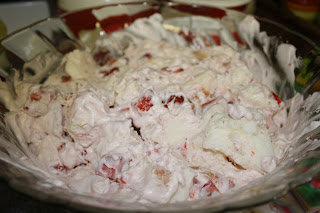 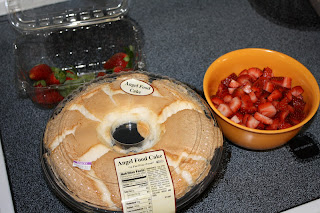 1.       Rinse your strawberries (I know all cookbooks say to wash fruit, but really, you’re just rinsing them.  I’ve yet to see anybody break out the Dawn to prepare fruit.  Ha! He makes me laugh!)  Cut the green caps off.  Slice the strawberries.  Here you’re going for nice, bite-sized pieces.  Anywhere from 4-8 per strawberry, probably.  Remember that strawberries have a rough radial symmetry about the long axis, so I would advise using this to your advantage to maintain uniform slicing. 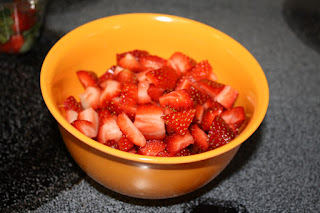 2.       Tear the angel food cake into bite-sized chunks.  Yes, this is as technically demanding as it sounds.

3.       Prepare the Dream Whip (or just get your Cool Whip out).
Mix the ingredients in a large bowl.  You won’t think you need a large bowl.  But you do.  Mix on low speed with an electric mixer until blended.  Then beat on high speed for 4 minutes until topping thickens and forms peaks.  Several concepts here were new to me.  I’m still not sure about the peaks thing:  if you’re mixing it, it’s going to be flat.  A little wrinkly, but still flat.  No peaks. Don't worry...education will occur!  When you pull the mixer out of the whip, it should pull up and leave "peaks" in the whip.  Leaving that aside, I always thought that mixing was a binary process.  Either something is mixed or it isn’t.  But I must confess, the texture really did change once I started beating it on high.  For that matter, the color of the surrounding countertop changed, too.  I’d never beaten anything on high before.  I guess it adds more air and reaches a lighter, fluffier texture. Exactly! First you mix...then you whip "into shape!" 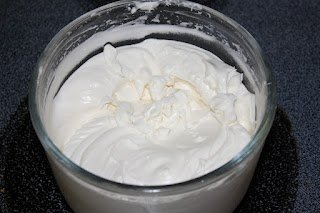 4.       (Optional) At this point, I had started mixing the ingredients together and felt something was missing.  C-prime always used frozen strawberries for this recipe, and I think that syrup, or nectar, or whatever, was what I was looking for.  So I used our Magic Bullet to blend the strawberries I hadn’t used into a syrup. 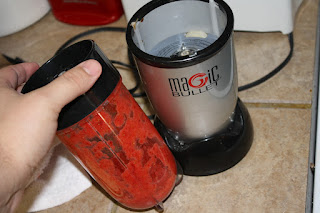 5.       (More Optional) I also seem to remember adding Splenda to this recipe.  I didn’t this time, and I was told it was plenty sweet.  Sweeten to taste.  That sounds good. 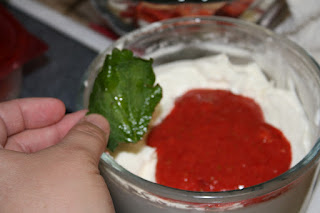 Isn’t this a huge strawberry leaf?! 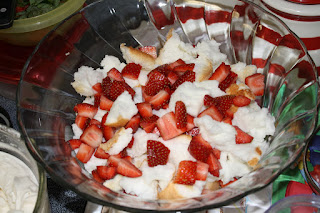 a.       One of the attractive things about this recipe was always the eye-popping color.  I’m not sure if it was not using the frozen strawberries, or mixing in the syrup with the Dream Whip, but it turned pink and didn’t pop as much as I remembered.  Alas. 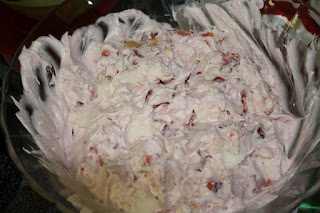 7.       Once a satisfactory degree of homogeneity is reached, cover with cling wrap (which is never serving quality, ironically - just remove before serving! :-)) and chill until served.  The longer it sets, the more the cake will soak up the Dream Whip.  This is not really a problem, though - makes it better...will soak up strawberry juice too...yum!  Just an observation.  Then...enjoy!
8

Ha, I loved reading this. Especially the scientific or mathematical approach to the directions, "rough symmetry about the long axis." :-) Aaaand, concerning washing fruits, Claire I don't know if y'all had to do this when you lived in K-stan, but here we literally wash the produce: rinse the dirt off, soak in Potassium Permanganate, then rinse again.
This recipe looks great btw!

Great recipe! Can you fill us in on who D and C Prime are??

I am cracking up at y'all! Zeb had a roommate in college who washed his apples with soap and water before eating. I never quite got this. I was sure his apples soaked up some of the soap! Good job D! Looks good!