One of his Favorites

A couple of weeks ago, I asked D what he thought we should have for dinner.  He mentioned spaghetti.  Now, as long as I can remember, I have not been a fan of spaghetti.  Whenever we had it when I was a little girl I was less than enthused when that was on the menu for dinner...but I ate it.  He also suggested fish.  So, I chose fish but made macaroni and cheese to go with it.  That's one of D's favorites!  I haven't really made mac and cheese except for the kind from the blue box. 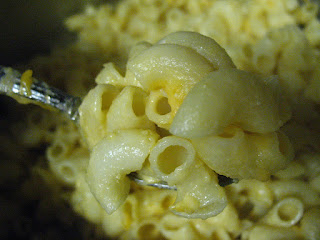 So, I went in search of easy MC recipes.  I found one here at Sunday Baker.  I didn't use her exact recipe but based mine on it.  It was quick, easy, and lightened from a normal MC recipe.  I took some whole wheat egg noodles but when I got to D's house, he had pulled out some elbow macaroni; so, I used that.  Not sure how much it was, but it seemed to be almost the whole bag. 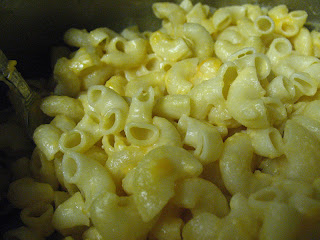 Since that time, I've used the same recipe with half a bag of whole wheat egg noodles.  This takes all off 10 minutes to make.  Just boil the noodles.  While they cook, you make a sort of beschemel sauce, add cheese, and then stir the drained noodles into the sauce.  I thought it turned out well.  D said it was really good...and gave him lots of leftovers!  :-)  Try it soon...goes great with fish. 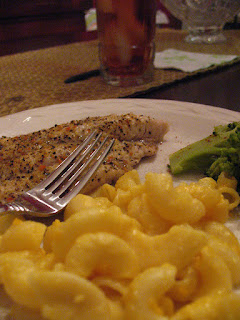 Boil water, put noodles in water and cook until done.  Meanwhile, put margarine and flour in a saute pan over medium heat.  Stir together until "paste" forms.  Then add milk and whisk together.  Cook until a thick sauce forms.  Add the cheese and stir until melted.  When noodles are done, drain and then stir into the cheese sauce.  Enjoy!
Posted by Unknown at 8:00 AM