Another Fish in the Sea

One of the things that I've found that D and I both really like for dinner is fish.  I'm liking that!  We typically use salmon, tilapia, or catfish.  I've tried to find trout but the stores here just don't have it.  So, a couple of months ago, I bought (unfortunately) frozen mahimahi.  One of my favorite dishes at Julep is the mahi mahi sandwich.  At work that day I searched for mahimahi recipes.  I guess most people just have the typical fish recipes because not many were very "special." However, I did find a recipe that looked interesting. 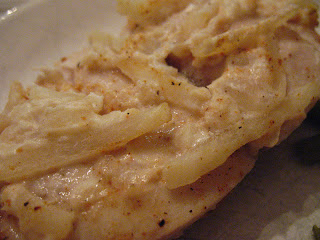 It was coated in hashbrown potatoes and prepared horseradish.  I didn't follow the recipe exactly but I think it was pretty close.  This was one of those recipes that tastes fine but didn't blow my socks off.  I think D and I had the same opinion of it.  To go with it, I pulled out some of the hashbrowns, formed them into patties and topped it with cheddar cheese then baked it in the oven alongside the fish. Next time I might would try the saute method the recipe called for...my problem was that I left the recipe at home!  Baking worked out really well, though.  D enjoyed that but K refused to try it.  Oh, well...one day she'll try! 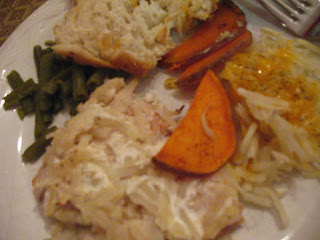 Preheat oven to 400.  Combine the potatoes, horseradish, and mustard.  Spread the mayo on the fish then top with the prepared potatoes.  Place the fish on baking sheets and place in preheated oven.  Bake for 13-15 minutes or until fish flakes.  *The recipe had this cooked in a skilled by sauteing.  You heat oil in a skillet over medium high heat. Place the fish in the pan potatoes down and cook until browned (4-5 minutes). Turn over gently and reduce to medium heat and cook until fish flakes.*  Enjoy!
Posted by Unknown at 7:43 PM

What a good idea to play on for fish. My son has been crazy for fish recently (and brussels sprouts and kale .. go figure!) so I'll have to try something like this soon. Thanks :)