PIG Roast and A Cupcake Adventure 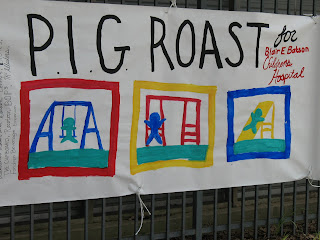 Wow! I didn't realize I was so far behind on posting! I've just been busy planning a fundraiser for the Pediatric Interest Group at my school. I am president and, unfortunately, had to pick up the slack that some officers left! Anyway, it was a fun day and at the end of the week (after a silent auction concludes) we'll have hopefully made some money that can be used for the Children's Hospital.
Anyway, I decided to do something fun to take for dessert. So, in addition to two batches of Sharpe cookies (recipe coming SOON!) I made Boston Cream Pie Cupcakes! I saw a picture of one on the Kraft website and decided that would be perfect. I have a recipe for the cake that a friend gave us when we lived in Kyrgyzstan. I think it turned out well. 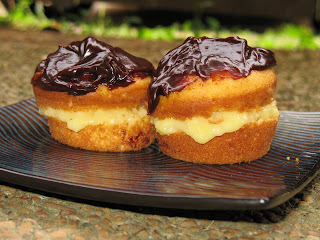 The first time I made the custard filling, it was REALLY clumpy. So, I decided to make it again. Fortunately, before I did so I realized that I needed to use a whisk to stir instead of a spatula. That worked SO much better. It still wasn't QUITE as smooth as I would have liked, but it was a lot better. Next time, I would make two batches of the custard to fill 24 cupcakes. I ran out of it this time and just had to do some normal cupcakes topped with the chocolate icing. I think if I used two recipes of the custard, I would be able to put more filling and fill all the cupcakes. 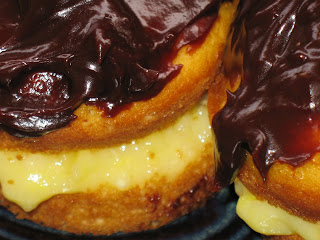 The icing is a dark chocolate icing made with cocoa, sugar, cornstarch, water, and a touch of butter and vanilla. It is the perfct smooth, thick but not cumpy icing. It really dressed up even the plain cupcakes. I think this is a good chocolate icing (or frosting, choose your poison) for just a normal cake if you're looking for something dark tasting rather than sugary sweet. 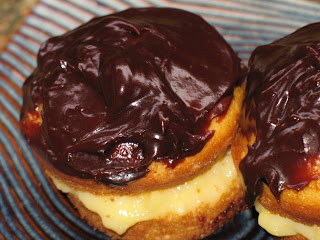 1 yellow cake mix, prepared as directed (I used butter as that’s what I had)

In a saucepan, heat milk until it is very hot. Add the sugar, salt, and flour while whisking. Cook until thick. Add the egg yolks and stir, while cooking, for 4-5 minutes. Remove from heat and add vanilla. Cool in refrigerator until ready to use. (This gets pretty thick, so if you need to add a little liquid before spreading, feel free…but only a tad!)

In a saucepan stir together cocoa, sugar, and corn starch. Over medium heat, add boiling/hot water. Stir constantly until mixture thickens. It will reach its thickest when it starts to boil. Remove from head and add butter and vanilla. Cool slightly and spread over cupcakes or cake. 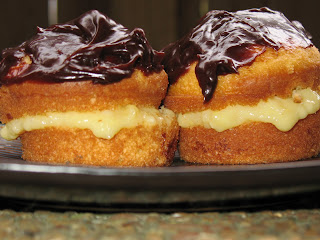 If you're interested in more fun cakes to make, check out the newest venture by the Daring Bakers. I won't link all of them, but you can find all the links, as well as her recipe, at Peabody's site. Sucha fun group!
Posted by Unknown at 1:32 PM

Oh Claire...Boston Creme Pie is one of my top desserts. In cupcake form?! I am going to remember that one!

What I would give for just a nibble of that cupcake!

Those cupcakes look awesome! I can't wait to make those Claire. Very yummy!

YUM!!! They look fabbo and will be making an appearance in our house very soon!

Thanks for mentioning the Daring Bakers! Your cupcakes look absolutely amazing...

Erika - SO much fun! Try it some time. I bet the kids would like it.

Kristen - So fun! Thanks. They make a kid dessert a little more adult-like to me.

Hester - Sure! Y'all all had great looking cakes. I think it'd be fun to do something like that! Thanks...they were fun to do.

These look YUMMY! Don loves Boston Creme Pie but I bet this would work better for us, will have to try it sometime.

gosh, these look so darling and delicious! i love boston creme pie, and with these 'bite-sized' (portion control is key!!) ones, there's no excuse not to make them. :)

Gail - They were fun to do. I love making cupcakes but don't do it often.

VC - Just make them normal sized cupcakes, then you won't (well, maybe) be tempted to each multiple ones like I would be if they were truly bite-sized. "Pop and chew" treats can be dangerous! :-) I think part of the satisfaction comes from being able to enjoy it over time.