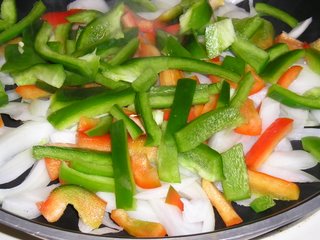 Last week I was in the mood for Mexican. So I decided that I would make chicken fajitas. I've recently discovered that I enjoy the flavor of red peppers. However, to buy those at the grocery store costs a crazy amount...$1.39 PER PEPPER. So, I was excited this week when the farmer's market actually had ONE red pepper. I snatched it and a green and orange pepper up quickly! Our farmer's market fare is dwindling here, so I figure I better enjoy it while I can. Anyway, Sunday (less than 24 hours after purchasing the pepper) I walked through the kitchen and smelled a strong pepper smell. I looked in the bag and there was a pool of liquid along with a deflated red pepper. It was as if the pepper was a 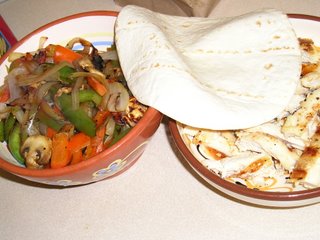 water balloon and had been burst. So, after all that excitement, I lost my red pepper.

But, I still had my orange and green peppers. So, I pulled out a couple of chicken breasts from the freezer, seasoned them, and threw them on the trusty George Foreman Grill. I wasn't really sure how the chicken would turn out, but it worked. After cooking the onions, peppers, and mushrooms I put together some yummy chicken fajitas! I added a little rice, some salsa (home-made mide you!), and yogurt. I used the yogurt for sour cream. To me it tastes very similar and has more bacterial benefits. These fajitas...quick, easy, and healthy...faster than Rachel Ray! 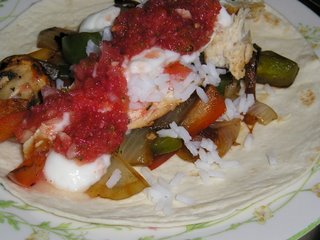 Season the chicken and place on a grill. Cook until cooked through. While chicken cooks, chop the 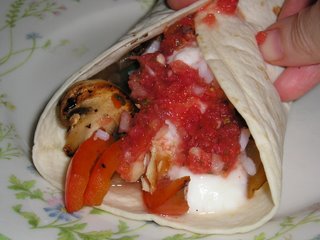 onion and peppers. Place the onions, peppers, and mushrooms in a hot saute pan and cook until the onions are translucent and peppers are tender. Layer vegetables, chicken, rice, yogurt, and salsa on a tortilla and enjoy!

ALTERNATIVE: I did this the next night. Take some salad greens, place heated vegetables and chicken on top. Top with yogurt and salsa. Enjoy this as a chicken fajita SALAD since apparently we're supposed to eat a salad a day!

This can easily be made vegetarian by eliminating the chicken and increasing the vegetable amounts! Still YUMMY!
Posted by Unknown at 6:58 PM

I love fajitas - but have never made them at home... It's about high time! Love the pics :)

I'm not feeling the yogurt but otherwise, your fajitas look great. This is basically how I make quesadillas except I chop the grilled chicken and veggies up, mix in a little cheese and sometimes salsa, then I fill the tortillas and grill them (with a bit of cooking spray on them).

VC - They were so easy! Glad you like the pics. For some reason a few of my pictures have been turning out nicely.

Paula - I guess the yogurt thing is just a taste thing. I didn't have sour cream and use yogurt more often, so I just got that. I slice the chicken in to thin slices but I think I forgot to put that in the post. The quesadillas sound great!

Love fajitas! My cousin made some awesome ones for me last time I was over.

I'd totally do the yogurt thing, great idea.

Sounds good - I love Mexican food. I am so sad about the farmers markets winding down too.

Crystal - Glad you like the yogurt idea! It makes me a little more able to enjoy that flavor knowing it's good for me!

Sara - I guess I'll have to turn to frozen veggies coming up soon. Boo! I'm going to miss the market!

Yum, that looks good Claire! We eat out Mexican a lot, and love fajitas, but I have never tried them at home.

Hate to hear that the Farmer's Market is dwindling down... I still haven't made it out there. Post and let us know if you get back and find some "fall bounty"! :)

Mmmm. I love fajitas. We have a local place that makes to-die-for pork fajitas. They are the only ones I know of who add the mushrooms. Fajitas have to have mushrooms in my world.

Stacy - I'll let you know if I find anything good tomorrow. Hopefully I will...I need some veggies!

My son orders fajitas every time we eat mexican.....to him there is no other.

I love them too, and yes, with the yogurt!

I always though fajitas were hard to make for some reason. You just took the mystery out of making them for me~!! I could totally make them. Thanks for the step by step instructions!

Kate - Go for it with the yogurt! You should try it at home, that might get your son to eat there more often! :-)

Annie - They are really very simple. Glad that I could help! Hope you try some time.