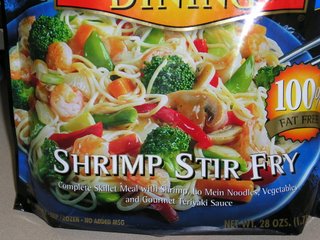 Last Friday a couple of friends came over for dinner and a movie. We watched Lucky Seven. If you haven't seen this movie, it is a must, especially if you're a fan of Patrick Dempsey! It also has Kimberly Williams Paisley (from Father of the Bride). VERY cute Family Channel movie. I found it at Movie Gallery. It's one of those movies I could watch over and over and never get tired of it. WARNING: this is a girly movie!

Anyway, I decided that I wanted to use a frozen meal that I bought last year some time, so I could free up some freezer space. It was one of those everything included type meals - shrimp, sauce, veggie, and noodles. WELL, there were not many shrimp and I don't think I saw a single mushroom (they were supposedly in there!). Overall the taste wasn't bad, but I think if I did get the dinner again, I would want to add more shrimp and veggies...so what is the point in getting it again? Maybe to have something quickly available for those busy, busy nights. My rating out of 5: 3, just average! Don't worry, we did have a good dessert that I will share later.
Frozen Meal :-)
Frozen Meal 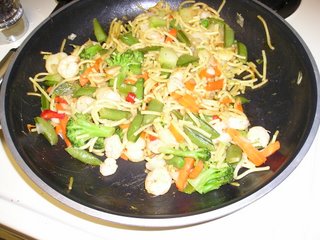 Open bag. Heat pan. Follow instructions on the bad being sure to take the ingredients out of the smaller bags! (I had a friend who was cooking frozen broccoli and read the instruction to put broccoli in boiling water. She put it in the water and then wondered how she was supposed to read the rest on the instructions when they were in the water! WOW!)
Posted by Unknown at 2:25 PM

I hear you on the frozen meals... Why is it that the pictures on the packaging always look so appetizing and display so many jumbo shrimp & goodies, when the contents contain (I'm counting very hard...) 2 mini shrimps?!

I have 2 frozen dinners in my freezer. I keep them just "for emergencies". As if you need a frozen dinner for an emergency (I would probably rather just eat cold cereal.) But I feel better somehow knowing they're in there... Oh well, I bet the dessert was good! Now I'm curious!

hey Claire - here's a response for you from my blog:
they taste similar to red raspberries, but slightly different. I personally think the pink ones taste like strawberries. They also seem more tender.

Fun for having friends over! I need to do that more often. It's kinda hard when you have your best friend with you at all times!

VC- I guess you could say marketing is good...they get us to buy the meals!

Annie - I think it's good to have them for emergencies or when you don't feel like doing anything else. It didn't taste bad, just wasn't what I expected.

Crystal - Thanks for the info! Sounds great! I wish I could get those here; I think I'd like the pink ones! Yes, LOVE friends! :-) Maybe one day I'll have my best friend with me all the time, too!

Sometimes when you are busy though, these kinds of meals are a necessity!
A little bit of a change for your blog?

OK, that actually doesn't look half bad to me! I don't do this kind of thing often either, but it's always nice to have in a pinch.

On the movie, I want to add that one to my list. My question is, where is a Movie Gallery around here? We have Blockbuster & Hollywood, but no MG! :)