This past month FLEW by!  I cannot believe that I'm already doing another month post.  This past Monday, Caleb turned 7 months old.  And let me just say that it has been a busy, tough and eventful month.  At his six month visit, Caleb was diagnosed with an ear infection.  We did antibiotics for 10 days and he did great with them once we discovered the bottle dispenser.  His eyes cleared up but he never fully got over his cough...but it was getting better.  Then, a week before he turned 7 months he woke up with a gunky and pink eye! (Look closely and you can see it here). 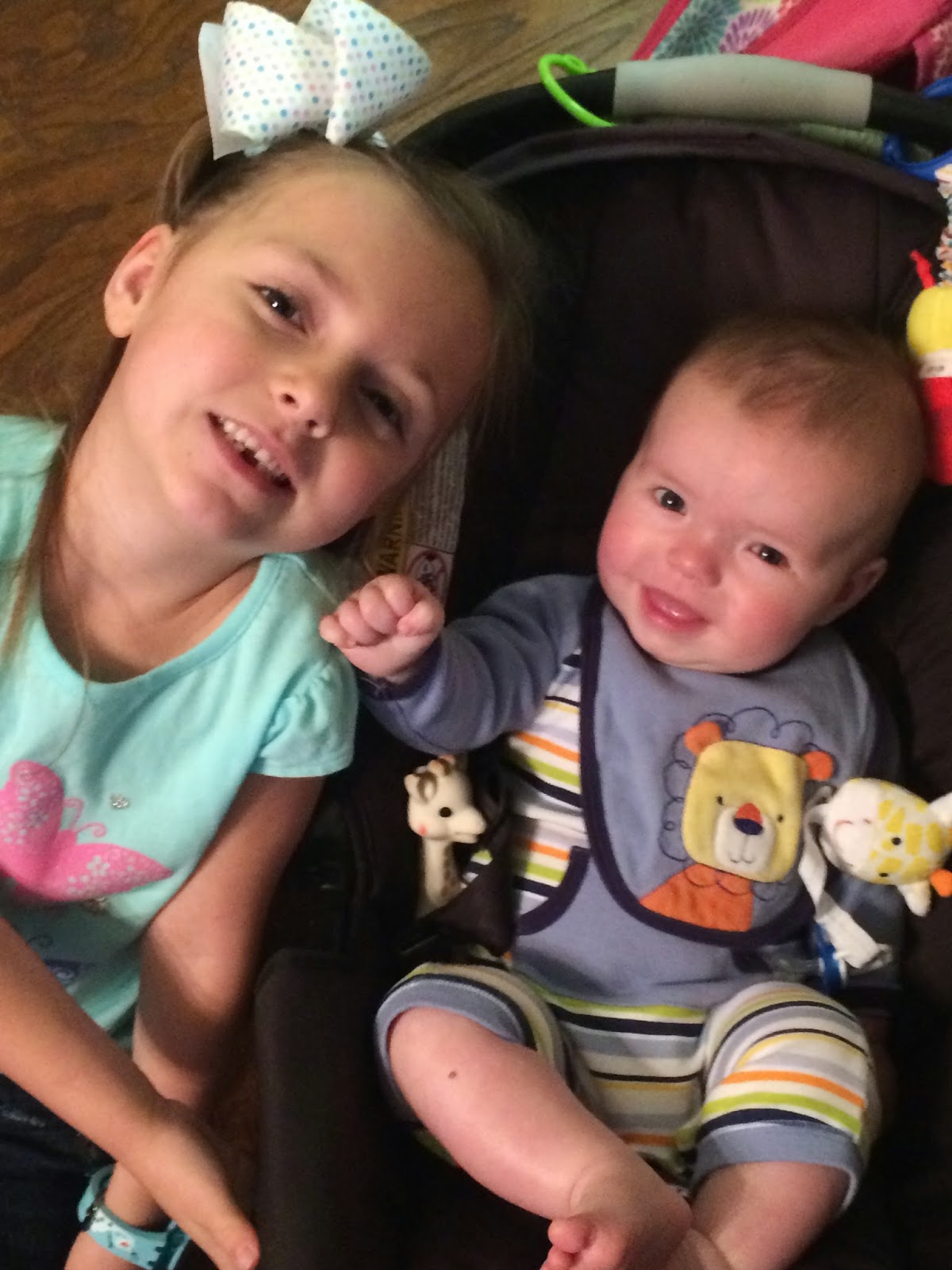 Poor, poor baby.  We started him on eye drops and he was a happy baby.  The next day, I went to put drops in his eye at school and he was so happy to see me...but when I went back two hours later to pick him up, he was crying in his sleep and so fussy.  Poor baby had his first official fever - 102!  He never had another fever but got to go with me to work the next day.  The day after that he started gnawing like crazy on teething rings as well as tri-podding like an expert! 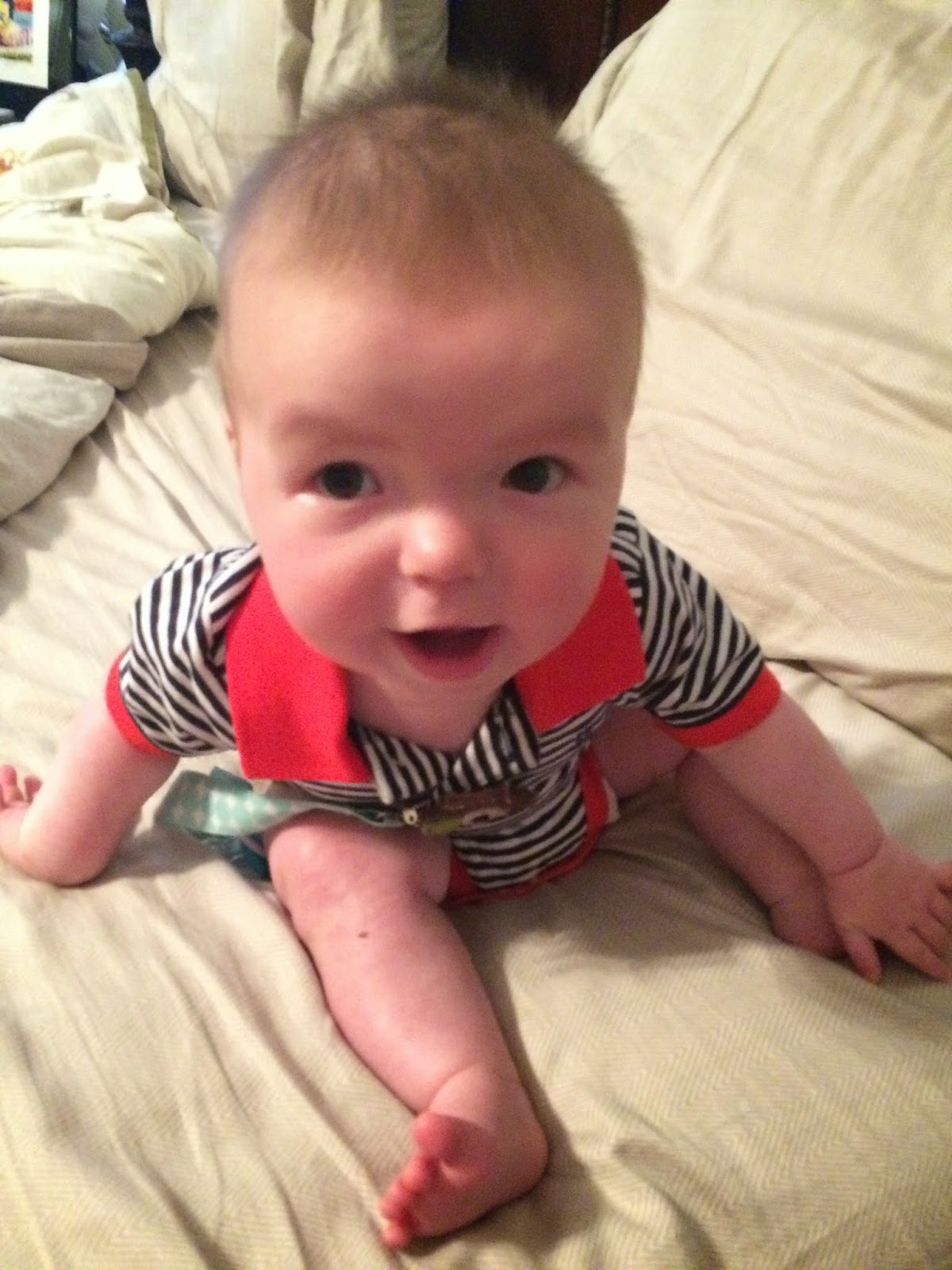 By the weekend, he was sitting pretty well and had a little tooth trying to poke through.  What an eventful week leading up to 7 months!(tooth on his bottom right gum) 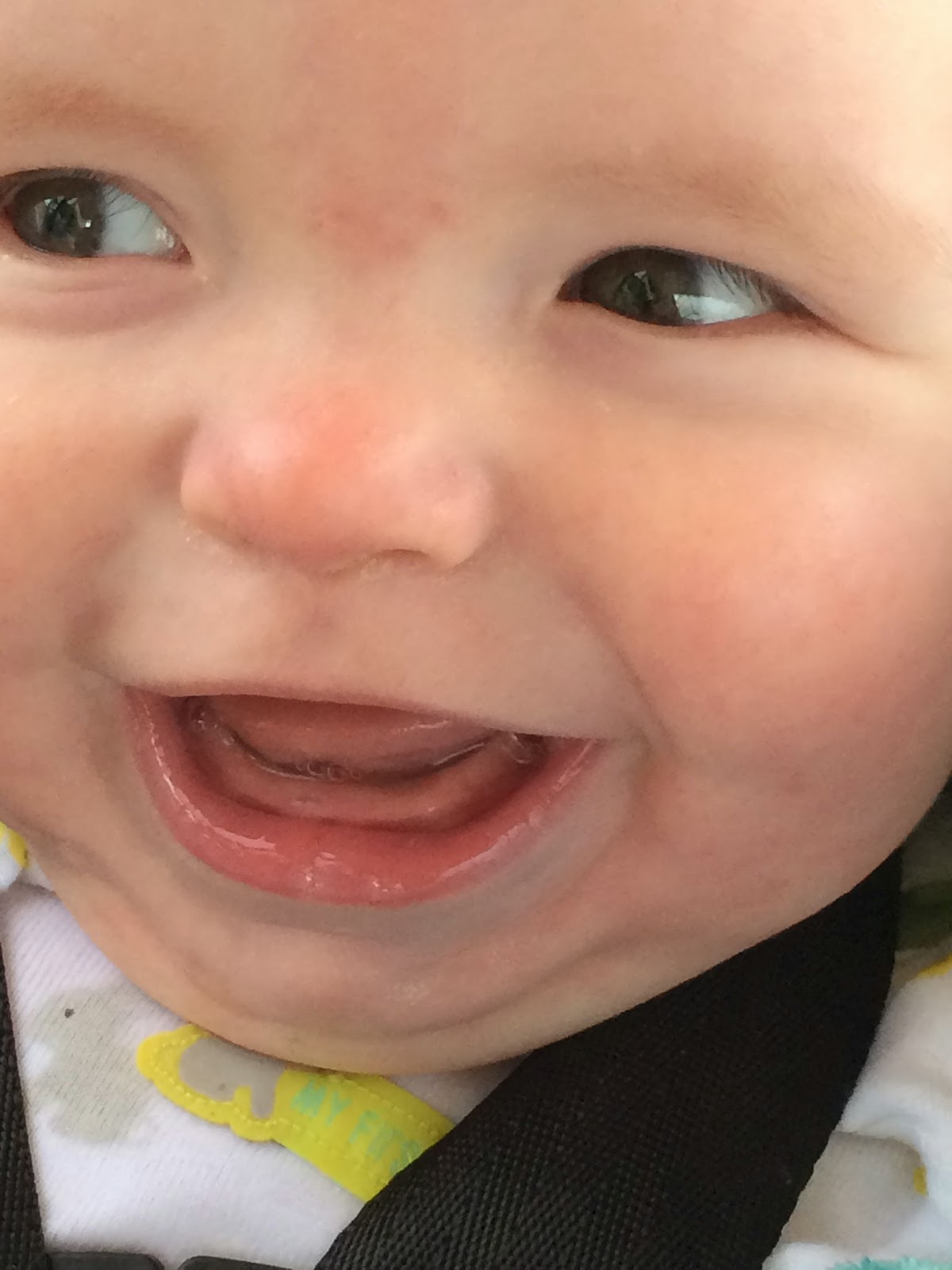 Food - he is still not a big fan of solids.  He pretty much immediately spits them out!...though he does like gnawing on his spoon! 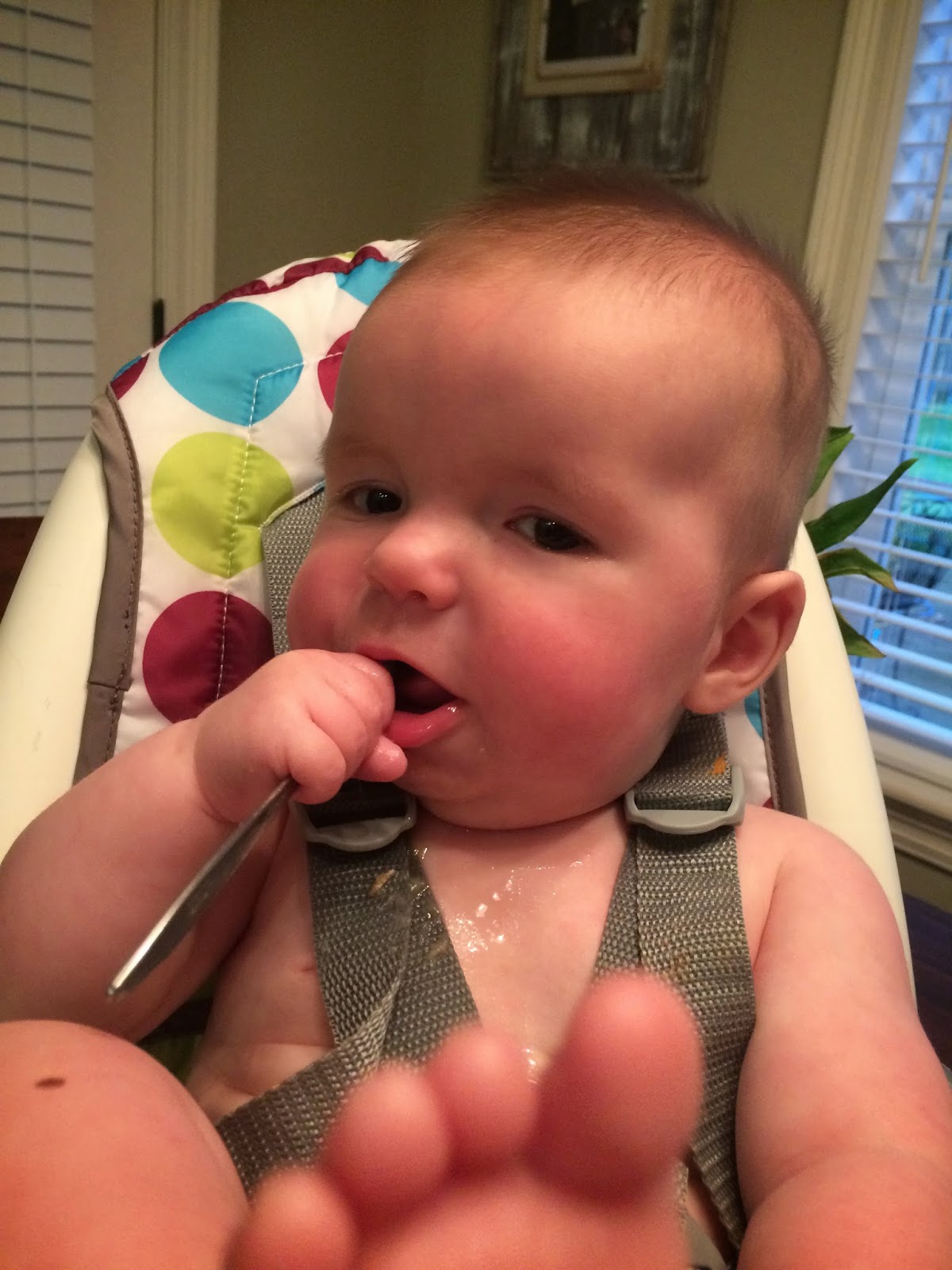 He likes the taste of bananas and mango for sure.  I think he likes strawberries, sweet potato and yogurt but won't eat them.  He doesn't like applesauce or avacado - yet! 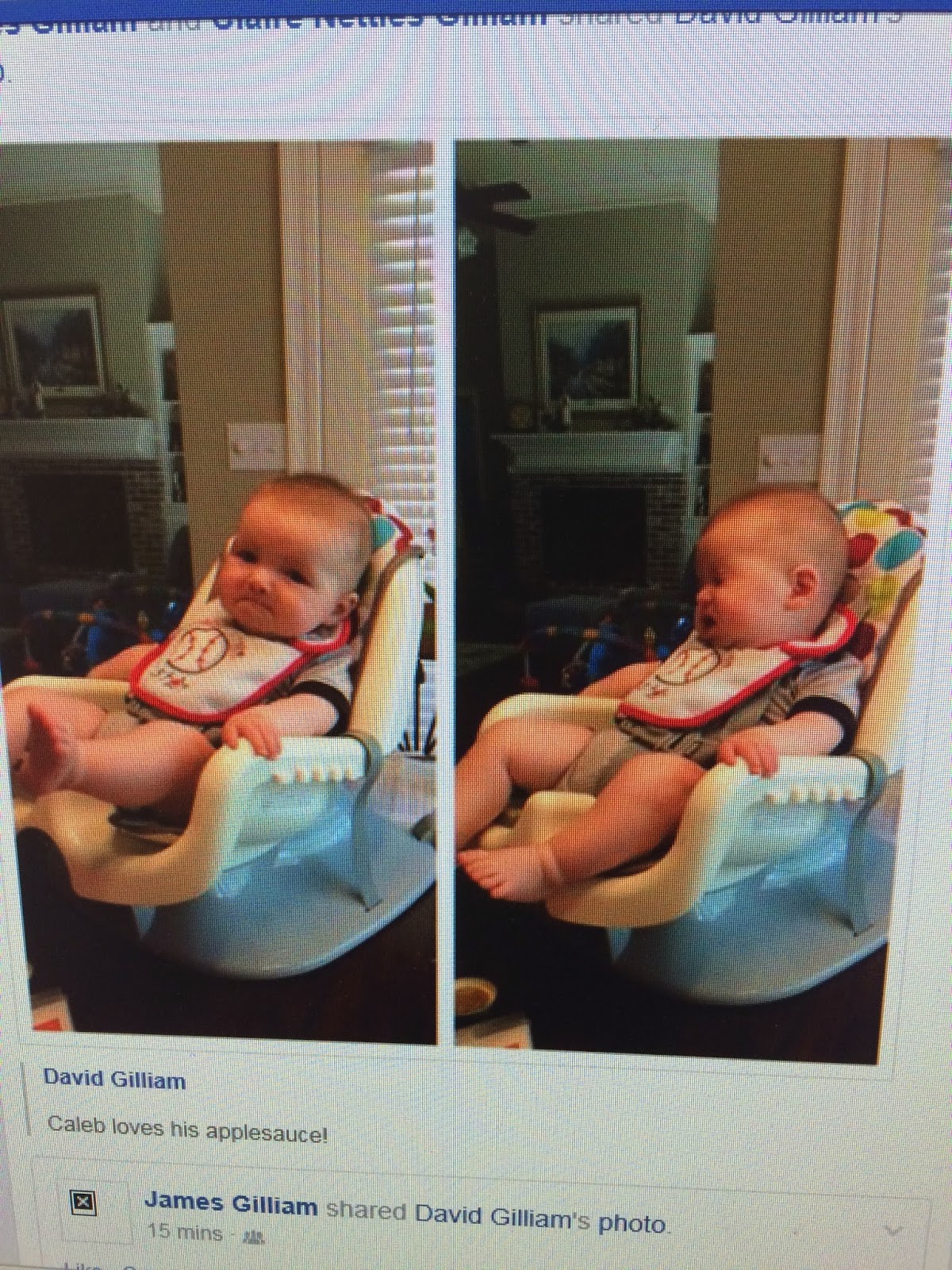 That said, he only eats breastmilk still.  He eats 6-7 times a day and is still eating (at least) once overnight.  And they have apparently taught him to hold his bottle!  Big Boy! 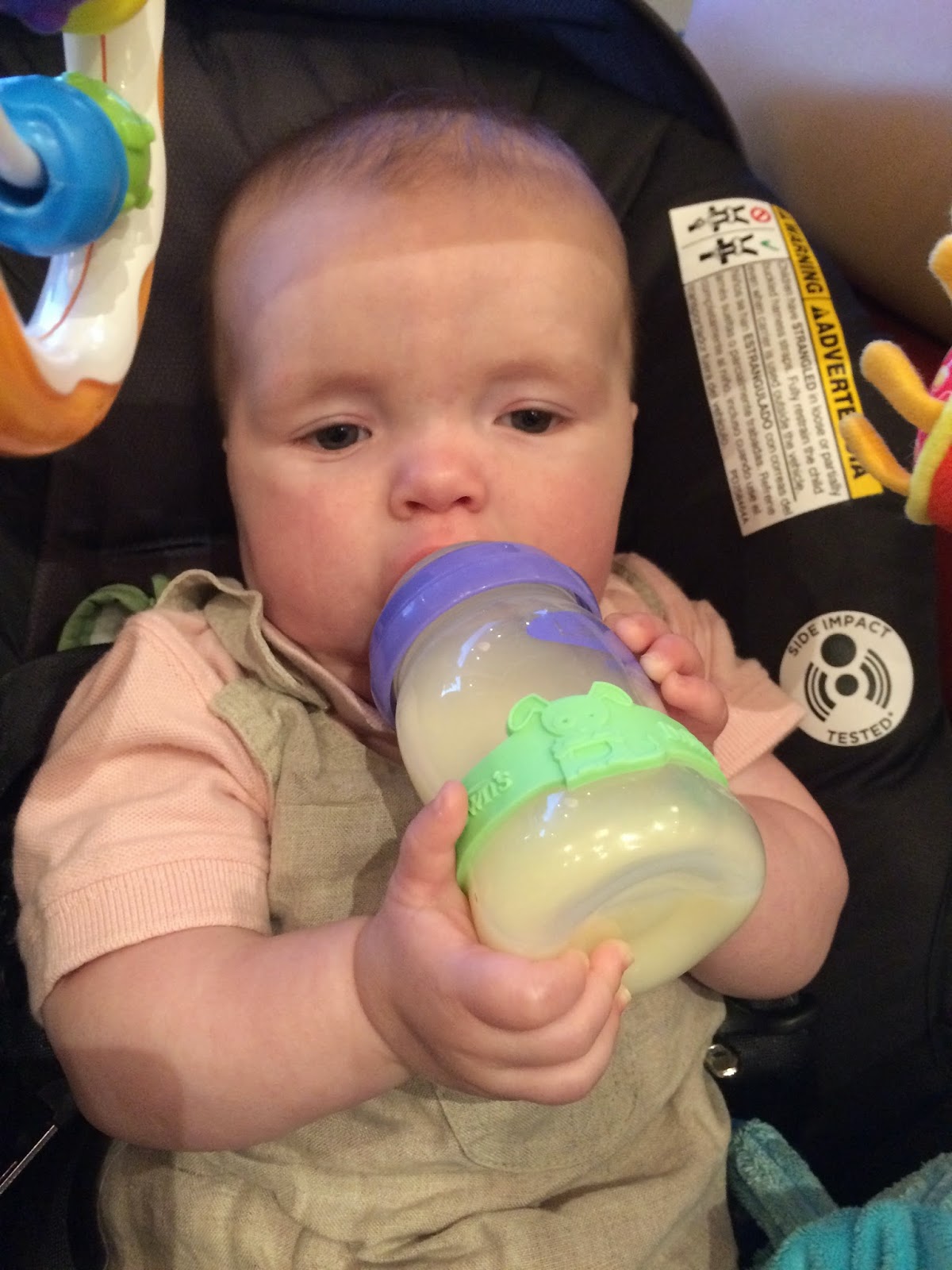 Sleep - Well, lets just say that this has been a very tiring month!  He used to sleep well, only waking up once a night, then we moved him to his own room and he got a cold.  Since that time, he's been waking up at least twice.  We tried waking him up right before we went to bed to feed him in hopes that would hold him off...not so much! 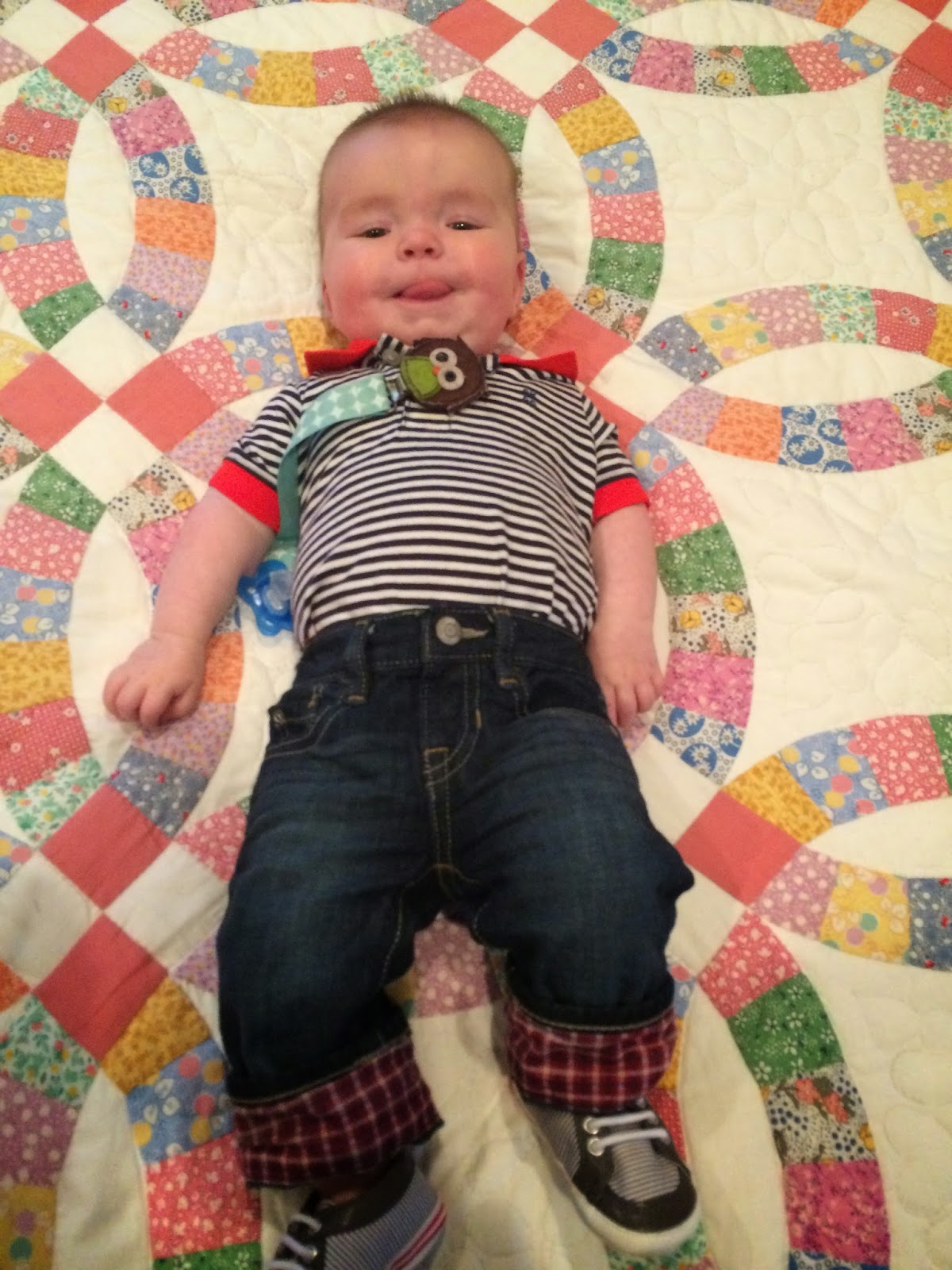 We tried not feeding him when he woke up...he just woke up again an hour later AND much earlier.  He was waking up around 445-5 if we did this.  Not working!  The past week he has been going to sleep after eating around 730-8....and only waking up once around 1-2.  Well, except last night when he woke up 3-4 times.  Hoping that's due to the tooth coming in.

Clothes - the 6 month clothes are getting small.  It just makes me sad.  The 9 month footies are definitely the better fit. 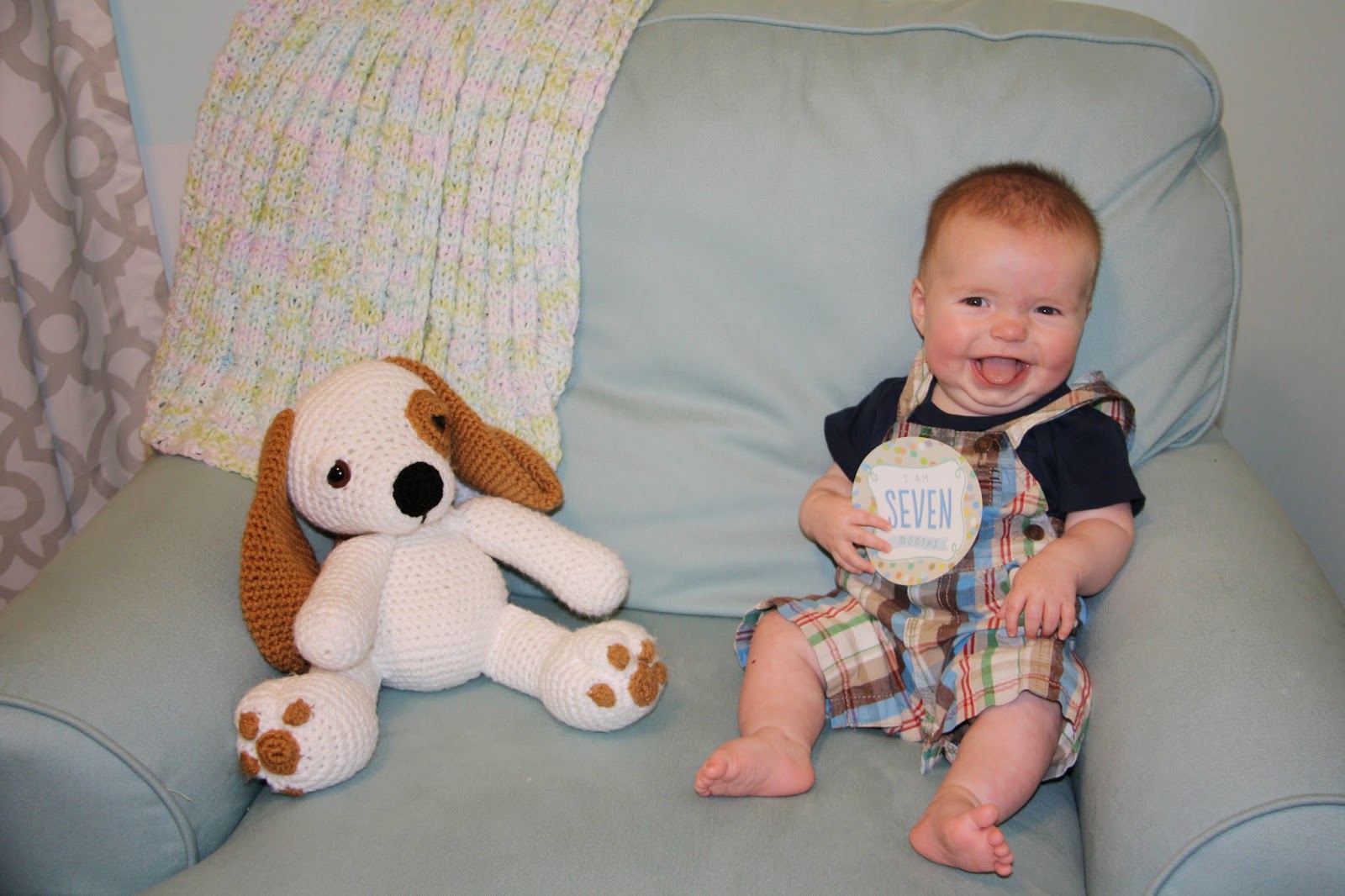 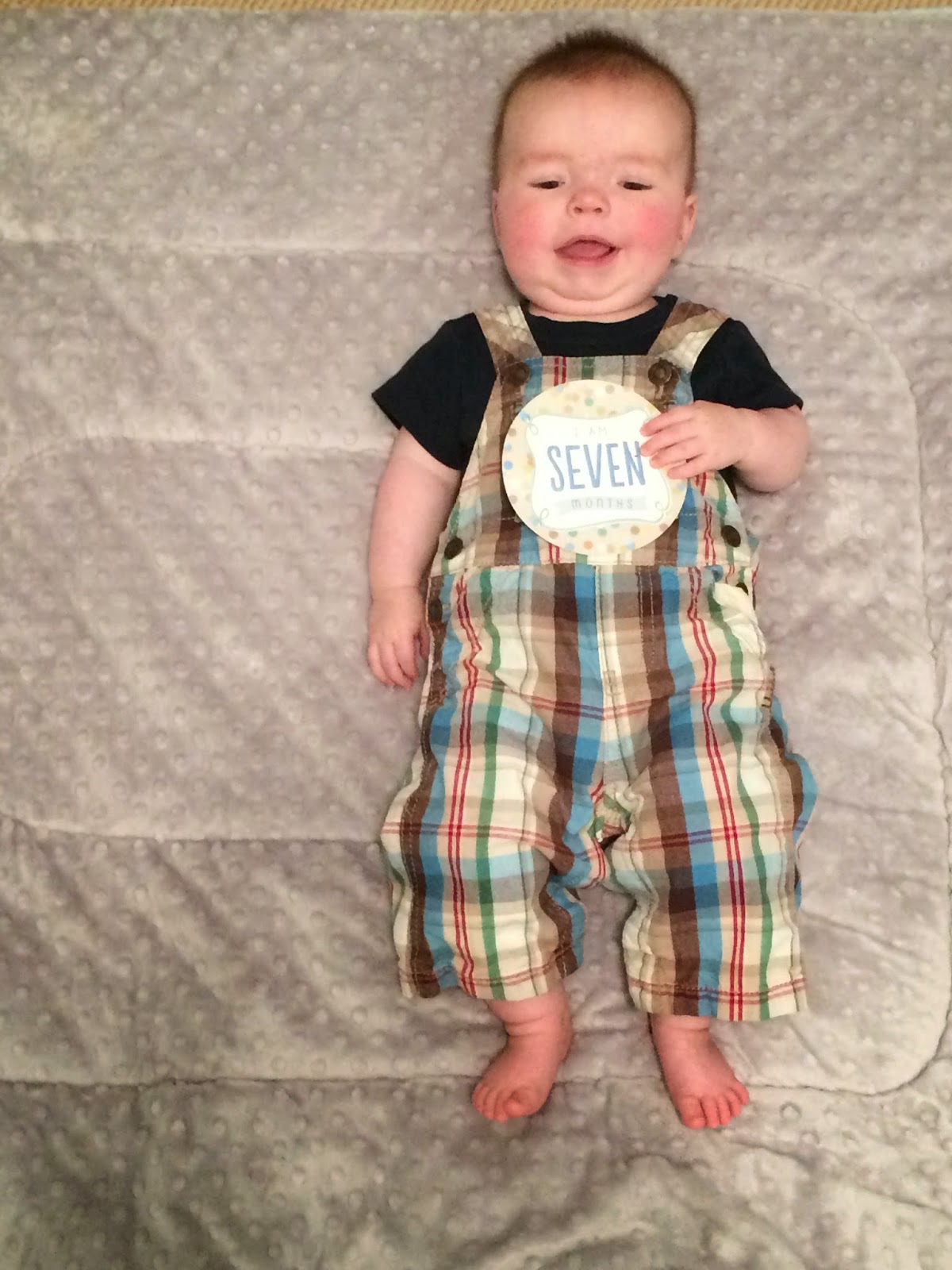 Personality - Caleb is SUCH a happy baby.  All the teachers at school come in to see him smile.  We had his 6 month pictures last weekend and the photographer made the comment that it was going to be hard to get a picture of him NOT smiling.  :-) 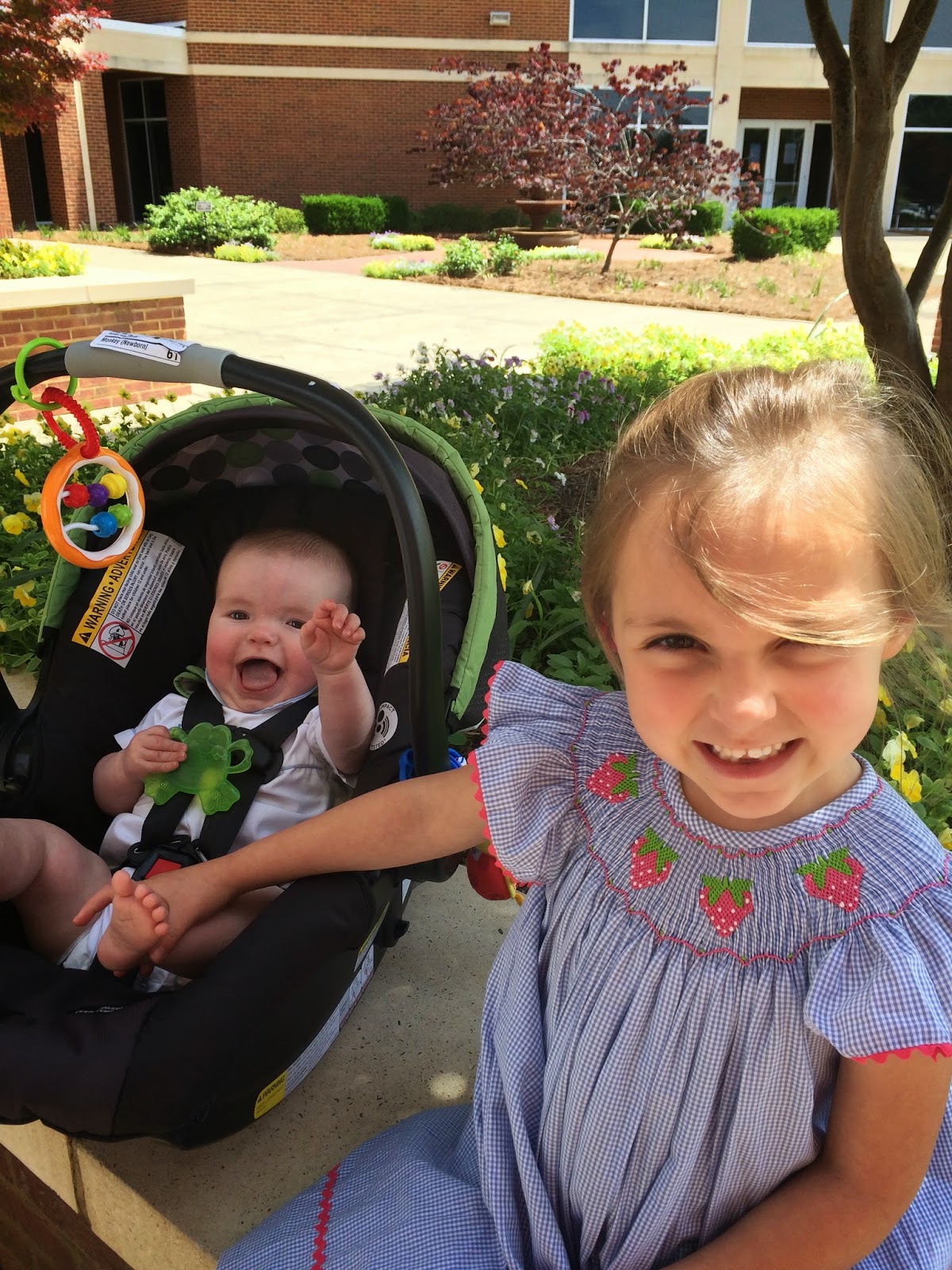 So thankful and blessed!  He has started to say "da da da" a lot.  In fact, he tells me his favorite person is "da da!"  He has really started to enjoy mirrors.  When you put him in front of the mirror, he immediately grins, squeals and reaches out for his image.  He loves his sissie and laughs and smiles for her.  He has also started this really cute "fussing" when he's tired.

Firsts:  At the beginning of the month, we took Caleb swimming for the first time.  He didn't squeal a lot, but he definitely seemed to enjoy it! He fussed when we got out.  It was also his first Easter.  We went to several egg hunts, though I'm not sure Caleb really knew what was going on. 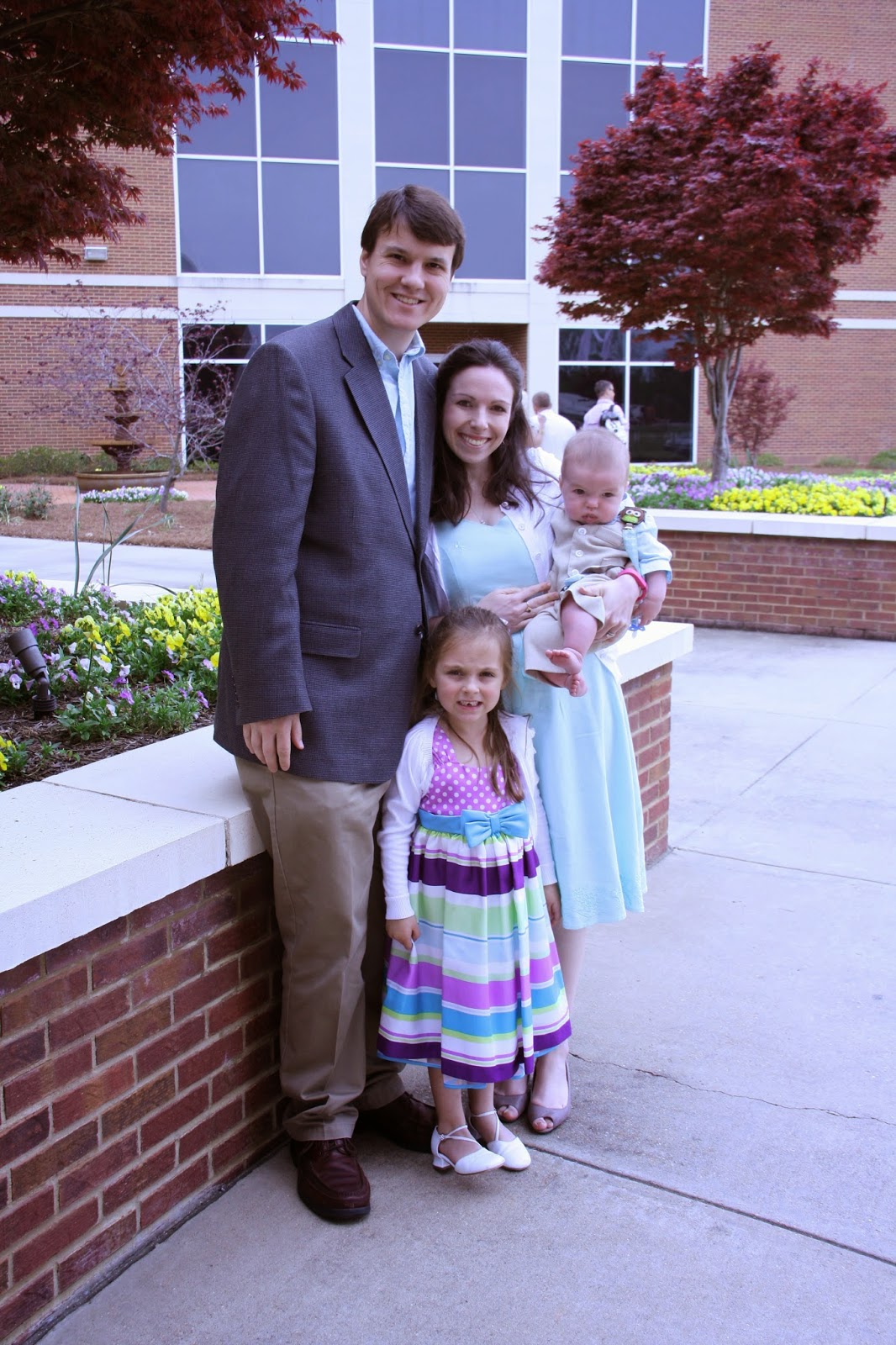 He started sitting up some, though he's not very stable yet. 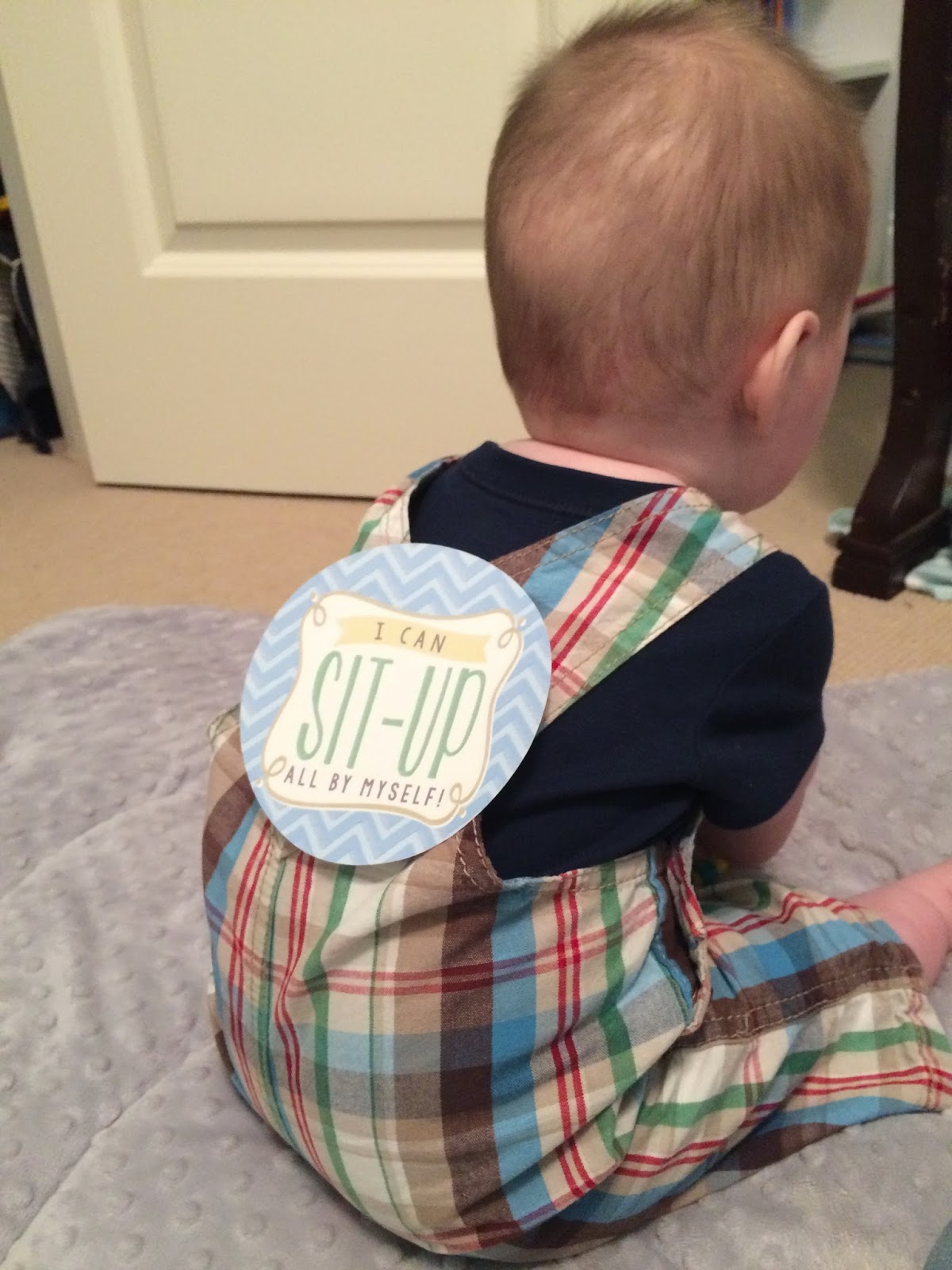 Funny thing....he absolutely ADORES Kate's cheer bear.  One night, he was fussy and I was trying to get her to bed before feeding him, so we went to her room to wait for her to finish doing teeth.  I grabbed Cheer Bear and put her in front of him; he immediately lit up, squealed and reached out for her.  I'm not sure what it is but he loves that bear! 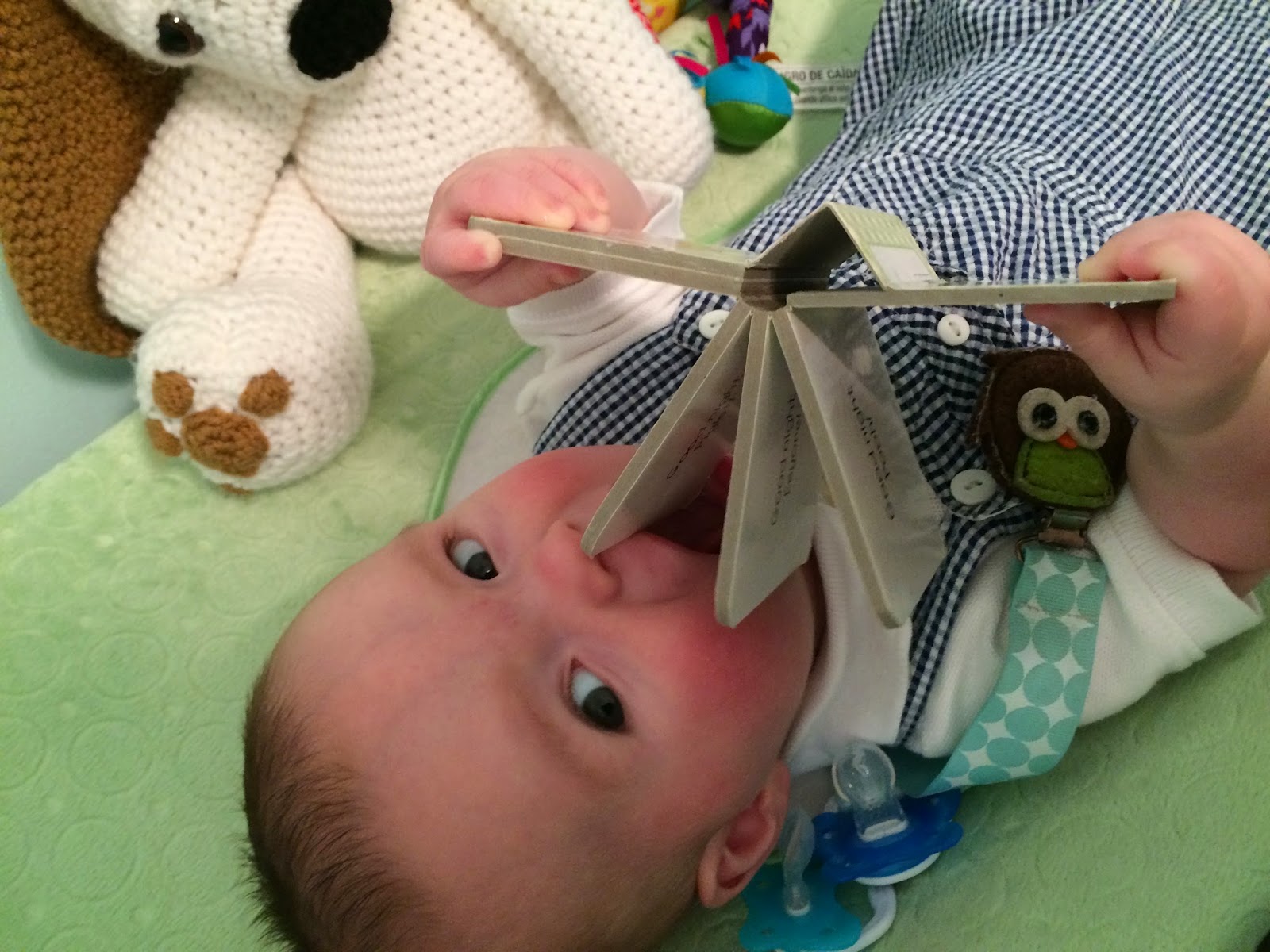 One of my favorite times of the day is picking him up from school.  I walk in the room and he just starts smiling, laughing, squealing and kicking. 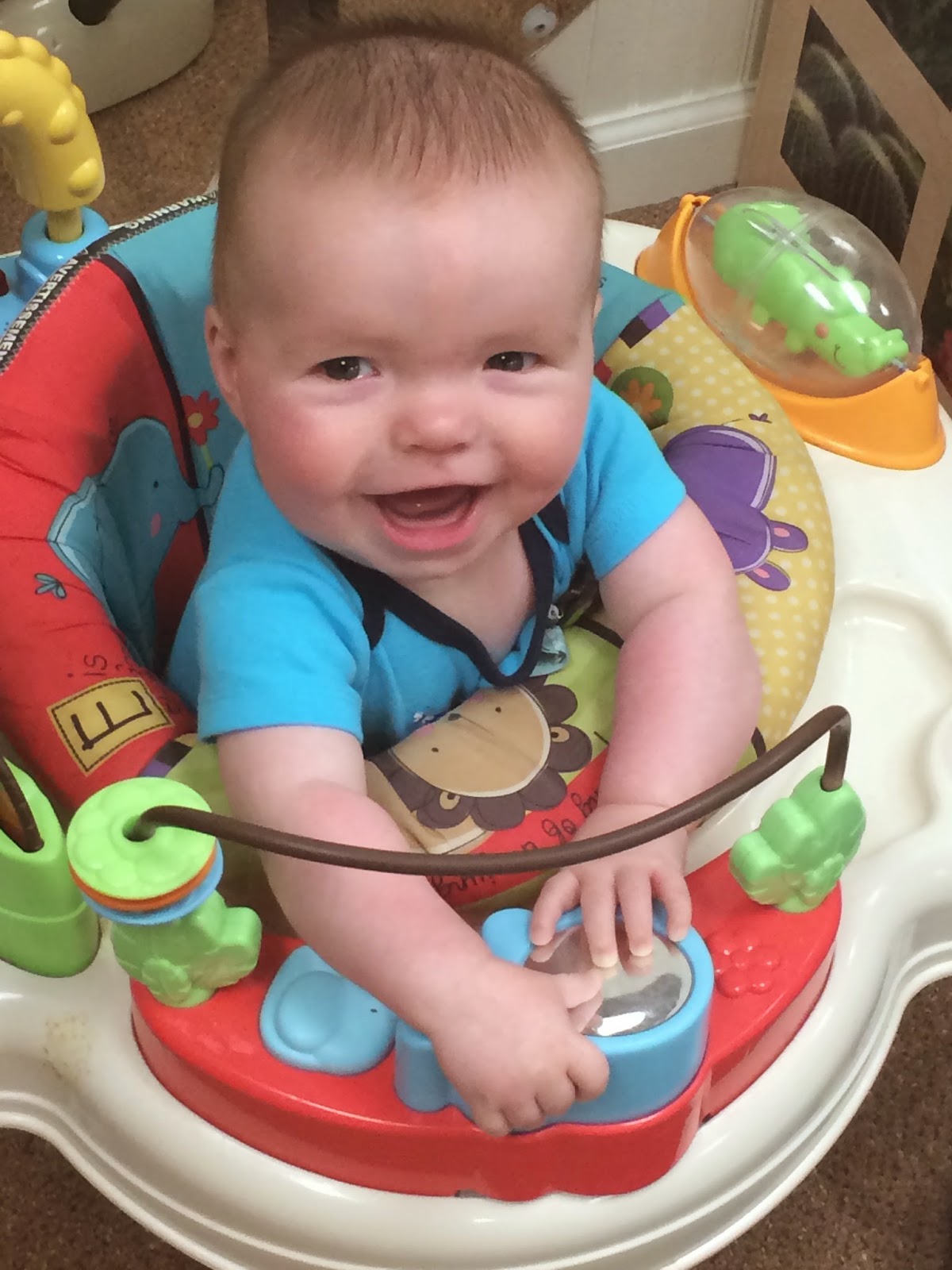 He definitely knows his mama.  It just does my heart good to have this little boy love and need me.  And I love and need him, too!
Posted by Unknown at 7:28 PM