In May, David's parents took us all to Disneyworld.  We kept it a surprise from Kate until we picked her up from daycare to go to the airport because we would have NEVER heard the end of it if we had told her earlier!  It was great.  This was the video of us telling her:

For the longest time, she was more excited about going on the airplane.  She did great!  Of course, she told us her favorite part about the plane was the snack.  Go figure!  We ride in an airplane and her favorite part is the pretzels and peanuts.  Once we got there, we had a long bus ride to the hotel - during which Kate fell asleep.  This girl was OUT!  We ate and went to bed in preparation for the next day.

The first day, we went to Magic Kingdom.  This was a very full day! 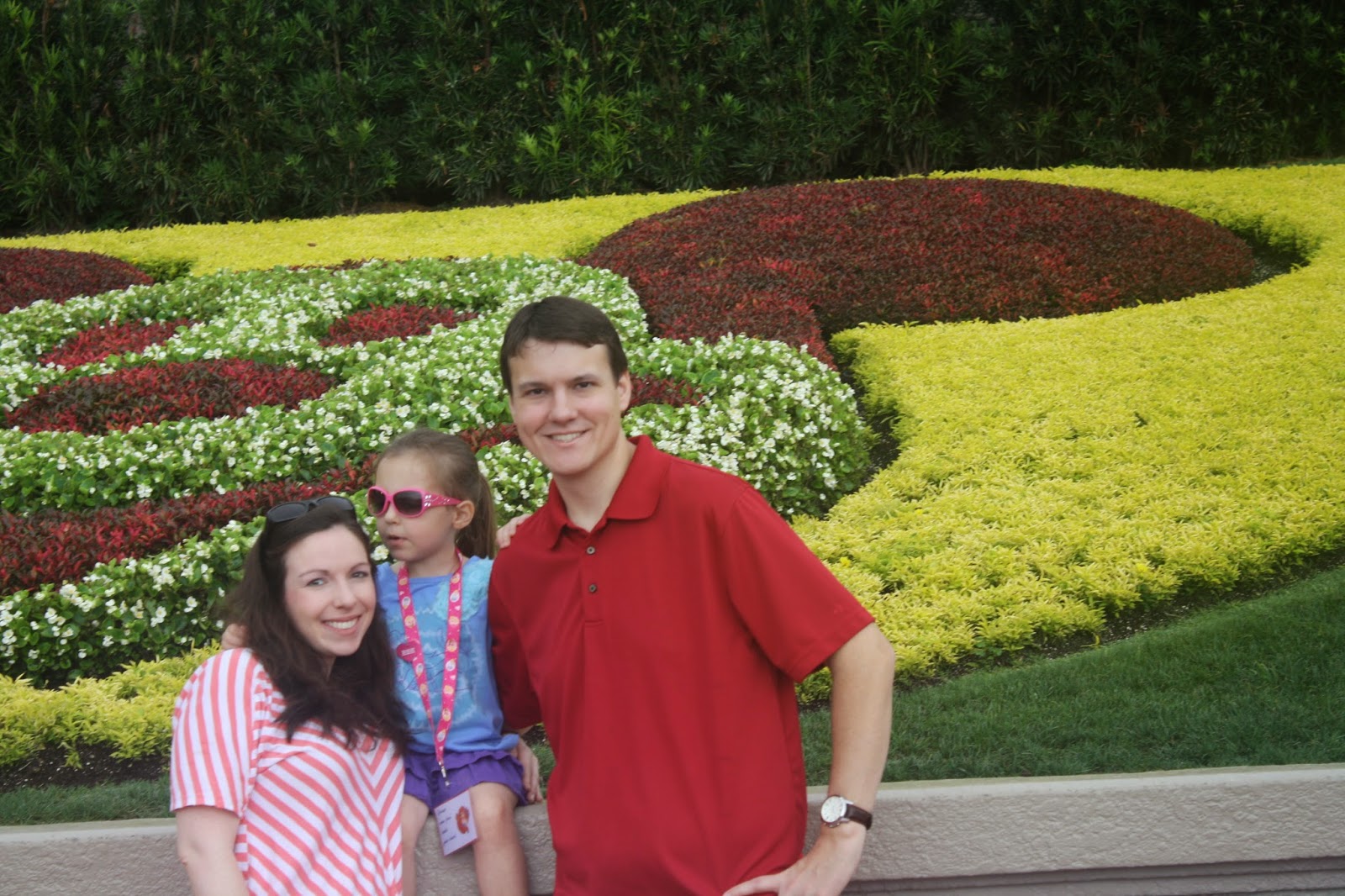 We started off seeing Goofy, 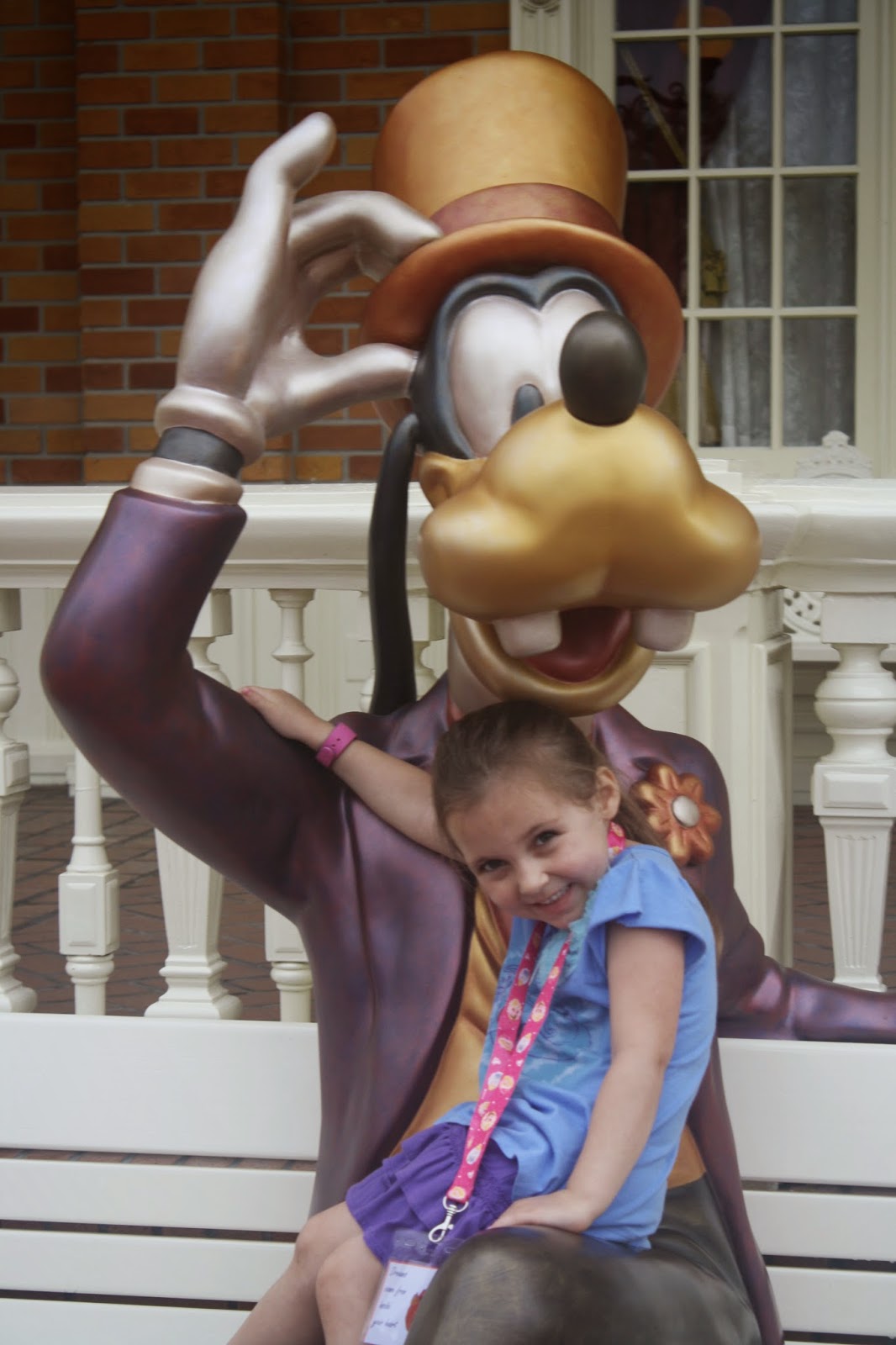 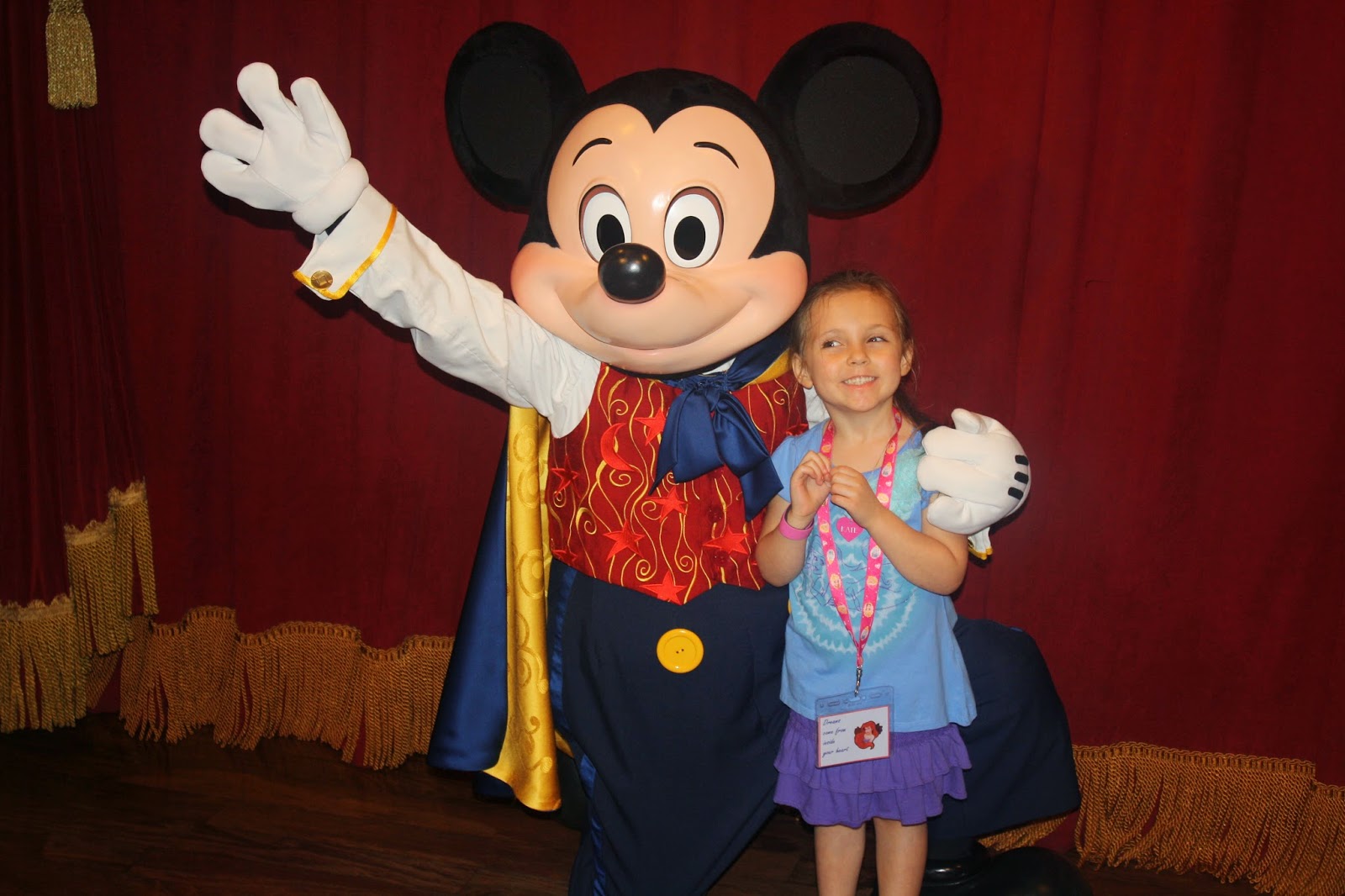 then Mary Poppins (who Kate, surprisingly said was her favorite for the longest time). 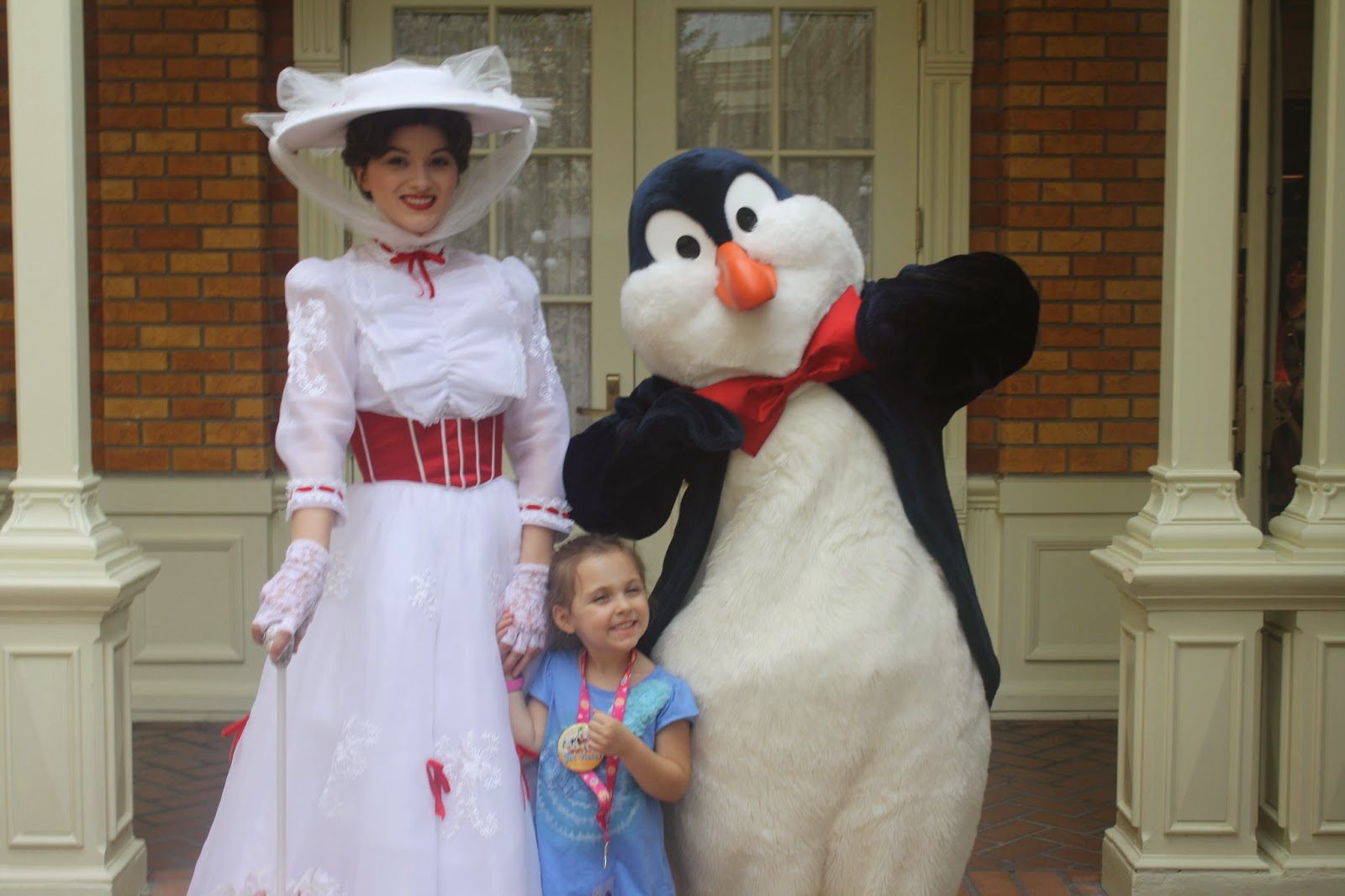 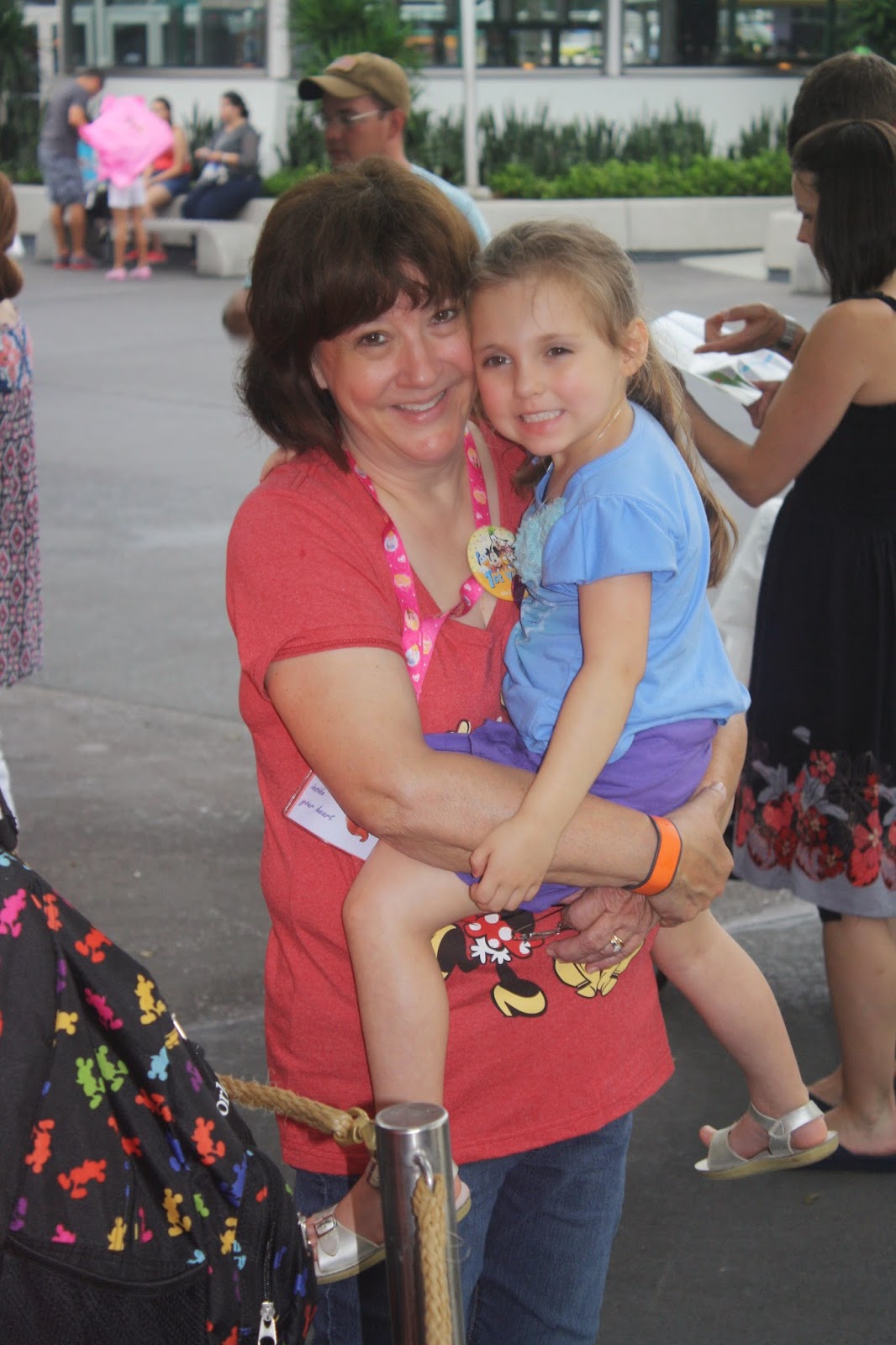 Then we went to meet Merida. 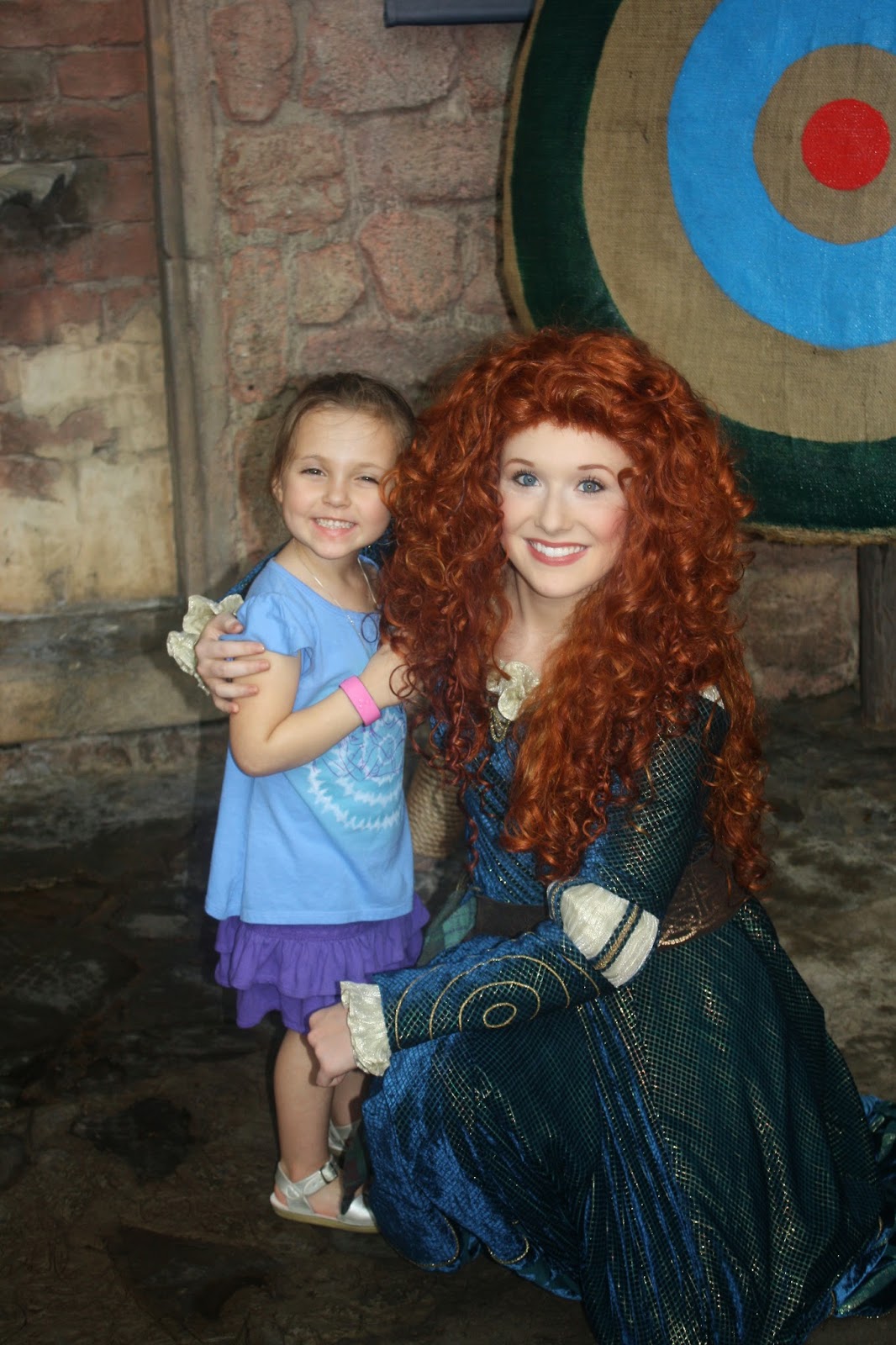 Later that day, we were scheduled to go to Bibity Bobity Boutique.  Let me just say that Kate LOVED it! 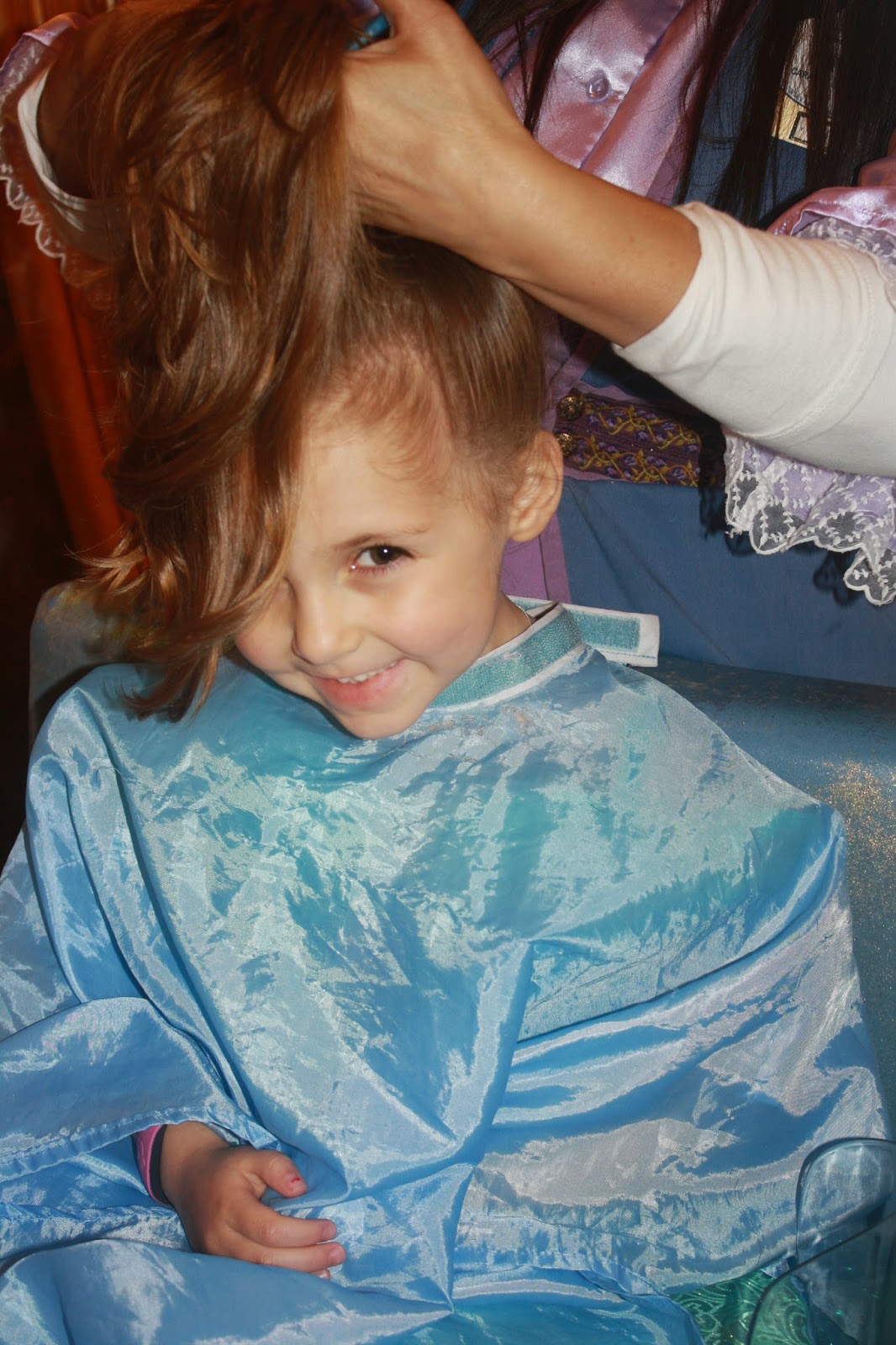 Kate-o got her a new princess outfit, which ended up being midriff showing to my chagrin.  On the hanger it looked like it was one piece.  Then when Kate was getting dressed I saw how it really was.  Alas...we got some pins and pinned it up! 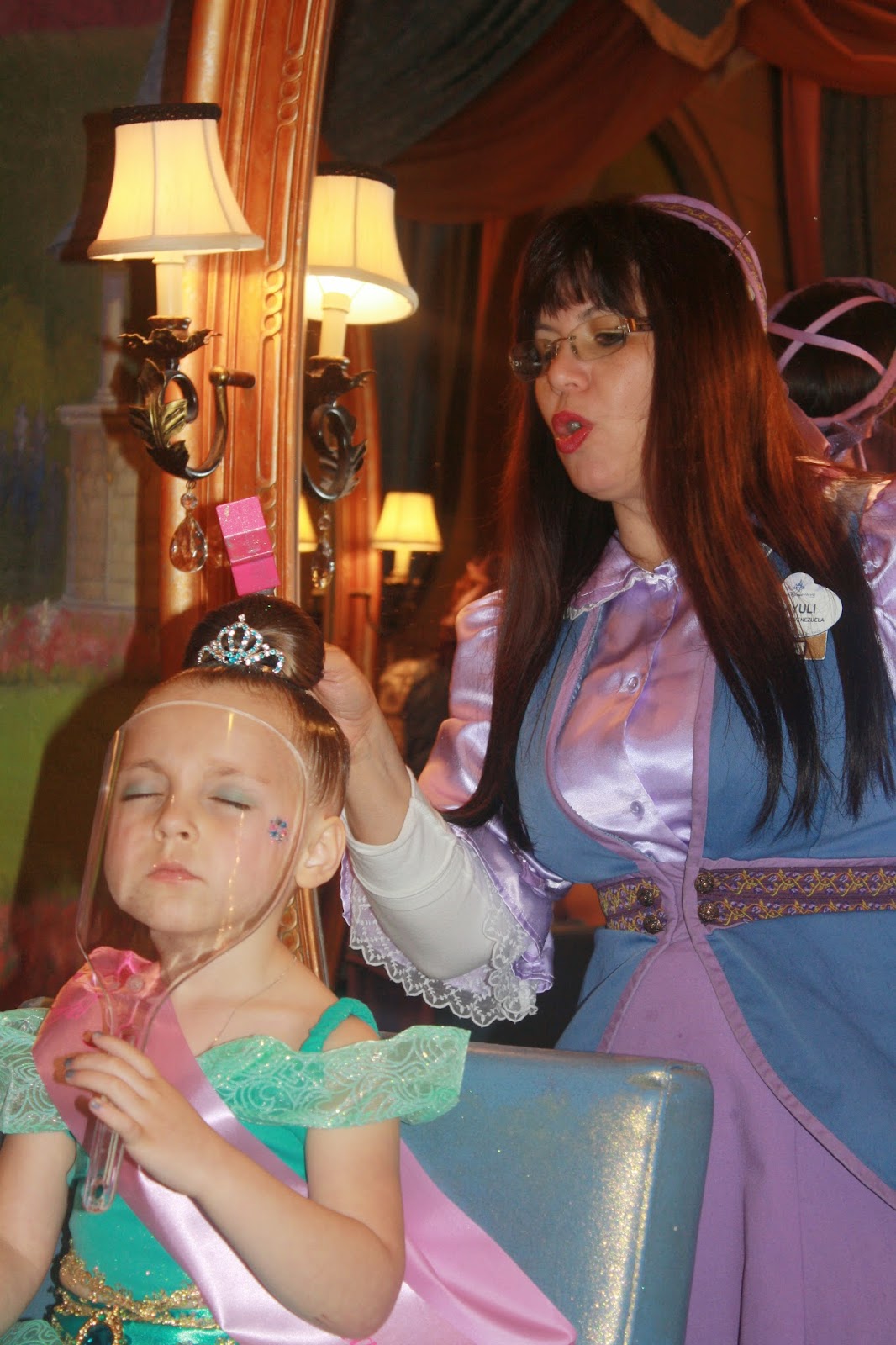 I think Kate had fun but she looked a little serious the whole time.  There's my little Jasmine. 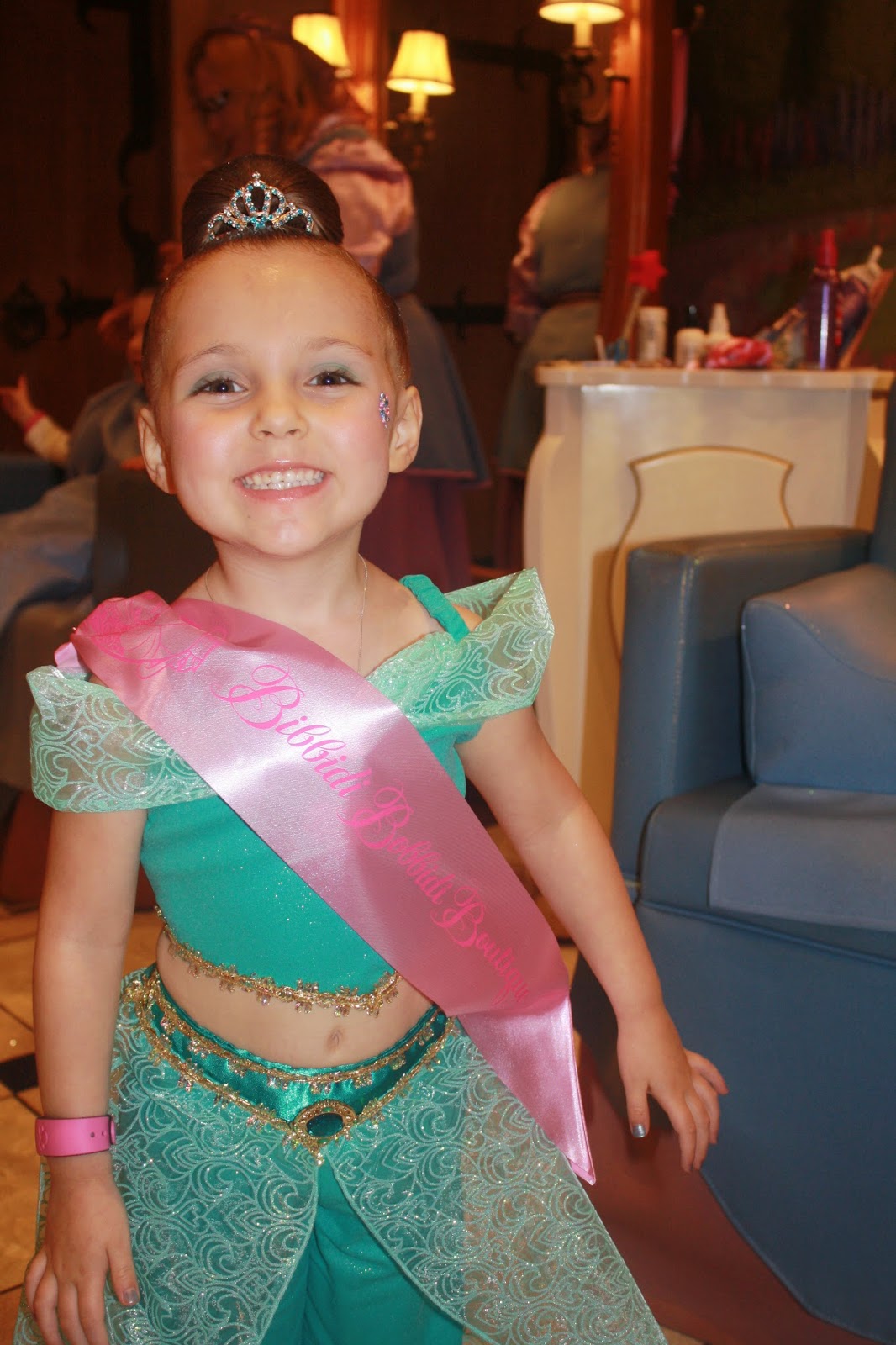 By this time it had started raining.  Everyone else went to some sort of ride while I watched the stroller.  Then we went to Cinderella's castle for lunch. 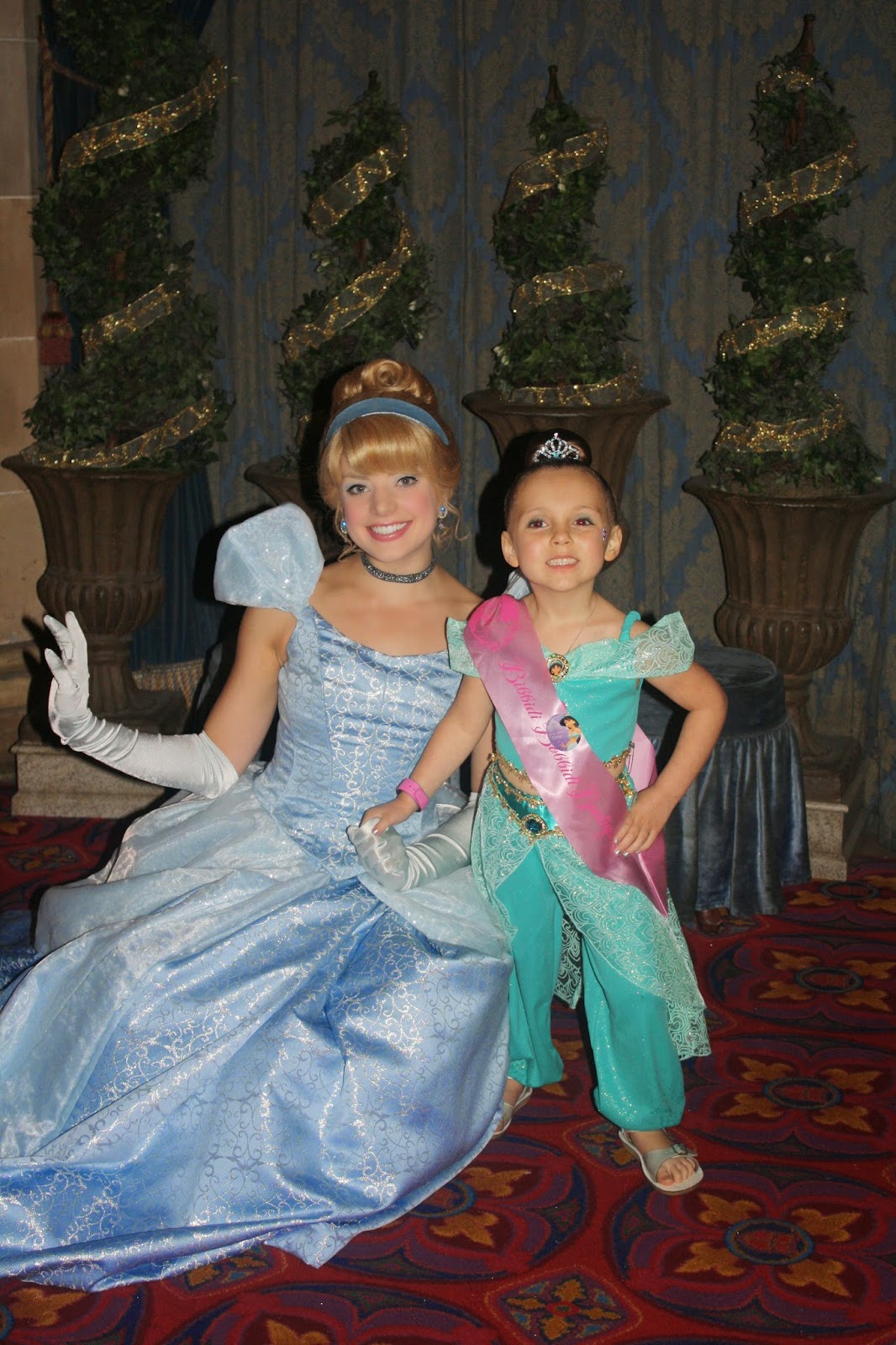 Kate was just amazed at all the princesses.  Daddy was amazed at his gluten free roll!!!! 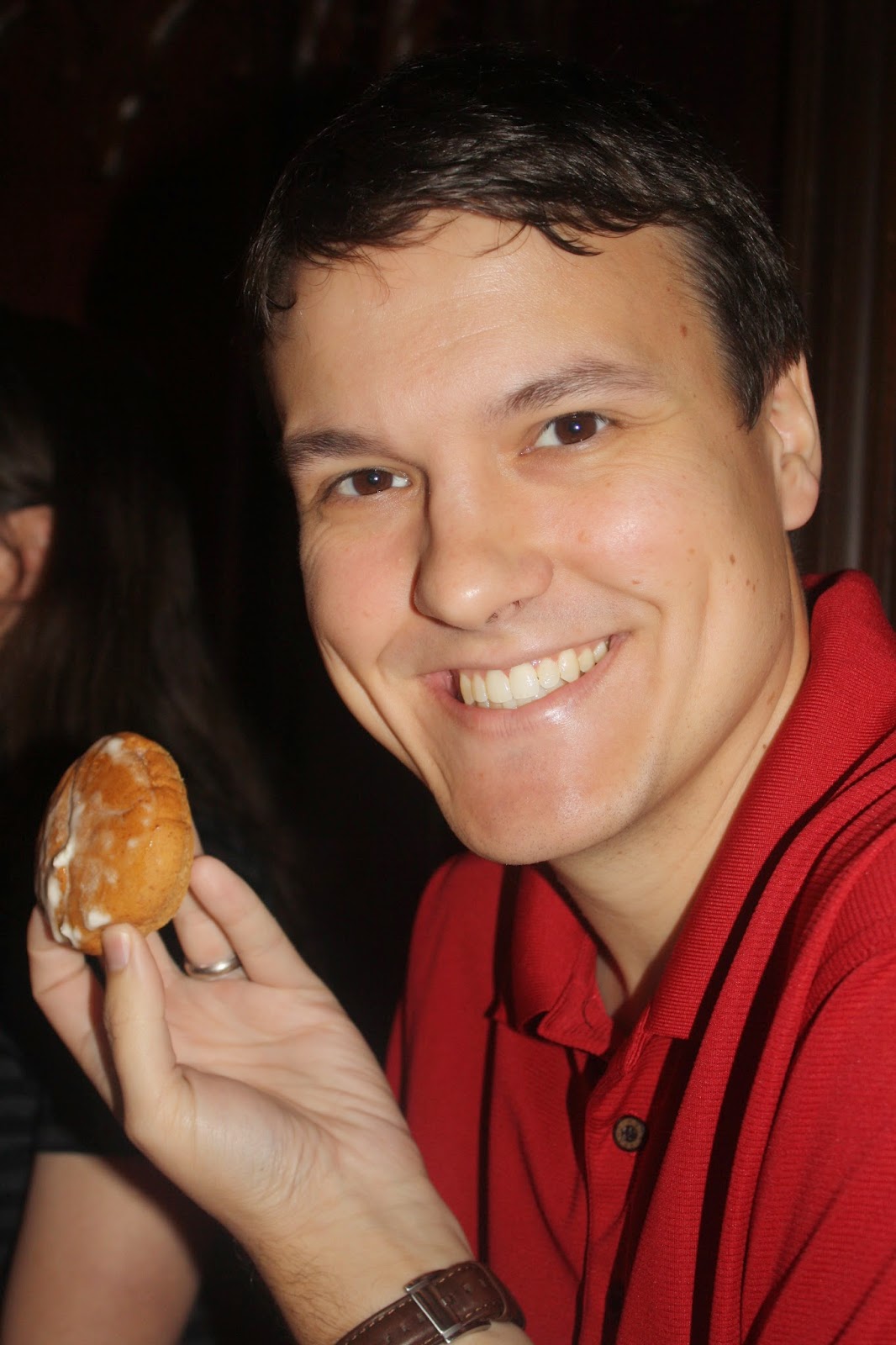 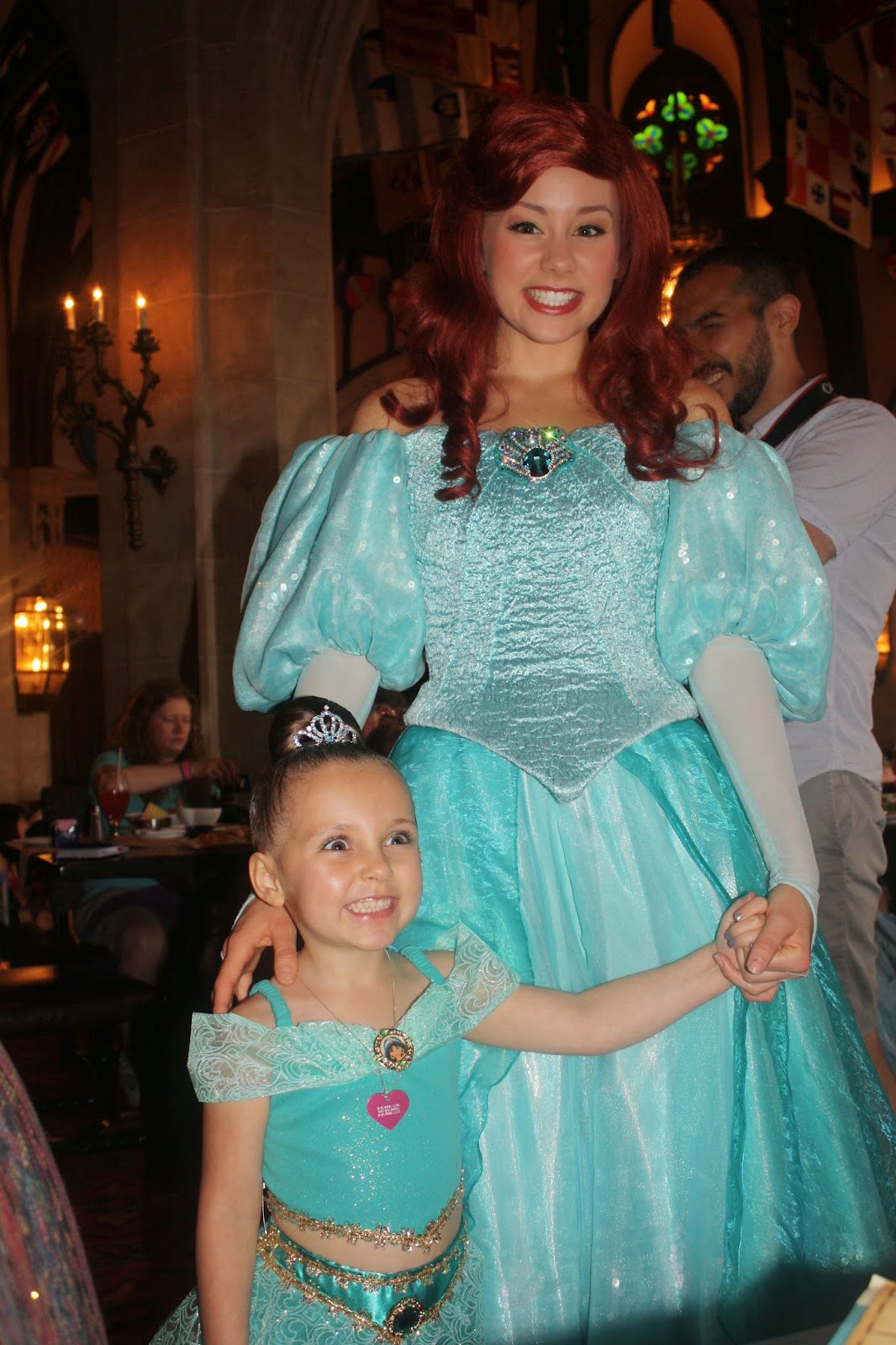 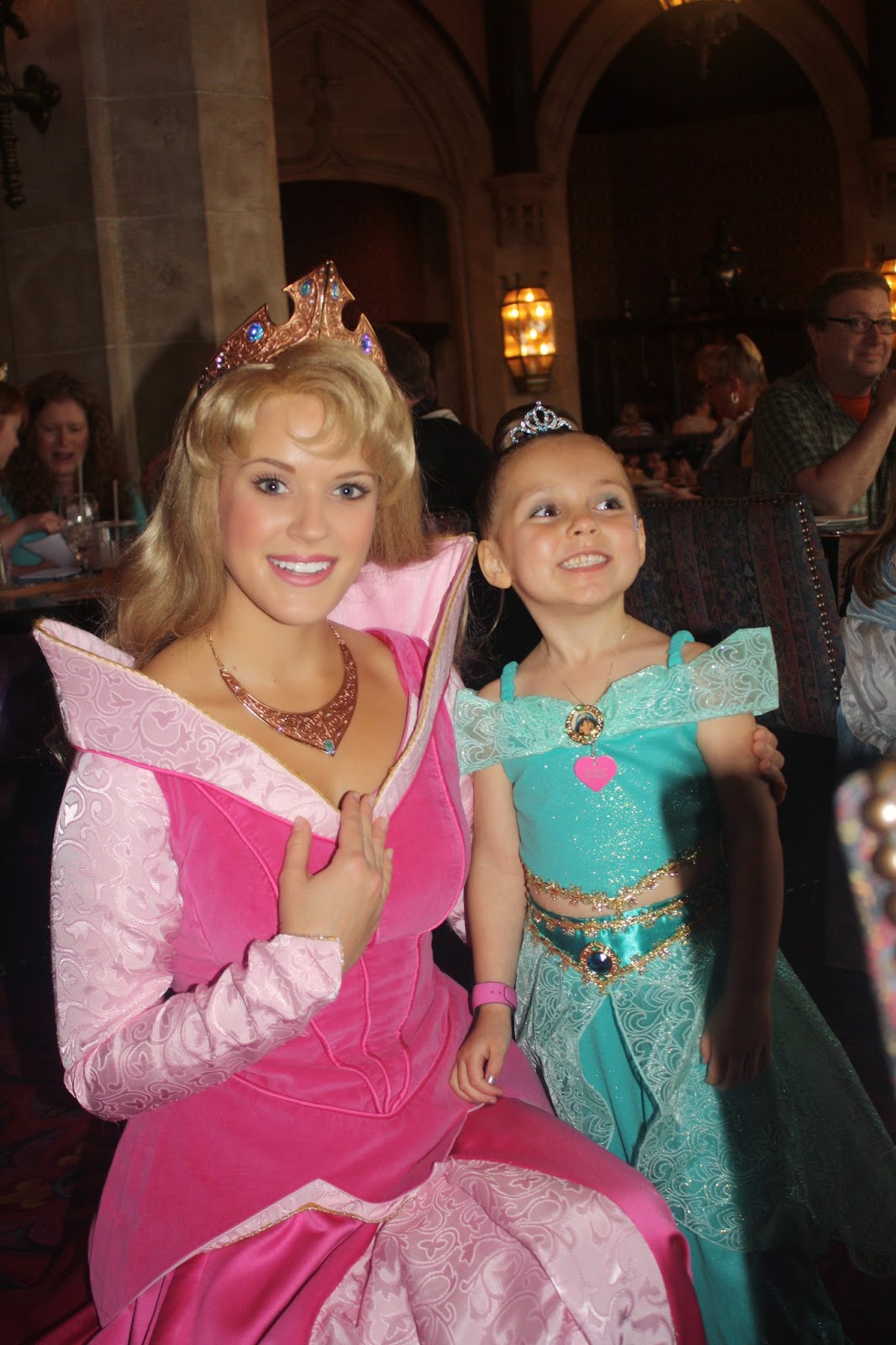 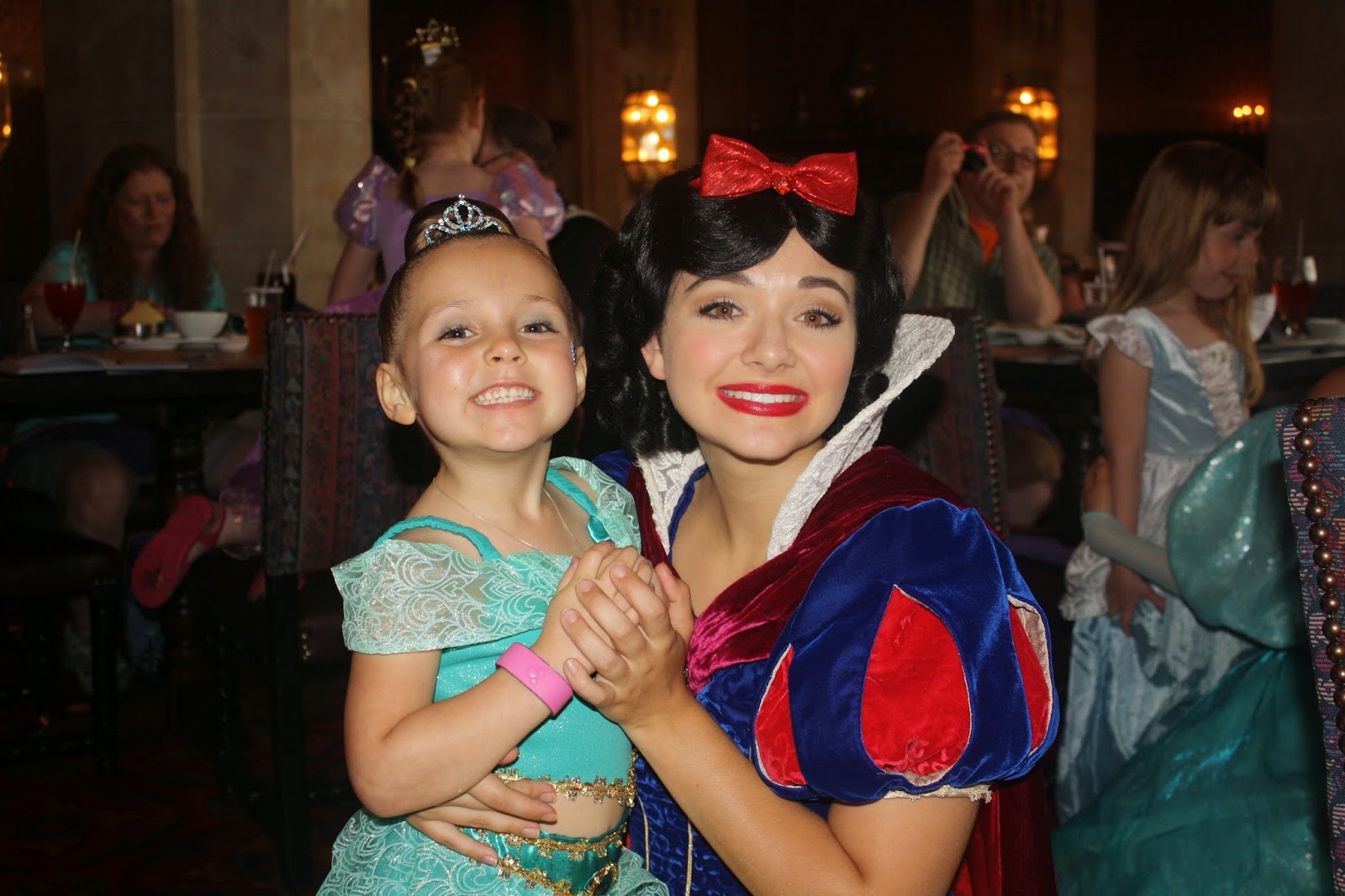 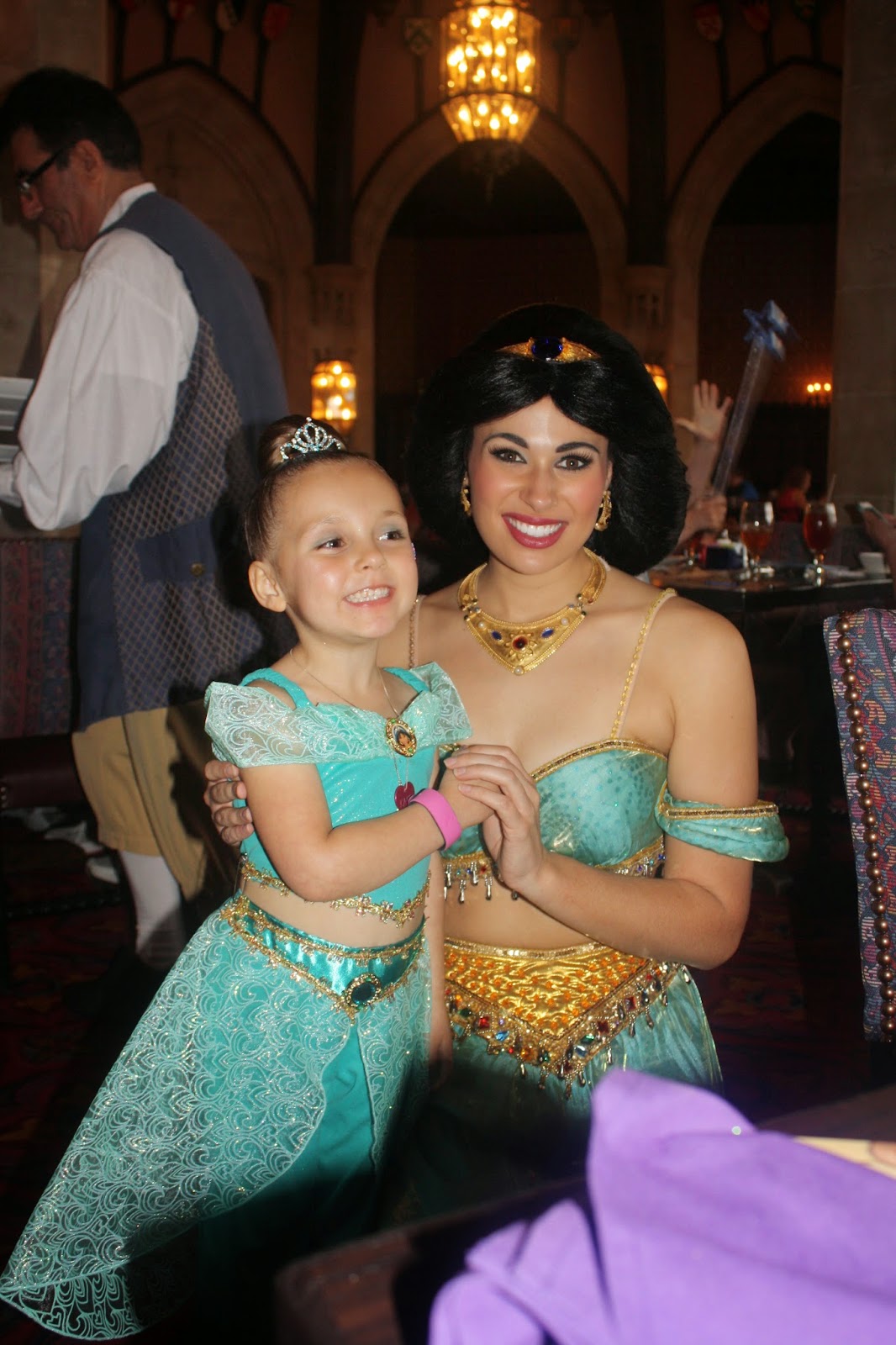 At the end of the meal, Kate got an option of apples or ice cream.  I was shocked when she chose apples.  In the end, it turns out that she thought they were just asking if she wanted apples...she thought she was getting both! 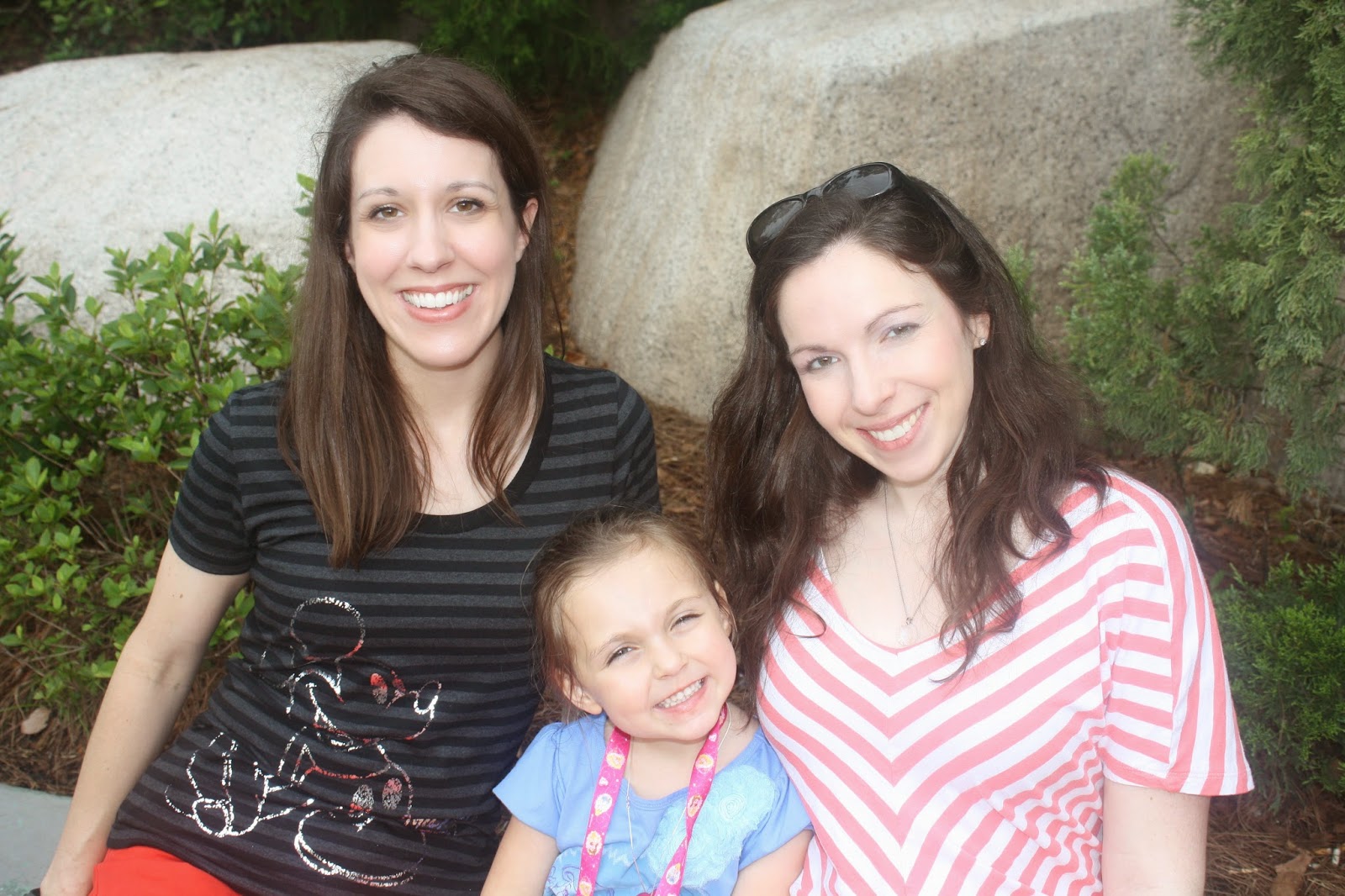 Then we went to Belle's Enchanted Tales.  We had a fast pass for this, which was great.  Kate was chosen to be the beast...and she did a GREAT job! 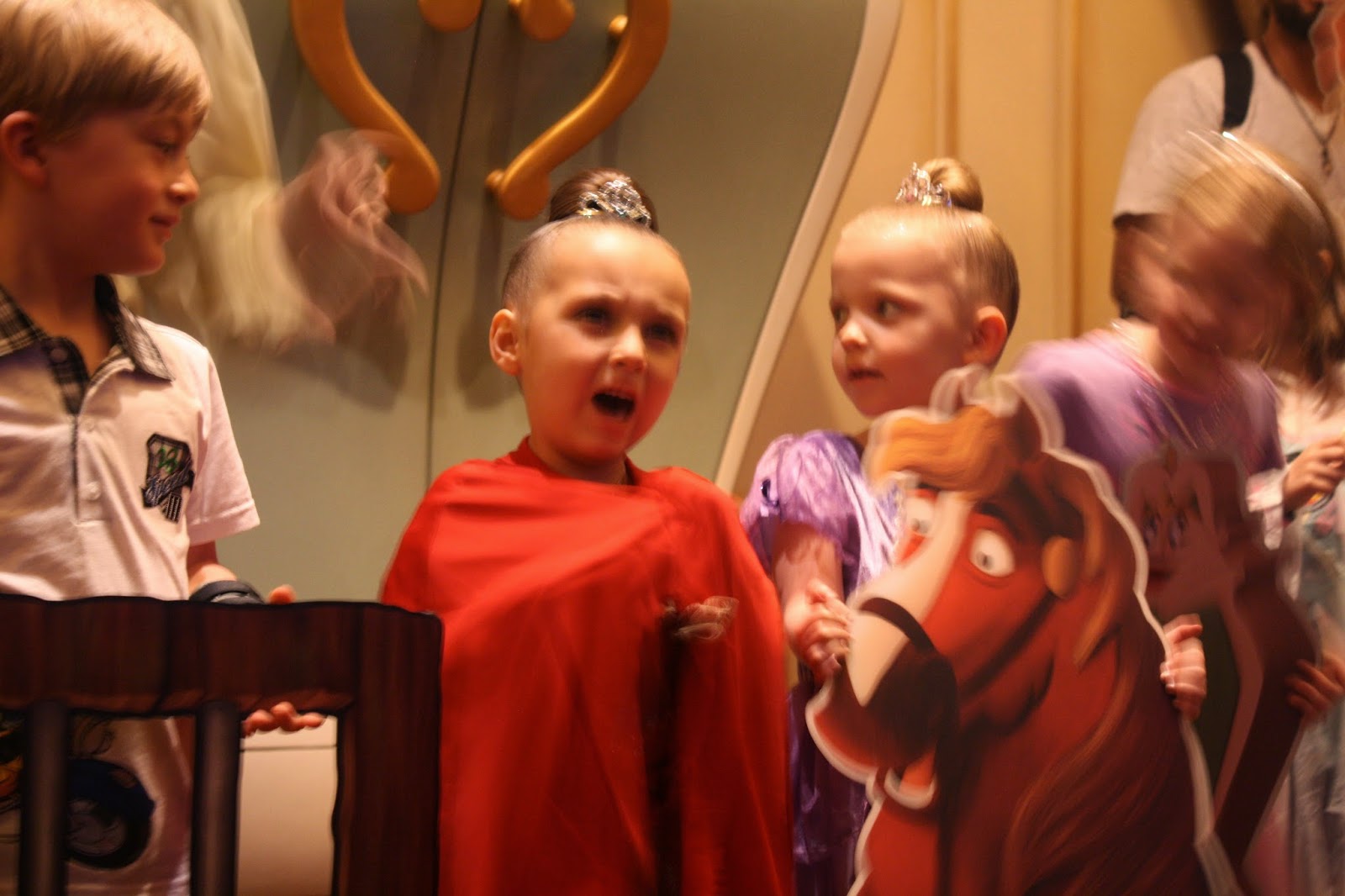 She got to roar at Belle...and in the end, got to dance with her.  What a fun experience for her...and made this Mama very happy! 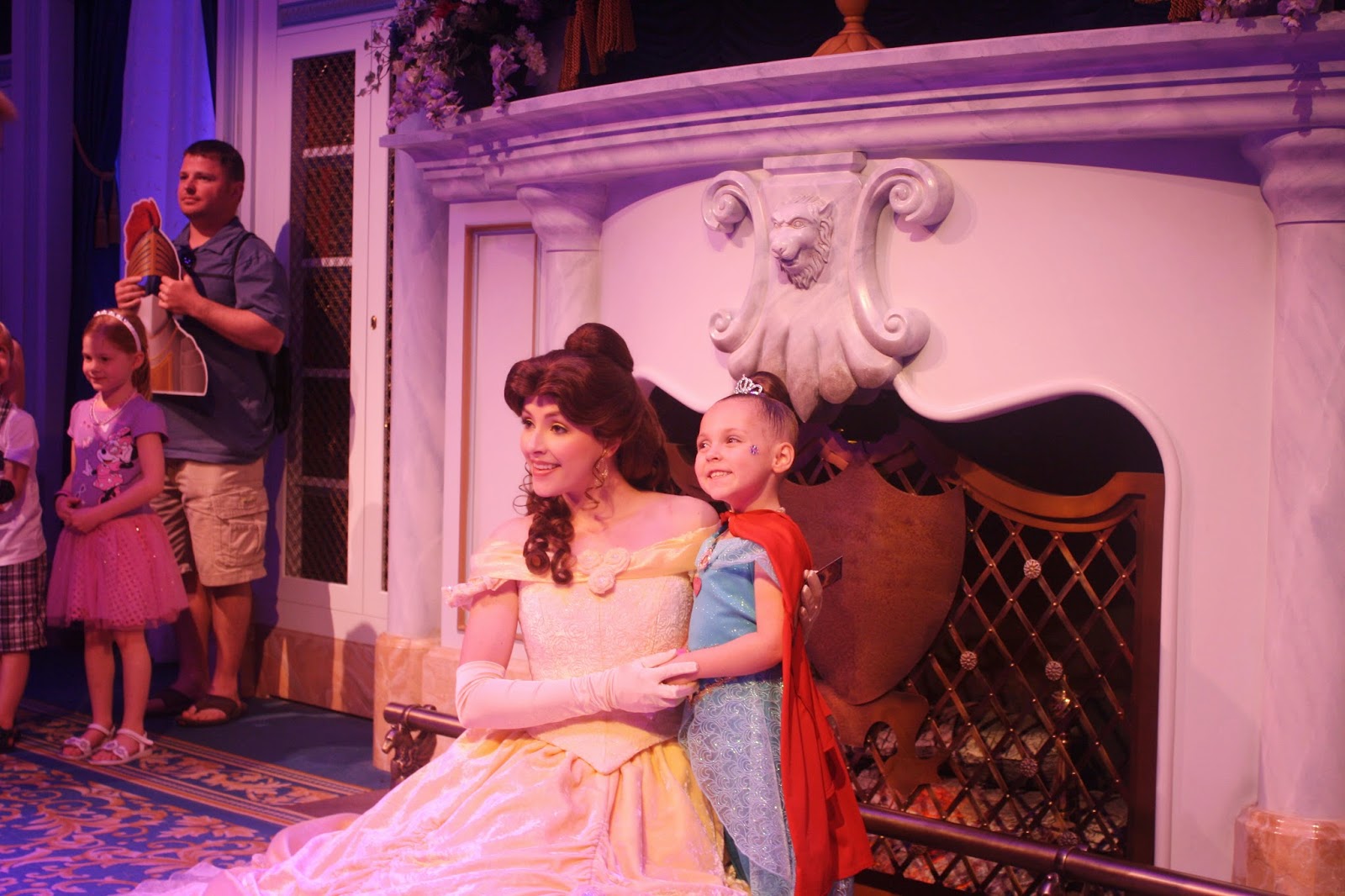 We met more princesses when we saw Rapunzel and Cinderella.  Kate was telling us this was "the best day ever" right as we went to Rapunzel.  Since that is one of the lines from Tangled, we told her to tell Rapunzel.  I'm not sure she got the reference but it was cute. 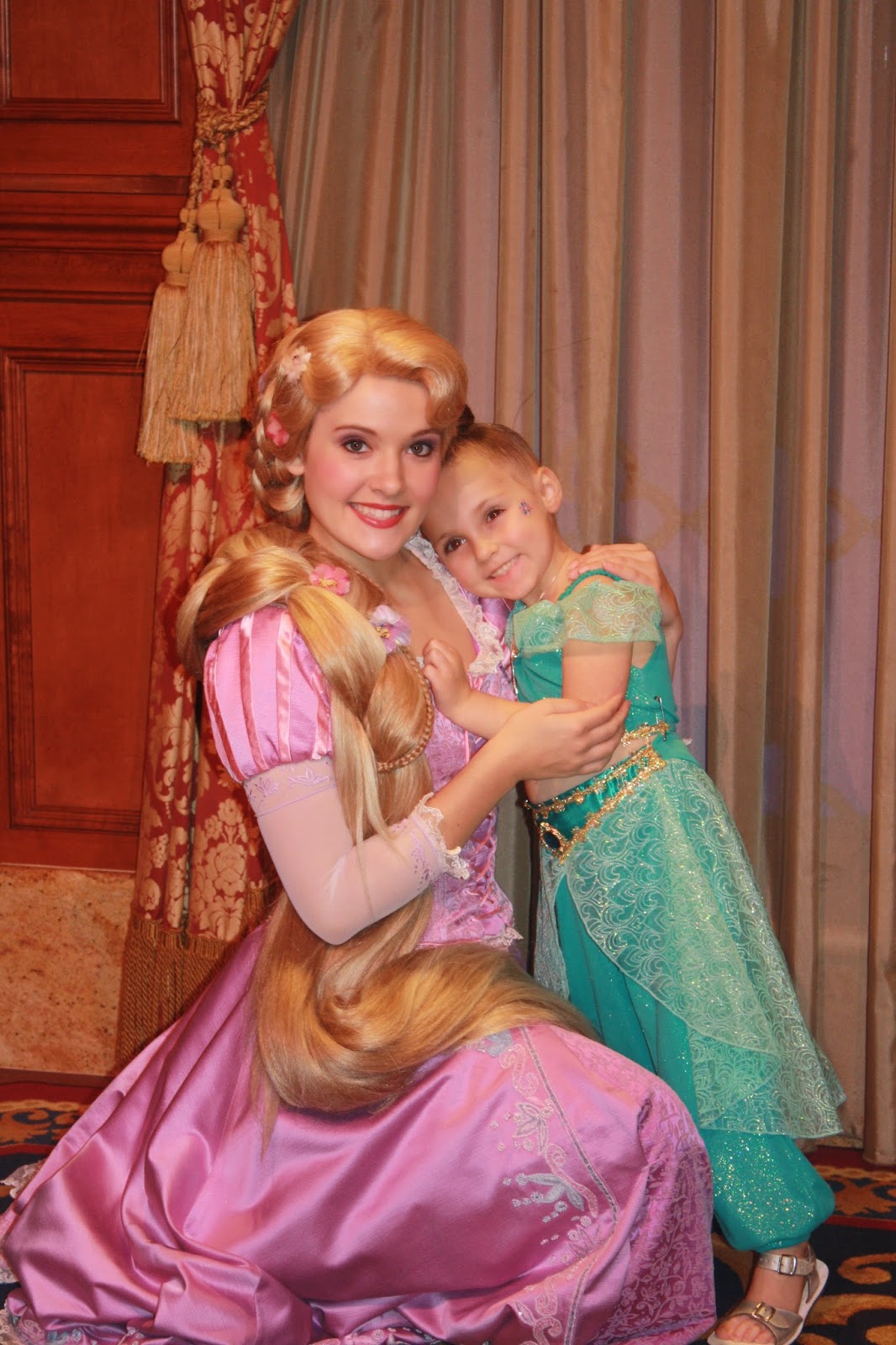 We didn't watch any parades this day.  Just rode The Haunted Mansion and then did supper.  On the way out, we were able to meet Tiana and her prince Naveen. 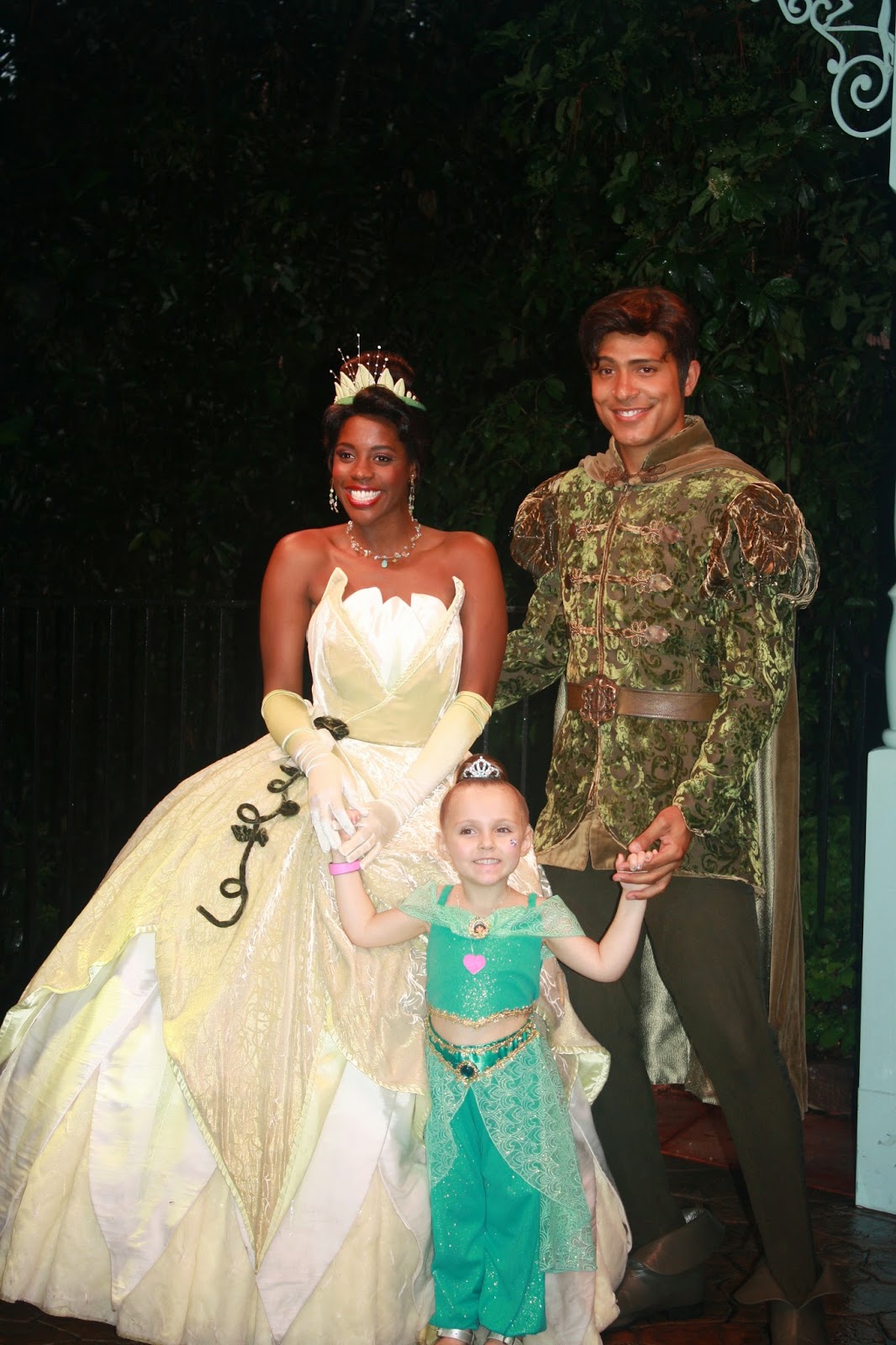 Kate asked her what it was like to kiss a frog. Naveen thought it was funny until Tiana said it was a little sticky and salty. 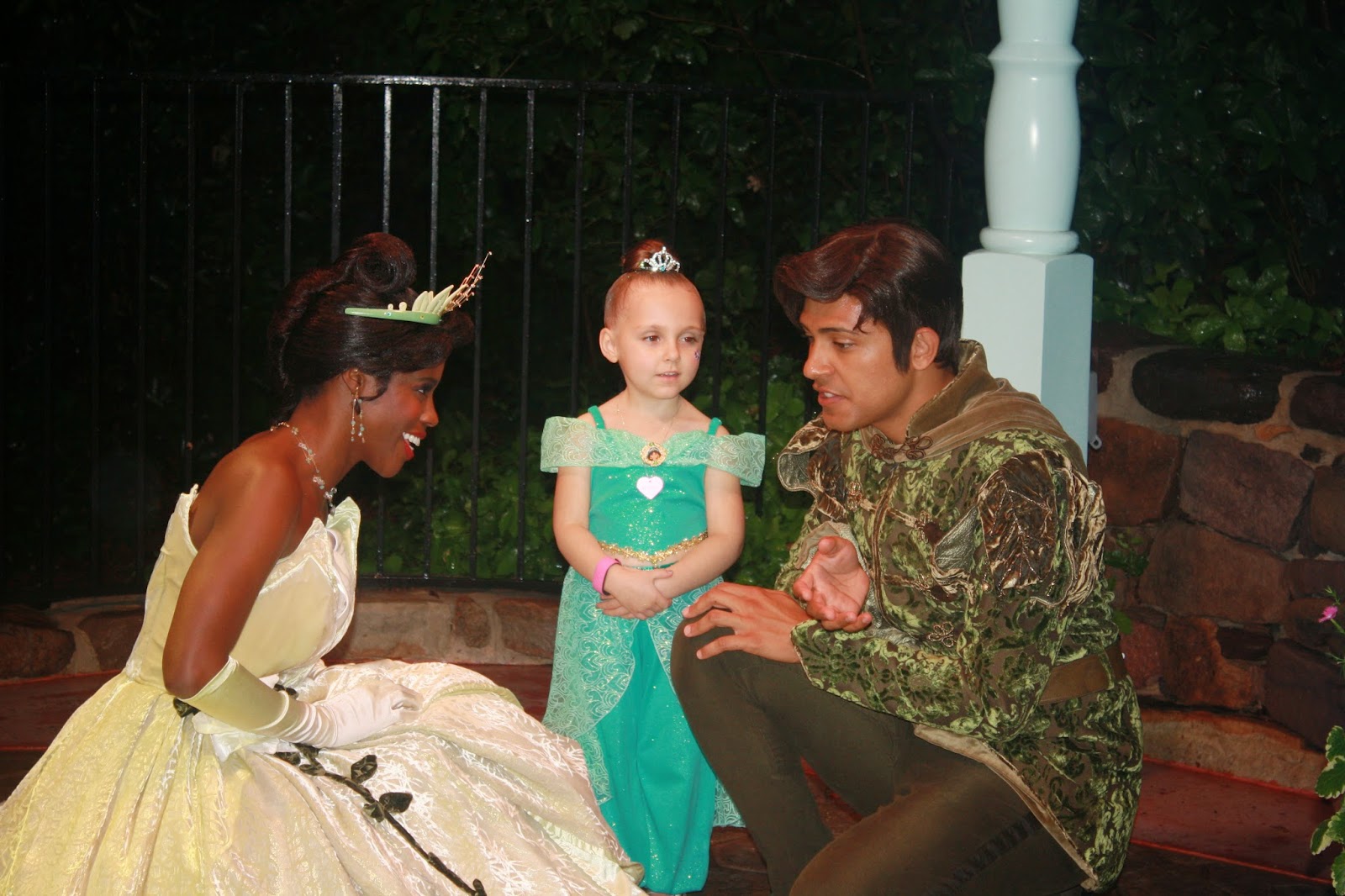