I think that last weeks post was a lot of fun.  Maybe closer to the end we'll do another one.  This week has been a little stressful just because of impending business.  We were also very busy this week, though it was a fun busy.  I got a good bit of "practice" holding babies this past weekend.  Friday I babysat for a friend so she and her husband could go out to eat for their anniversary.  K and their son are good friends, so they played the whole time.  Miss Rachel and I just played and then she went to bed, quite easily I might add.  Saturday, we had a party with some of David's co-workers.  It was an enjoyable evening, albeit K got to be LATE!  I held one of the babies for most of the night after I put him to sleep.  Sweet baby kisses.  :-)  Sunday we subbed in the nursery with the crawlers.  Shockingly there was only one baby.  David said, "Man, I'll work in the nursery every week for that!" 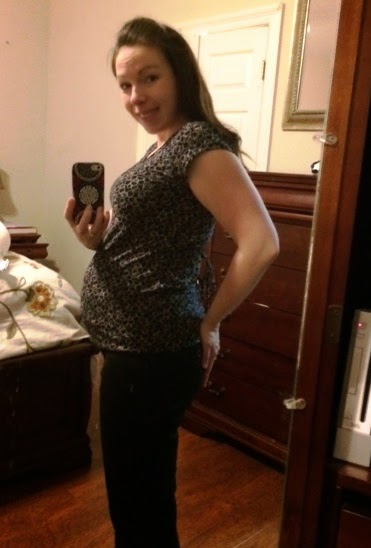 Then came Tuesday....um, yeah!  I think I was majorly overwhelmed and had a surge of pregnancy hormones or something.  I think I cried around five times that day.  Most of it was in irritation.  Then I "couldn't" find anything to wear to yet another party.  I finally found something (that was, ironically NOT maternity).  Then another dinner that wasn't appealing, so I waited to get home to eat.  K had a BLAST swimming all night except for when she ate.  I enjoyed chatting with different people I don't see much at work.  Then we left...around 845.  Close to an HOUR after K's bedtime.  She went to sleep quite quickly. 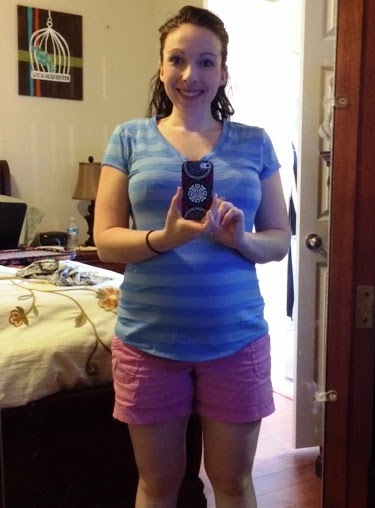 Wednesday was a fairly normal day.  I got K and took her with me to the gym and then we went to church.  She fell asleep on the way there...which made me feel badly about keeping her out late again.  Of course, she refused to fall asleep on the way home.  Thursday we had no plans and so I thought K could play in the sprinkler.  Oddly, she was excited but wouldn't really play.  Later we determined she had fever.  No other symptoms really besides clinginess and being tired.  She was in bed by about 7 and slept until 715.  She and David did some errands yesterday and she has been fine since.  I think she was just so tired that a tiny virus knocker her harder than usual. 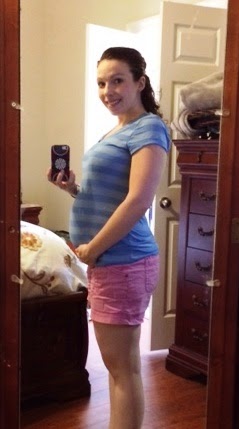 Today, she had a splash pad birthday party and tonight we go to another work party.  End of the year fun!  We close on our new house Monday and then move after that.  Craziness around here! 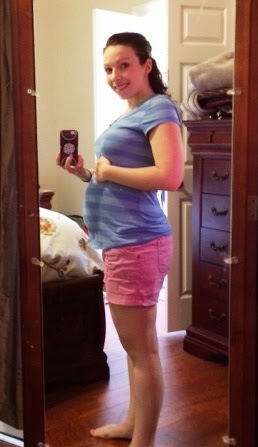 Due Date: September 25, 2014
How Far Along: 26 weeks (and 2 days)
Fruit/Veggie: butternut squash, green onion (length) - 13-14 inches, 2 pounds
Gender: It's a BOY!
Exercise: Still exercising almost daily.  I was exhausted on Friday, almost skipped though I'm glad I didn't.  Today, I'm pretty sure I pulled some sort of muscle in my gluteus maximus on the right and my calf on the left.  I'm falling apart...or maybe my ligaments are starting to relax?  Guess it's time for that!

Sleep: I'm pretty consistently up at least twice a night but can fall asleep fairly quickly.  Apparently, I sleep better on my left side because I always wake up facing that directly.  The pregnancy pillow is GREAT for naps.  David and I might switch sides of the bed when we move so I can try it for night time sleep and not disturb him.  I'm starting to get hot in the middle of the night and want to sleep without covers...but this apparently messes up David's covers as he always yanks at them when I get out from under them.  Another reason to switch sides!

Cravings: Very difficult to tell.  Sausage biscuits, cool, sweet things like fruit and lemonade, cereal, Carbonation!  Otherwise, it's actually pretty hard for me to actually decide what I want to eat.  Nothing just really stands out and being good.  Is this NORMAL?!  It seems strange to me.

What I love: Watching for the baby to move!  I actually got a video the other day.  Getting closer to moving. Looking at stuff for the house.

What I miss: turning over in bed easily, sleeping well, being able to go "full out" at the gym, having energy for the WHOLE day!  None of this has really changed recently.

What I'm looking forward to: Getting the fabric swatches in on the bedding options for the nursery.  Moving and setting up the house, hopefully selling this house, baby showers, getting K ready for school

What I'm thankful for:  My sweet husband, always taking care of me.  He is so understanding about my mood swings, my inability to help as much with packing (Y'all, I have been SO tired!). That K continues to show interest in learning about Jesus and the actions involved in faith (telling other people!).  A healthy pregnancy.  The rain that is currently falling outside my house...love that sound!
Posted by Unknown at 2:38 PM