Somewhere along the way, I got the idea that making lasagna with won tons would be fun.  Maybe it was the fact that I had a package of won ton wrappers in the refrigerator that I needed to use.  Maybe I really thought it would be fun.  Either way, I finally did it! 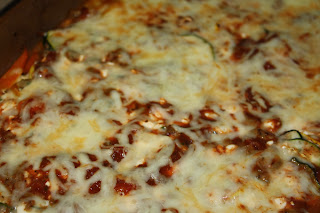 David gave me "permission" to make a veggie lasagna and I decided to use the won tons.  I just lined the pan with won tons and did layers of veggies, spaghetti sauce, and cheese mixture the repeated.  It wasn't a complete loss but not a complete winner either.  Honestly, I think the thing that we all disliked the most was the wontons.  They just lent a funny flavor to the lasagna. 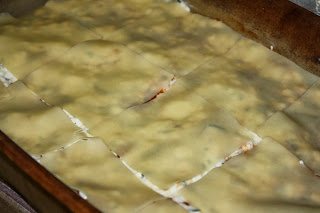 Oddly enough, the veggies weren't the problem.  David actually took this to work for lunch on several days.  I'm assuming he actually ate it.  ;-)  Unfortunately, he caught a few of the thicker slices of eggplant.  I decided to slice the eggplant thinly and roast it but I caught a few slices more thickly than I would have liked.  I guess I could have pulled out my mandolin but I didn't.  I will definitely be doing veggie lasagna again (though I KNOW that David still wants the real lasagna more!  Gotta cook for myself some, right?!)...just not with wontons. 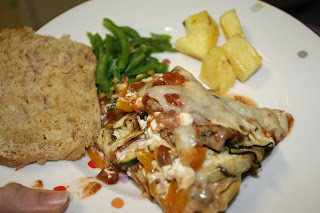 Preheat oven to 350 degrees.  Prepare vegetables.  Mix the squash, zucchini, and onions together but keep the eggplant separate.  Meanwhile, mix cottage cheese, egg, Parmesan cheese, salt, parsley together in a bowl.  Spread about 1/4 cup spaghetti sauce in the bottom of a 13x9 pan.  Line with wonton wrappers.  Top this with a layer of the eggplant followed by the squash mixture.  Layer with spaghetti sauce. Then top with cheese mixture and mozzarella cheese.  Repeat layers ending with mozzarella cheese.  Place pan in oven and bake until cheese is melted and bubbly.  Enjoy!
Posted by Unknown at 9:00 AM

My name is Freddy. Surfing on the net I found your blog and noticed you have a great number of tasty recipes there, that is why I am contacting you. I wonder if you would like join our website www.mytaste.com and receive more visitors to your blog through making your recipes available to a greater number of internet users.

Mytaste.com has been launched recently and from the first day it has gained popularity among food lovers. Today the site can be found in 45 countries, where we deliver thousands of visitors to food blogs daily. Some Top Food Blogs on our pages receive more than 20 thousands unique visitors a week.

Recently and to improve the user experience and develop their loyalty we added social features that allow our users to create cookbooks, save recipes and follow other users. This means that when a recipe from your blog is saved, the user will always have the opportunity of visiting your blog again.

So, if this sounds like a good plan to you, please visit our website & add your blog through the Top Food Blogs section here: www.mytaste.com/top-food-blogs. There you will find all the instructions you need to follow to become a part of our bloggers family.

Hopefully your food blog will be up there in the top!