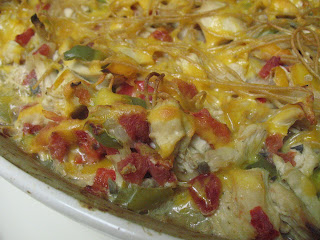 So, I pulled together the chicken and veggie mixture, cooked the squash, and was about to combine them when I tasted the squash. OH MY GOODNESS, I don't know if it was the squash or if spaghetti squash and rotel tomatoes don't go together, but that was the worst taste I had had in my mouth in a long time. I mean, I almost involuntarily spit it out! I'm glad I decided to taste the squash first because it would have ruined the whole thing. So, instead of my attempt at a morph, I just pulled out the already opened box of whole wheat spaghetti and used that. It was less noodles than called for, but that's fine with me. 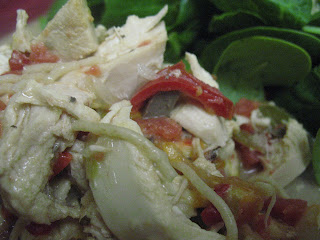 This turned out really good except that I think I overcooked the chicken...it ended up a little tough. I did make a few changes (one intentional, the other accidental), which I'll not in pink below. With the peppers in this recipe, it's a good entry for Sweetnicks' ARF Tuesday. Check out her blog and give a little encouragement...she's got to have a root canal, which is not much fun! 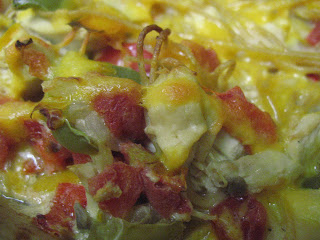 Chicken Spaghetti from my mom's recipe box
4 chicken breasts (I used 3)
medium onion, chopped (I used a bag fof frozen pepper and onion)*
small green pepper, sliced (I used a bag of frozen onion and pepper)
1/3 stick margarine (I just sprayed with PAM)
1 can mushroom soup, 98% fat free
1/2 can water
1 can Old English cheese (I used grated sharp cheddar - 1/2 cup, could have used more - I would stick with the Old English cheese, it makes it creamier, but if you want to make it healthier, just use some sharp cheddar - high flavor with less!)
1 can water chestnuts (forgot to get these and missed them)
small bottle sliced stuffed olived (forgot these, too...missed them as well)
small box angel hair pasta (I used whole wheat and less, because that's what I had...still would like to try spaghetti squash...what do YOU think?)
1 can Rotel tomatoes
Cook chicken until tender. Chop. In skillet, saute onion and bell pepper. Add soup, water, and cook over low heat. Add cheese. Allow to elt and add water chestnuts, olives, and toatoes. Remove from heat. Cook noodles. In a casserole put a layer of spaghetti, chicken, and sauce. Repeat layers (OR just mix it all together and pour in the casserole!). The casserole can be frozen at this point. Bake at 375 for 40 minutes.
*With the price of peppers right now, this is probably more friendly for the budget as well.
Posted by Unknown at 6:21 PM

You know what? I think the whole wheat pasta was a great choice anyway. I like spaghetti squash, but no one else in my family does. Whenever I try to make it, they threaten to revolt!

I hate it when an idea doesn't work out! Drives me nuts until I figure out what went wrong.

That being said, the spaghetti version sounds much better, although spaghetti squash is one of very few vegetables that I don't like anyways.

As always, you amaze me with your kitchen creativity! Way to salvage this dish.

Oh well, it sounds like one of my kitchen endeavors. I constantly forget ingredients and sometimes over cook the chicken, I hate that!
At least it turned out good in the end, that's all that matters.

SGCC - I used to not like it but enjoy it now. Whole wheat worked well.

Erika - I think the spaghetti version probably IS better, I just wanted to see what the squash would do.

Claire, I love your blog. Used some of your ideas tonight in this chicken spaghetti dish. Loved the water chestnuts in the recipe and I too used whole wheat pasta. I decided to make a white sauce with evaporated milk to replace the soup. I added the rotel tomatoes and "around" 3/4 cups cheese and sliced olives. I then replaced half of the chicken with portabella mushrooms. I liked it and of course this lowered the fat. Thanks for your ideas. You are very creative. I am going to enjoy following your cooking!!