After I made panzanella, I got an e-mail from Linda telling me about fattoush. It is a Lebanese version of panzanella using pita bread and lemon instead of Italian bread and balsamic vinegar. This is full of herbs and veggies. I kind of combined the recipe from Linda with another one that I found. 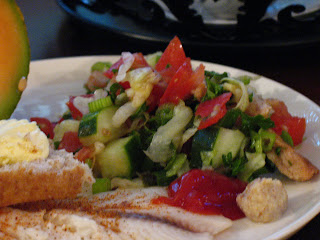 Because of all the veggies, including tomatoes, which are full of antioxidants, this is my entry to Sweetnick's ARF Tuesday. Stop by her site and check out the other yummy recipes that are sure to be there! The recipe is what Linda sent me. I'll make note of the changes that I made. 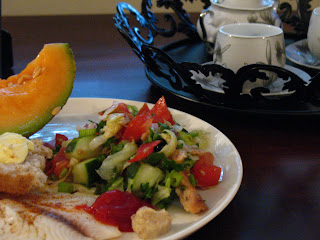 Chop finely and add to salad:
¾ cup parsley
¾ cup mint leaves
¾ cup purslane (optional, I think because it is hard to find) - I didn't use

Stir in:
Juice of one lemon - I used 3 T lemon juice
½ cup olive oil - I used 1 T and 3 T water because I saw this as an option from another recipe AND I ran out of olive oil! OOPS!

PS - I just bought a new cookbook yesterday and it has a cornbread panzanella...I may beat Cate to it! ;-)
Posted by Unknown at 7:12 PM

That looks really refreshing! I might just try that, I just bought a fresh cuke and I have some pita bread in the freezer. Thanks for the idea!

That looks great! I was going to make panzanella this week but didn't get around to it. Now here's another recipe to put in my "to try" pile.

I just saw Nigella make this over the weekend. Your version looks better.

You are so on the ball, I have not tried it yet. My husband's boss gave me the cook book that it came from, so I am hoping to make it and sent it in for her to try. She is a vegetarian like me, so I know she will love this recipe. Thanks for trying my recipe and thanks for linking over to me. I would love to have some new readers.

I love this salad - does the US version of Nigellas book mention using Za'atar sprinkled over it?

Annie - Thanks! It's really good but I think would be better if I had someone to eat it with me!

Alisha - Oh, do try the panzanella...though this one is good, I honestly think I like the flavor of the balsamic vinegar better. Maybe use pita bread with the vinegar...another salad for me to try!

Paula - WOw! What a compliment! Thanks.

Linda - I don't think I realized you were vegetarian. It is a very good salad...I'm going to be making things like this all summer to take with me to the hospital. No prob on the link...I get excited when I'm linked, so I always try to link other people as well.!

Freya and Paul - I have no clue!!!! I haven't looked at Nigella's book.

Kristen - Thanks! I just love the food this time of year.

Jenn - Thanks! I've enjoyed it.