A few weeks ago, Cate mentioned a new cookbook she had gotten. She talked about some of the recipes in the book, including a cornbread panzanella. This sounded GREAT to me, so I told her that she should make that and post about it, while at the same time mentioning that I had never eaten panzanella. 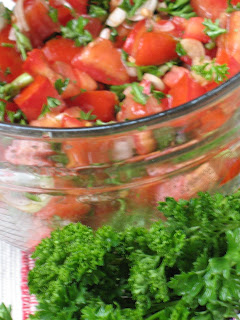 Well, we made a deal...I make panzanella and she would make the cornbread panzanella. Tada...I've done it! SO GOOD! As I was making this, the aromas just flirted with my tastebuds! It took me back to Kyrgyzstan with the wonderful fresh tomato and cucumber salads with vinegar poured over them. I immediately looked forward to eating this salad. 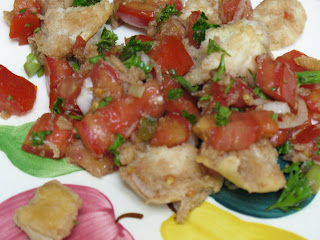 What a super way to use up some stale bread. I'm already ready to eat lunch tomorrow! Because this is FULL of antioxidants from the tomatoes, this is my entry to Cate's ARF Tuesday over at Sweetnicks. Check out the other great entries tomorrow. You'll be sure to find something that you want to make! 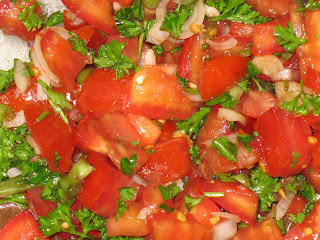 Oh that looks yummy! I never think to make panzanella ... I'll have to check out the tomatoes at the grocery store tomorrow.

Glad you liked it! Now, next time you have to try Tyler Florence's version - slightly different but still delicioso! ;)

That looks great. I've been meaning to try this too.

That looks so good! I love tomatoes.

Great job stretching yourself some. That looks great!

This looks great! My husband's boss just gave me a cookbook with a similar recipe. It is called
Fattoush. I will send the recipe to you. It has pita for the bread part, has the addition of lettuce and mint and uses lemon in the dressing.

yum. I've never made bread salad, but have had it in restaurants. Looking at your delicious one makes me wonder: "what am i waiting for?!" :)

Alisha - It is such a refreshing salad...I think even if they're not the BEST tomatoes that the vinegar would help.

Cate - I will definitely be trying different recipes over the summer. I think I just wanted to try the basic one the first time I did it.

Paula - Well, now that I've done it you need to!

Gail - Me too...had a tomato sandwich for lunch today.

Kristen - I don't get a chance to much anymore with school. I enjoyed it. Maybe I'll try a panzanella experiment this summer.

Linda - Thanks for the recipe...it looks great. DEFINITELY will try it and will post when I do.

I love panzanella. Now you've got me wanting some!