Hats Off to Caleb - The Party

Y'all, I just have absolutely no time to post these days!  By the time my day stops, I'm so tired and only have about an hour until bed time.  Anyway, we decided to have a hat theme for Caleb's party.  We have thought about dinosaurs or trains but since we think he looks really cute in a hat, we settled on hats. 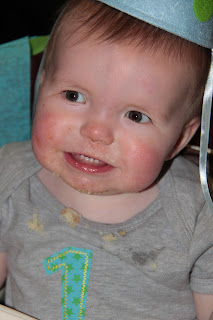 Oh my!  There is NOTHING hat themed out there.  I found some examples of hat cakes (which I used) but no themed snacks or anything.  Oh well!  We had the party the weekend of his birthday; I was on service at the hospital, so had to work. 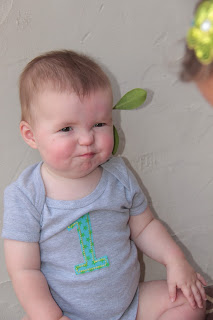 But it ended up being fine.  We just had family, some close family friends, and one of Caleb's school/church friends over.  It was simple and fun!  I did a little decorating with chalk banners. 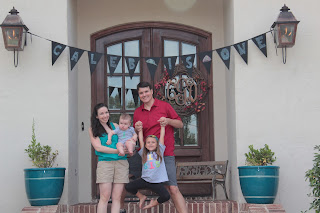 The one for the door said "Caleb is one."  Then I put a picture for each month on the other one and hung it over the fire place (it's still there! HA!). 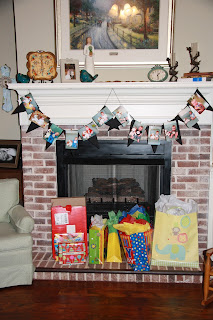 I thought it turned out cute.  For the snack table, we just put several of Caleb's little stuffed animal friends around wearing hats. 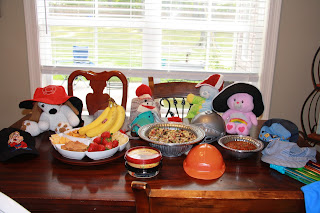 Everyone snacked and then we pulled out the cake.  The big cake was a two layer cake that I carved into the shape of a hat and decorated with fondant (this is actually a pretty tasty buttercream fondant). 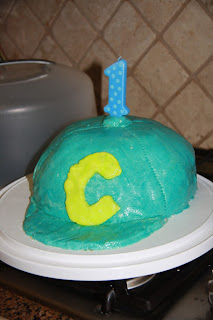 I thought it turned out really cute!  His smash cake was a "party hat" that I baked in sno cone cups. 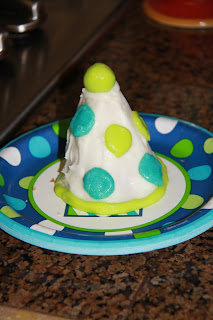 First we sang to him (and he tried to grab THIS cake). 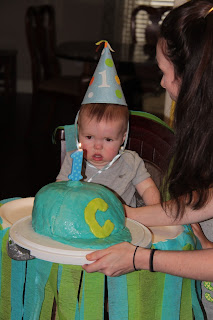 Then, when I gave him his smash cake, we had to put the first bite of cake in his mouth but after that he was a fan...and at the WHOLE thing!!! 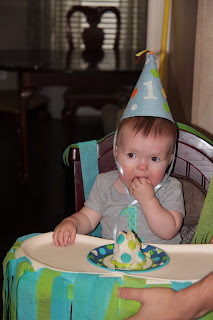 He just kept going and couldn't even stop to take a picture with Doc and Allie! 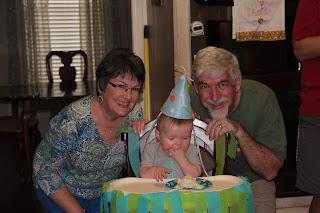 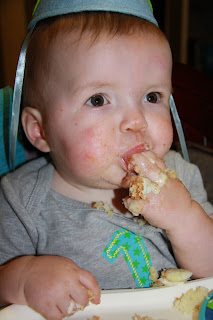 Can you tell he wanted more? 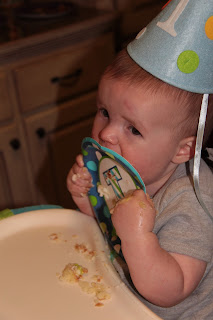 We opened presents after that.  Caleb did a pretty good job but had a short attention span...and ended up doing this: 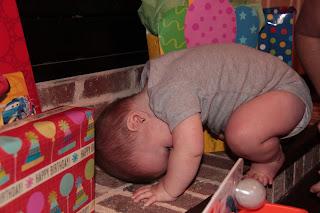 He liked the hammer toy the best but has since branched out to some of the other toys as well. 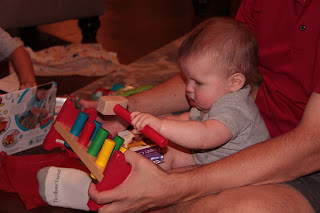 We had such a fun afternoon and are so thankful for all of our friends helping us celebrate. 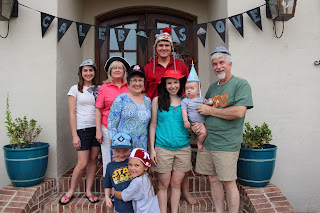 I can't WAIT to watch these two grow up together.  :-) 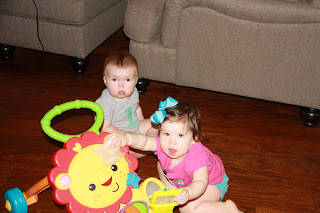