I have been looking forward to this week for a LONG time!  MANY months ago, partly because my dreaded boards were between then and now and partly because I just love Thanksgiving.  It is when my dad's entire side of the family gets together.  D had the week off and I took vacation as well.  We went to his family the first part of the week and then to mine the second half.  I always like to try new things and decided to try some bread pudding for dessert and macaroni and cheese for D.  It took a while to find a bread pudding recipe that I thought sounded interesting but this one sounded good and I had a bottle of read maple syrup to use.  In the end, it wasn't quite what I was looking for but was fairly good.  It ended up being a bit too sweet and definitely needed to be warm.  My cousin described it perfectly..."It's like eating pancakes!"  I did use "rustic" bread like the recipe suggested but would prefer a bit less tough bread next time.  D said it was good but I thought it was too sweet...you could probably decrease the amount of maple syrup without any damage done.  If anyone has any suggestions for bread pudding recipes, let me know! 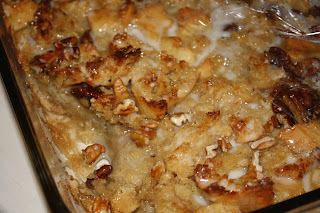 Preheat oven to 350. Tear bread into one-inch pieces.  Add bread to 13X9 pan. Toast for 5-10 minutes (would probably skip this next time). Mix milk, maple syrup, eggs, cinnamon, walnuts and salt and pour over heated bread.  Return pan to the oven and bake again for 30-45.  Top with a confectioner's sugar glaze (sugar + water to the desired consistency) if desired. Serve warm.
Posted by Unknown at 12:10 AM