So the title has nothing to do with the dish except that it has beans but I thought it was a cute title!  A couple of weeks ago I had a craving, a craving for a Mexican casserole.  Now, many times, casseroles can be very dense, soup laden and NOT very healthy.  However, I think I succeeded in making a healthy and yummy dish. 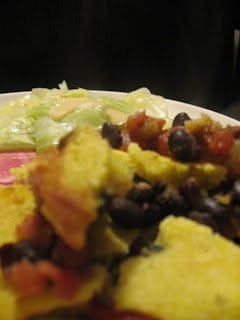 It's also easy!  I made a vegetarian version, but you could easily add some ground meat to it if you or your family prefers to have meat your meal.  The only problem was that the bean mixture wasn't quite "tall" enough.  This could easily be fixed by putting it in a smaller casserole dish. 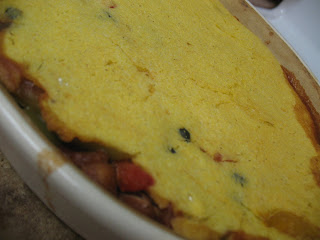 At first I debated about adding the Rotel tomatoes but, in the end, they added the perfect amount of spice.  I made my own cornbread using this recipe (and adding a couple of packs of splenda to sweeten it just a tad); however, you could use boxed mix if you prefer.  I made a thinner layer of cornbread, so I had leftover batter to make some corn muffins!  Yum!  This is the perfect, healthy dish to fix if you are craving casserole but don't want heaviness in your tummy! 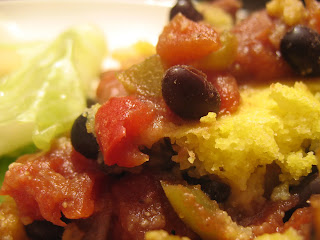 Preheat oven to 425 degrees F (or temperature instructed on your cornbread mix).  In a skillet, cook the veggies until thawed and warm.  Add beans, tomatoes, and spices.  Cook until hot and bubbly.  Put mixture in a casserole dish.  Place the cornbread mix on top of the bean mixture.  Cook until cornbread is golden and cooked through (I did 15 minutes).
Posted by Unknown at 6:34 PM

I like the title. What does B know? What is in the fajita frozen vegetables?

:-) The fajita veggies are just onions and bell peppers. I had it in my freezer and it was easy to use!

It looks good. Sometimes when you get a craving, you just gotta have it!

That sounds like a perfect winter warm-up dinner. I always make chili with a side of cornbread. This dish puts them together in one!

I love it with the cornbread! And I often buy the boca veggie crumbles; no one can ever tell they aren't beef!