So, the dinner thing with Sunday school ended up being REALLY small. Only one person came in addition to my teacher. It was still fun. I did stuffed peppers and banana white chocolate cream pie. Mr. Ray, SS teacher's husband, told her the next day that he really liked the peppers, so i think they will be using the recipe. She made a simple salad of Romaine lettuce, strawberries, and balsamic vinegarette. It was perfect! The banana pie is one that I made up. It's nice and light with good flavor combinations. Because it has bananas in it, and the tomatoes and peppers are full of anti-oxidants, this is my entry for Sweetnick's ARF Tuesday. Be sure to check out the other recipes later tonight. I'm sure I will...after I get back from seeing Elton John's Aida!!!
Stuffed Peppers
2-3 bell peppers, cut in half lengthwise
1/2 pound ground beef or turkey
1 cup long grain and wild rice*
2 T onion, chopped
1 garlic clove, pressed (use garlic powder if you don't have this)
dash Cayenne pepper
2 T cooking sherry
salt to taste
1/2 cup chopped provalone cheese + more to top peppers (unchopped)
1 15 oz. can stewed tomatoes (optional if you are allergic!) :-)

Bring a large pot of water to a boil. Cut the tops off the peppers and reserve (chop in small pieces). Cut the peppers in half and place in boiling water. Parboil for 10 minutes. In a skillet brown the meat. Remove and drain. Saute onion, garlic, and the chopped tops of the peppers. cook rice. Stir together meat, rice, onions, and cheese. In a casserole pour the tomatoes. Place parboiled peppers on top. Fill each pepper half with rice and meat mixture. Top with slices (doesn't have to be the whole slice) of cheese. Place in a 350 degree oven for 15 minutes.

Mix together pudding and 1 cup milk. Put in refrigerator to set. Cut banana into pieces and layer on the bottom of the pie crust. Sprinkle some of the heath pieces over this. 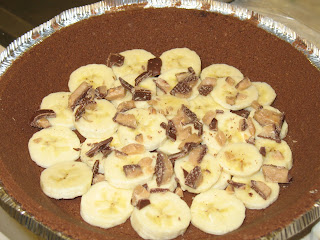 When pudding is set, fold in 1 cup cool whip. spread over the top of the bananas. Put in refrigerator until ready to serve. 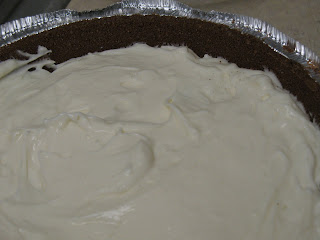 Top with remaining cool whip and sprinkle the top with the remaining heath pieces. 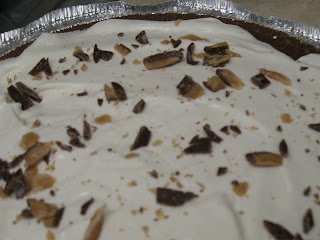 Sorry you didn't have a better turn out! Sounds like everyone else missed out though. :-) I bet it was still fun to do.

Oh I love Heath with banana and you don't see it much. Looks good.

I'm sorry you didn't have a better turn-out too, but I bet the others loved it! I know that pie looks incredible. I'm going to have to copy that one down, yummy :)

The hubby would like the stuffed peppers, but considering that I don't touch or eat bell peppers, he's going to have to live without that one. :)

Aida! Yay, bet it was good and so glad you got music for it.
The food looks good, sorry the others missed out!

Kristen - Thanks! It's pretty easy.

Erika - It's okay...I'm hoping next time will be better. It was definitely fun.

Peabody - They are a good combo, huh? Thanks!

Stacy - It's okay...still fun. I would say you should still try the peppers and just eat the filling (that's what my brother does and these are his favorite) but since you don't even TOUCH them...

Gail - Thanks! Aida was SO good. I definitely enjoyed it...now to make it to NYC sometime for a show on Broadway.

Seems like a delicious meal all around to me!

That pie is out of this worls. Ultimate comfort food on sunday dinners!